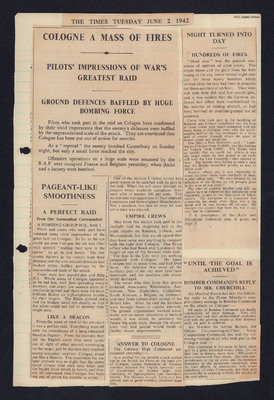 COLOGNE A MASS OF FIRES

Pilots who took part in the raid on Cologne have confirmed by their vivid impressions that the enemy’s defences were baffled by the unprecedented scale of the attack. They are convinced that Cologne has been put out of action for months.
As a “reprisal” the enemy bombed Canterbury on Sunday night, but only a small force reached the city.
Offensive operations on a large scale were resumed by the R.A.F. over occupied France and Belgium yesterday, when docks and a factory were bombed.

One of the stations I visited to-day has good reason to be satisfied with its part in the raid. When the call came through to prepare every available aeroplane they were able to muster 100 per cent. The station sent out squadrons of four-engined Lancasters and twin-engined Manchesters. Not a machine was lost or even hit and not a man was injured.

EMPIRE CREWS
Men from this station took part in the daylight raid on Augsburg and in the night attacks on Rostock, Lübeck, and Warnemünde, but they are all agreed that they have never seen anything to compare with the sight over Cologne. One flying officer who had flown over London at the height of one of the heaviest raids said: “The fires in the City were just nothing compared with Cologne.” He knew Cologne well in peace-time, and had lived there. He believed that most of the northern part of the city must have been destroyed, and the southern side extensively damaged.
The crews who flew from this station included Americans, Rhodesians, Australians, New Zealanders, Canadians, South Africans, a Belgian, an Irishman, and men from almost every corner of the British Isles. After the raid the bombers were brought home at regular intervals. The ground organization worked excellently and no major alterations in method would, it was stated, be necessary for future big-scale raids, though the experience they had gained would result in further minor improvements.

ANSWER TO COLOGNE
The German High Command announced yesterday: –
As a reprisal for the terrorist attack carried out by the British Air Force on the inner city of Cologne, strong formations of German bombers attacked the English episcopal city of Canterbury on Sunday night with thousands of high-explosive and incendiary bombs. The German aircraft, flying at a low altitude and in good visibility, observed large fires.

From Our Aeronautical Correspondent
A BOMBING GROUP H.Q., June 1
Pilots and crews who took part have retained some vivid impressions of the great raid on Cologne. So far as the eye could see over Cologne the air was filled with aircraft “waiting their turn in the queue” to go in and bomb. The few enemy fighters in the vicinity kept their distance and the anti-aircraft defences had broken down – baffled perhaps by the unprecedented scale of the attack.
There were few searchlights and little [italics] flay [/italics]. Whole areas of Cologne appeared to be red hot, with fires spreading every moment, and every few seconds more incendiaries ignited and there were the more brilliant flashes as high-explosive bombs hit their targets. The Rhine glowed red and the bridges stood out clearly, so that the pilots could not fail to identify their target area.

LIKE A BEACON
From the point of view of the attackers it was a perfect raid. Everything went off with the smoothness of a long-rehearsed Hendon Pageant. From the moment they left the English coast they were rarely out of sight of other aircraft converging on the target, and by the time they reached enemy-occupied territory Cologne stood out like a beacon. The opposition for the later arrivals was so slight that the crews could choose their own time when and the height from which to bomb, and they are all convinced that Cologne has been put out of action for months to come.

“Dead easy” was the general consensus of opinion of other crews. The bright moon and the glare from the fires raging in the city below turned night into day for those heavy bombers which arrived after the raid had been in progress for three-quarters of an hour. They were met with little [italics] flak [/italics] and few searchlights, and it was evident that the German defences had either been overwhelmed by the number of raiding aircraft, or had been bombed or machine-gunned out of existence.
Crews who took part in the bombing of Rostock and Lübeck considered that the fires in those towns were small compared with the fierce blaze at Cologne, even with the north-eastern half of the city enveloped in a thick pall of smoke through which the glare of flames could not penetrate.
One pilot, a New Zealander, said: “Looking on Cologne from 15,000ft. was like looking on Lübeck from 3.000ft. The flames were so terrific that we could not believe it was the target when we first picked it up while still over the Low Countries; they seemed so near. The bombs were falling at such a pace that the flashes resembled gunfire as seen in minor raids.”
Another officer said it was impossible to count the fires – there were hundreds of them. A pilot officer said: “We were blinded by the reflection of the flames on the Perspex glass in the nose of our craft.”
The pilot of another bomber said that the raiders were so numerous that aeroplanes were frequently caught in the slipstream of fellow raiders. The navigator of a Lancaster was consulting his maps when there was a big bump and he was thrown off his seat. He thought the aircraft had been hit, but it was only due to slipstream.
[symbol] A description of the Ruhr and Rhineland industrial area is given on page 3.

“UNTIL THE GOAL IS ACHIEVED”

Air Marshal Harris has sent the following reply to the Prime Minister’s congratulatory message to Bomber Command on the attack on Cologne: –
All ranks of Bomber Command are deeply appreciative of your message. They will pursue their task with undiminished resolution and with the growing means at their disposal until the goal is achieved.
Air Marshal Sir Arthur Barratt, Air Officer Commanding-in-Chief, Army Cooperation Command, has sent the following message to all who took part in the Cologne raid: –
This Command is fortunate to have taken part in a great historical event, when, for the first time in history, more than 1,000 aircraft have concentrated their attack. Heartiest congratulations to the air crews and maintenance personnel of the squadrons concerned, who by their efforts, in conjunction with other squadrons of other Commands, did their part successfully in assisting towards the success of the operations.