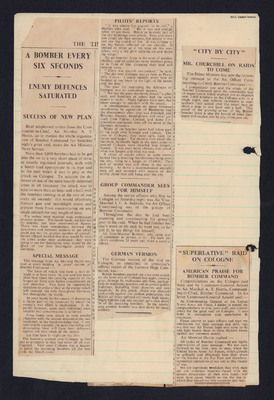 A BOMBER EVERY SIX SECONDS

Brief telephoned orders from the Commander-in-Chief, Air Marshal A.T. Harris, set in motion the whole organization of Bomber Command for Saturday night’s great raid, states the Air Ministry News Service.
More than 1,000 bombers had to be got into the air in a very short space of time, at exactly regulated intervals, each with a bomb load appropriate to its type and to the part which it was to play in the attack on Cologne. To saturate the defences of one of the most heavily defended areas in all Germany the attack was to take no more than an hour and a half, with the bombers coming in at the rate of one every six seconds: this would effectively distract gun and searchlight crews and prevent them from concentrating on any single aircraft for any length of time.
The orders were received with enthusiasm at every station. The bomb loads, worked out in pounds, ran into astronomical figures. There was keen competition between the squadrons and between stations to see which could put out the greatest number of aircraft. Senior officers decided that they would fly with the crews under their command; they were going to see for themselves what would be the effect of the first four-figure attack on Germany.

This message from Air Marshal Harris was read at every briefing in every station of Bomber Command: –
The force of which you form a part tonight is at least twice the size and has more than four times the carrying capacity of the largest air force ever before concentrated on one objective. You have an opportunity therefore to strike a blow at the enemy which will resound, not only throughout Germany but throughout the world.
In your hands lie the means of destroying a major part of the resources by which the enemy’s war effort is maintained. It depends, however, upon each individual crew whether full concentration is achieved.
Press home your attack to your precise objective with the utmost determination and resolution in the foreknowledge that, if you individually succeed, the most shattering and devastating blow will have been delivered against the very vitals of the enemy.
Let him have it – right on the chin.
The bombers arrived over Cologne as fast and as promptly as they had taken off all over England. Very soon Cologne was a beacon to guide the incoming bombers all the way from the Dutch coast.

“It was almost too gigantic to be real,” a Halifax pilot said. “But it was real enough when we got there. Below us in every part of the city buildings were ablaze. Here and there you could see their outlines, but mostly it was just one big stretch of fire. It was strange to see the flames reflected on our aircraft. It looked at times as if we were on fire ourselves, with a red glow dancing up and down the wings.”
An air bomber, lying in the nose of another Halifax, said he could see many bombers going in in front of him, dropping their load and turning away.
“There was aircraft everywhere,” he said. “The sky over Cologne was as busy as Piccadilly Circus. I could identify every type of bomber in our force by the light of the moon and the fires.”
The plan for saturating the defences of Cologne was an undoubted success.
“We had the guns absolutely foxed,” a pilot said, and hundreds of others had the same report to make. Night fighters were seen, but never enough to interfere with the attack.
A simultaneous swoop on many German aerodromes by squadrons of Blenheims had the diversionary effect that was intended, and Bostons, Havocs, Beaufighters, and other aircraft from Fighter, Coastal, and Army Cooperation commands drew off yet more of the German defenders.
Many of the bomber crews had taken part in the raids over Rostock and Lübeck. The fires of Cologne, they were sure, were far fiercer and larger. The dummy fires which the Germans habitually light in the open country around Cologne were dwarfed into insignificance. It was even more obvious than usual what was forgery and what was real.
A cloud of smoke which to some crews looked like a lowering thundercloud hung over the city, rising to a height of 15,000ft. The pall of smoke was still there in the early morning. At dawn a reconnaissance aircraft took off and returned with reports of the terrific cloud that still hung over the city.

GROUP COMMANDER SEES FOR HIMSELF

Among the senior officers who flew to Cologne on Saturday night was Air Vice-Marshal J.E.A. Baldwin, the Air Officer Commanding one of the groups of Bomber Command.
Throughout the day he had been planning and coordinating his group’s part in the raid. When he had finished his day’s work at his desk he went out, as he put it, to see things for himself.
Air Vice-Marshal Baldwin, who came out of retirement to service, is 50. He took his pilot’s certificate 28 years ago when a cavalry officer.

The German version of the raid on Cologne, as contained in yesterday’s official report of the German High Command, was: –
British bombers carried out a terrorist attack on the inner city of Cologne last night, causing great damage by explosions and fires, particularly in residential quarters and to several public buildings, including three churches and two hospitals. In this attack, which was directed exclusively against the civilian population, the British air force suffered extremely high losses. Night fighters and anti-aircraft guns shot down 36 of the attacking bombers. In the coastal area another bomber was shot down by naval artillery.

MR. CHURCHILL ON RAIDS TO COME

The Prime Minister has sent the following message to the Air Officer Commanding-in Chief, Bomber Command: –
I congratulate you and the whole of the Bomber Command upon the remarkable feat of organization which enabled you to dispatch over 1,000 bombers to the Cologne area in a single night, and without confusion to concentrate their action over the target into so short a time as one hour and a half. This proof of the growing power of the British bomber force is also the herald of what Germany will receive, city by city, from now on.

Congratulations on the Cologne raid were sent by Lieutenant-General Arnold to Air Marshal A.T. Harris, Commanding-in-Chief, Bomber Command. In his letter Lieutenant-General Arnold said:–
As Commanding General of the United States Army Air Force, I desire to extend my congratulations to you, your staff, and combat crews for the great raid on Cologne. It was bold in conception and superlative in execution.
Please convey to your officers and men my admiration for their courage and skill, and say that our Air Forces hope very soon to fly and fight beside them in these decisive blows against our common enemy.
Air Marshal Harris replied:–
All ranks of Bomber Command are highly appreciative of your message. We too look forward to the time, now so near, when the United States Army Air Forces, which already so gallantly and effectively bear their share of the burden in the Far East and elsewhere, commence operations at our side in this theatre of war.
We are supremely confident that with their aid our common enemies – faced with the certain devastation of their own lands – will soon have cause bitterly to rue the day on which they forced our two countries into war.