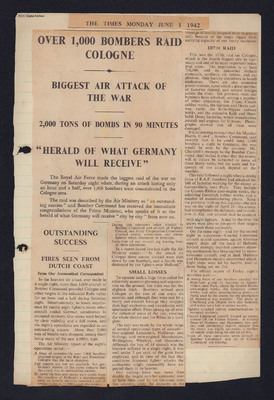 BIGGEST AIR ATTACK OF THE WAR

“HERALD OF WHAT GERMANY WILL RECEIVE”

The Royal Air Force made the biggest raid of the war on Germany on Saturday night when, during an attack lasting only an hour and a half, over 1,000 bombers were concentrated in the Cologne area.

The raid was described by the Air Ministry as “an outstanding success” and Bomber Command has received the immediate congratulations of the Prime Minister, who speaks of it as the herald of what Germany will receive “city by city” from now on.

From Our Aeronautical Correspondent

In the heaviest air attack ever made in a single night, more than 1,000 aircraft of Bomber Command pounded Cologne and other targets in the industrial Ruhr valley for an hour and a half during Saturday night. Simultaneously, to lessen interference by enemy night fighters, many other aircraft raided German aerodromes in occupied territory. Our crews were helped by clear visibility and a full moon, and the night’s operations are regarded as an outstanding success. More than 2,000 tons of bombs were dropped, among them being many of the new 4,000lb. type.

The Air Ministry report of the night’s operations stated:-

A force of considerably over 1,000 bombers attacked targets in the Ruhr and Rhineland. Cologne was the main objective.

Full reports are not yet available, but preliminary reports of the crews indicate that the attack was an outstanding success.

By dawn the fires and smoke were visible from the coastline of Holland; a reconnaissance early on Sunday morning reported a pall of smoke rising to 15,000ft. over the target.

During this operation other aircraft of Bomber Command and aircraft of Fighter, Coastal, and Army Cooperation Commands attacked enemy aerodromes and enemy fighters which attempted to intercept.

Forty-four of our aircraft are missing from all these operations.

In a report issued late last night the Air Ministry stated:- “In the attack on Cologne three enemy aircraft were shot down by our bombers, and a fourth was destroyed by our fighters over Holland.”

To operate such a huge force called for extremely accurate planning and organization on the ground, but there was not the slightest hitch. Bombers arrived over Cologne at the rate of one every six seconds, and although they were met by a heavy anti-aircraft barrage they dropped their high explosives and incendiaries with spectacular effect. Fires sprang up all over the industrial areas of the city, covering the whole district and the Rhine in a lurid glow.

The raid was made by the whole range of normal operational types of aircraft – four-engined Lancasters, Halifaxes, and Stirlings, and twin-engined Manchesters, Wellingtons, Whitleys, and Hampdens. Although the loss of 44 aircraft was the heaviest suffered in a single night, it was well under 5 per cent. of the great force employed, and in view of the fact that conditions favoured fighter attacks the authorities might reasonably have expected them to be heavier.

Our raiding force was more than double the largest number estimated ever to have been used by the Germans over this country, while the disparity in the tonnage of bombs dropped must be greater still, because of the much bigger load-carrying capacity of our heavy machines.

This was the 107th raid on Cologne, which is the fourth biggest city in Germany and one of its most important industrial areas. The population is at least 768,000, and its industries include chemicals, synthetic oil, rubber, and explosives. One factory specializes in bomb explosives. There are also extensive power stations, upon which a great number of factories depend, and several bridges across the river. On previous visits our bombers have attacked, among a number of other objectives, the Franz Clouth rubber works, the Gereon and Deutz railway yards, the Köln-Nippes railway works, and the extensive Kalk and Humboldt Deutz factories, which manufacture aircraft and engines for U-boats. Photographs showed that all these were damaged.

It is interesting to recall that Air Marshal Harris, C.-in-C., Bomber Command, said recently that if he could send 1,000 bombers a night to Germany, the war would be over by the autumn. Mr. Churchill’s message to the Bomber Command chief makes it clear that the enemy will in future be subjected to more of these heavy raids, but the scale and frequency of our attack depend on the weather.

This raid followed a night when a strong force of R.A.F. bombers had attacked the belt of factories working for the enemy at Gennevilliers, near Paris. They include the Gnome-Rhône aero-engine works, the adjoining Goodrich rubber works, and a number of manufacturing plants. Since the previous raids on this locality – the last was on the night of April 29 – the enemy had strengthened the defences, and in addition to [italics] flak [/italics] our aircraft had to contend with night fighters. Aided by the river the crews were able to pin-point their targets and bomb them accurately.

On the same night – and for the second night in succession – Coastal Command aircraft scored successes against German supply ships off the coast of Holland. Several strongly escorted convoys steaming northwards had been sighted by reconnaissance aircraft, and at dusk Hudsons and Hampdens made a determined attack. Eight ships were hit by bombs, four of them being set on fire.

A strong force of our bombers attacked the important group of factories at Gennevilliers, near Paris, where the Gnome-Rhône aero-engine works, the Goodrich rubber works, and other manufacturing plants are being used by the enemy for the production of important war material. The docks at Cherbourg and Dieppe were also bombed, and mines were laid in enemy waters.

Coastal Command aircraft located an enemy convoy off the Frisian Islands. A striking force of Hudsons and Hampdens was sent out, and preliminary reports indicate that the attack was highly successful, a number of supply ships being hit and set on fire.

From all these operations seven aircraft of Bomber Command and six of Coastal Command are missing.