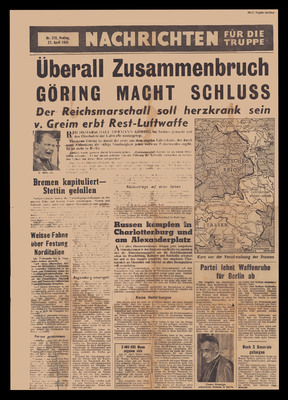 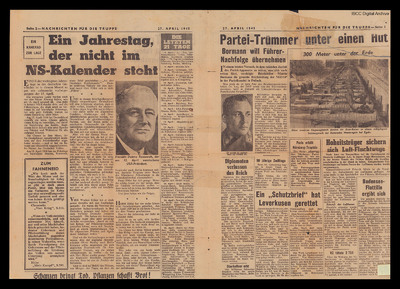 Reichsmarschall Hermann Göring resigns as Supreme Commander of the Luftwaffe for health reasons. His replacement is [Robert Ritter] von Greim. Setbacks described in multiple locations: lower Oder; northern Italy; several places in south, with American tanks 50km from Munich; German-Swiss border from Basle to Lake Constance; Sudentenland and the Protectorate; Soviets advancing on heart of Berlin where resistance faltering with access to limited reinforcements. Ceasefire proposal rejected from Papal Nuncio in Berlin to end civilian deaths and evacuate women and children from food shortages and widespread dysentery. 2,405,435 men surrendered since start of invasion. Five generals surrendered in the west.
Anniversary of [14 April 1939] President Roosevelt’s letter to German Reich Chancellor, seeking declaration from Hitler that he had no intention of entering war of aggression. Hitler saw it as weakness and now there is destruction everywhere. Need to save what can be re-built. Contrasting quotations from [Carl von] Clausewitz’s ‘Vom Krieg’ [Of War] and Hitler’s ‘Mein Kampf’. Last three weeks’ events listed.
Reichsleiter Martin Bormann to succeed as Führer, having consolidated Nazi leadership in Party Chancellery. Photograph of aircraft factory found by Americans in abandoned salt mine in Egeln. Diplomats abandoning the Reich. Major-General Erdmann, accused by authorities, of going against party orders, to issue letters of protection to save I.G. Farbenindustrie in Leverkusen and other large industries in the west of the Reich. Lufthansa A.G., national airline, acquired by Party Chancellery to have long flights at its disposal. Senior posts reshuffled as a result. Entire Lake Constance Flotilla surrenders. 1,152 V2s fell on British soil, 2,754 people killed and 6,523 injured.