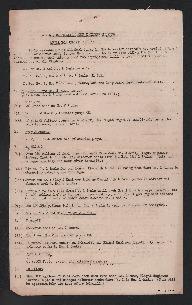 A document to be used by the Flight Engineer covering drills for use of fuel tanks, Lancaster Mk I and III drills for pre-starting and starting, taxying, take-off, landing, engine stopping, propeller feathering and unfeathering drill, drill for fire in an engine in the air, Mark VIII auto pilot and auxiliaries driver by each engine.