The collection was catalogued by Nigel Huckins. 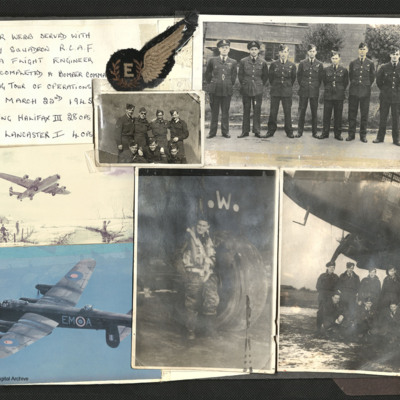 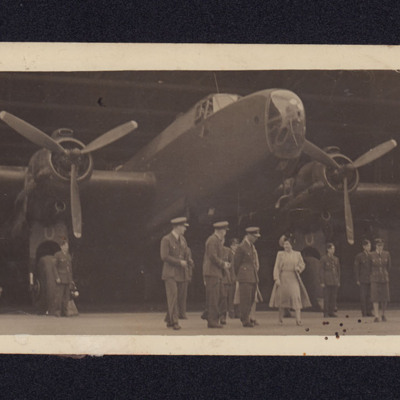 A group of RAF personnel in uniform gathered round a Halifax in a hangar. In the centre H M the Queen talks to three officers. On the reverse 'P L Webb, right - next to Queen'. 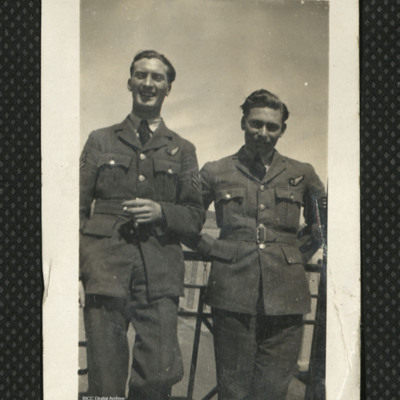 Three-quarter length image of two airmen wearing tunics with half brevet standing in front of a low fence. On the reverse 'P L Webb, R'. 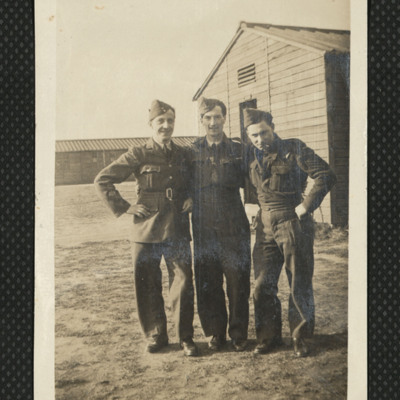 Three aircrew, two wearing battledress and the other a tunic, all with side caps, standing arm in arm in front of a wooden hut. On the reverse 'P L Webb, R'. 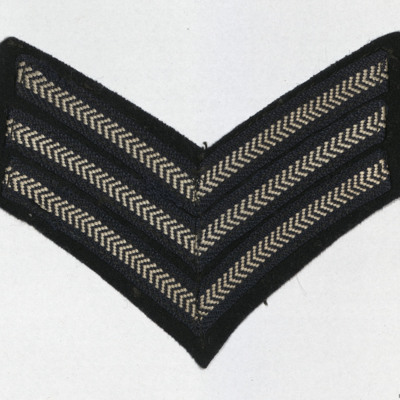 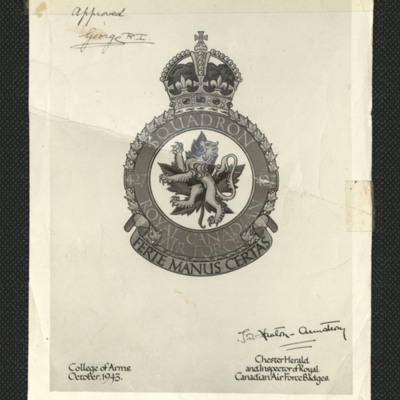 A crest for 427 Squadron with approval from King George VI.

Letters in a newspaper cutting 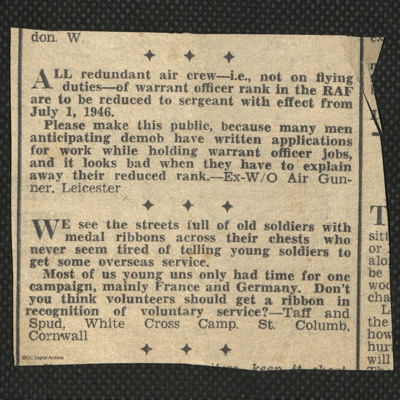 Two letters, the first referring to RAF warrant officers being reduced in rank to sergeants from 1 July 1946 and the second about older veterans mocking young soldiers for not having overseas service ribbons. 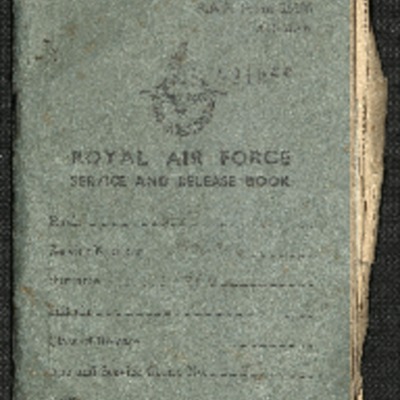 Issued to Peter Webb covering his service from November 1943 to March 1947. 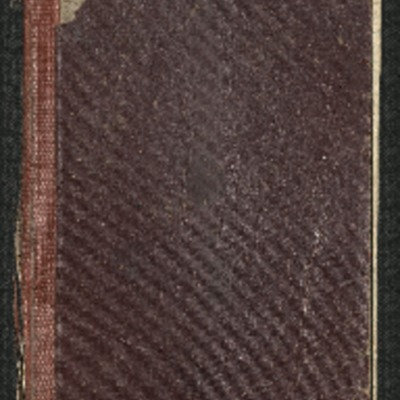 A notebook used by Peter Webb to record lecture notes regarding engine systems, instruments and electrics. 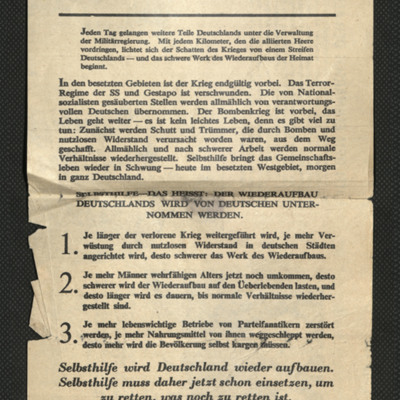 Report from western Germany. One page of a propaganda leaflet produced by the Psychology War Department and Supreme Headquarters Allied Expeditionary Force. The second page is absent, but both pages are translated into English. 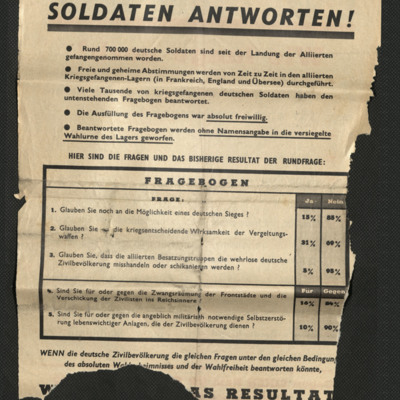 A propaganda leaflet directed at the German population produced by the Psychology War Department and Supreme Headquarters Allied Expeditionary Force. One page is missing but both pages are translated into English. 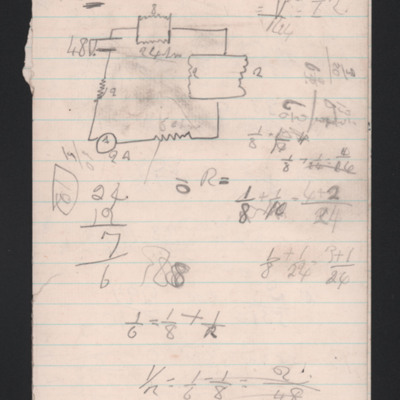 Notes made related to electrical systems. 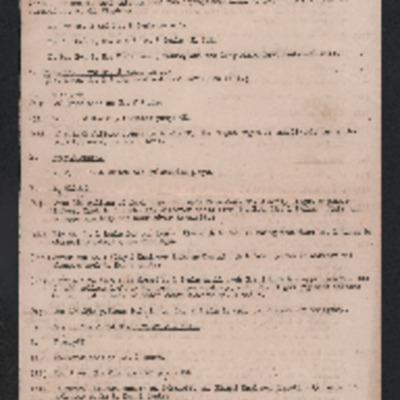 A document to be used by the Flight Engineer covering drills for use of fuel tanks, Lancaster Mk I and III drills for pre-starting and starting, taxying, take-off, landing, engine stopping, propeller feathering and unfeathering drill, drill for fire… 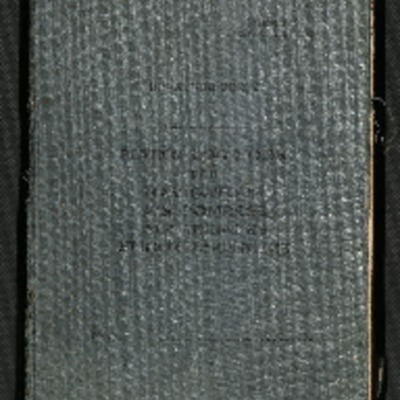 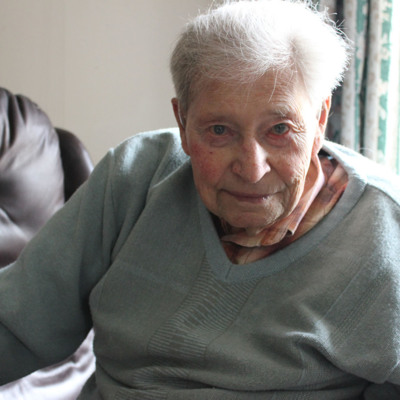 Lacey Peter Webb remembers his role as a flight engineer in the Royal Air Force during the war and flying thirty operations on Halifaxes and two on Lancasters. Retraces his training in various stations, among them St John’s Wood, where he was…
View all 17 items