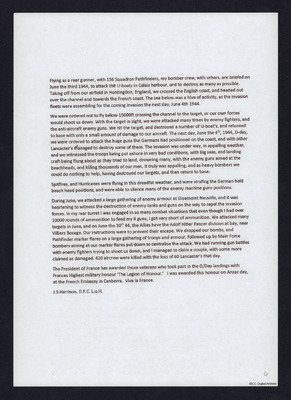 A short memoir about operations over France before and after D-day. Includes how he received his award (as a D-Day veteran) of the Légion d'Honneur in Canberra.

Flying as a rear gunner, with 156 Squadron Pathfinders, my bomber crew, with others, are briefed on June the third 1944, to attack the U-boats in Calais harbour, and to destroy as many as possible.
Taking off from our airfield in Huntingdon, England, we crossed the English coast, and headed out over the channel and towards the French coast. The sea below was a hive of activity, as the invasion fleets were assembling for the coming invasion the next day, June 4th 1944.
We were ordered not to fly below 15000ft crossing the channel to the target, or our own forces would shoot us down. With the target in sight, we were attacked many times by enemy fighters, and the anti-aircraft enemy guns. We hit the target, and destroyed a number of U-boats, and returned to base with only a small amount of damage to our aircraft. The next day, June the 4th, 1944, D-day, we were ordered to attack the huge guns the Germans had positioned on the coast, and with other Lancaster’s engaged to destroy some of them. The invasion was under way, in appalling weather, and we witnessed the troops being put ashore in very bad conditions, with big seas, and landing craft being flung about as they tried to land, drowning many, with the enemy guns aimed at the beachheads, and killing thousands of our men. It truly was appalling, and as heavy bombers we could do nothing to help, having destroyed our targets, and then return to base.
Spitfires, and Hurricanes were flying in this dreadful weather, and were strafing the German held beach head positions, and were able to silence many of the enemy machine guns positions.
During June, we attacked a large gathering of enemy armour at Oisemoint Neuville, and it was heartening to witness the destruction of enemy tanks and guns on the way to repel the invasion forces. In my rear turret I was engaged in so many combat situations that even though I had over 10000 rounds of ammunition to feed my 4 guns, I got very short of ammunition. We attacked many targets in June, and on June the 30th 44, the Allies have the Adolf Hitler Panzer division at bay, near Villiers Bocage. Our instructions were to prevent their escape. We dropped our bombs, and Pathfinder marker flares on a large gathering of troops and armour, followed up by Main Force bombers aiming at our marker flares put down to centralise the attack. We had running gun battles with enemy fighters trying to shoot us down, and I managed to claim a couple, with some more claimed as damaged. 420 aircrew were killed with the loss of 60 Lancaster's that day.
The President of France has awarded those veterans who took part in the 0/Day landings with Frances Highest military honour 'The Legion of Honour.' I was awarded this honour on Anzac day, at the French Embassy in Canberra. Viva la France.
J.S.Harrison, D.F.C. L.o.H.