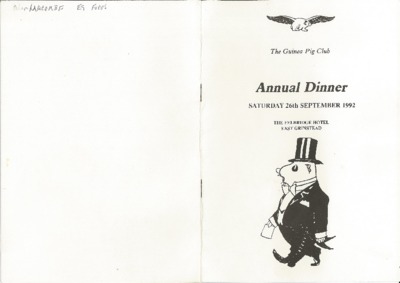 [Page Break]
THE PLASTIC SURGEON
ITS HABITS, DIET AND BEHAVIOUR
A study in Unnatural History
Introductory
The Plastic Surgeon is my theme
So Muse, inspire my song,
For, though the subject odd may seem,
I would not do him wrong.
His habitat is Harley Street,
His prey the Wart and Scar,
And though he has enormous feet,
He chiefly moves by car.

THE GUINEA PIG ANTHEM
We are McIndoe’s army,
We are his Guinea Pigs.
With dermatomes and pedicles
Glass eyes, false teeth and wigs,
And when we get our discharge
We’ll shout with all our might:
“Per ardua ad astra”
We’d rather drink than fight.

John Hunter runs the gas works,
Ross Tilley wields a knife
And if they are not careful
They’ll have your flaming life.
So, Guinea Pigs, stand ready
For all yours surgeons’ calls:
And if their hands aren’t steady
They will whip off both your ears.

We’ve had some Australians,
Some French, Some Czechs, Some Poles;
We’ve even had some Yankees,
God bless their precious souls.
While as for the Canadians –
Ah! That’s a different things.
They couldn’t stand our accent
And built a separate Wing.

We are McIndoe’s army,
(as first verse)