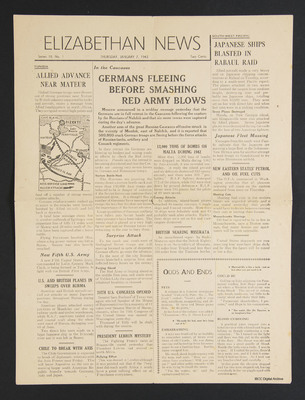 Front page of military newsheet, Series 10 Issue 1. Two cents. Covering world wide military activity. Leading articles cover advances by the allied forces in North Africa and Russian successes in the East. Shorter reports on attacks on the Japanese base at Rabaul and air attacks over Burma. Other notes mention the campaign based around Malta and the shortage of fuel in the eastern American states. There is also an Odds and Ends column.