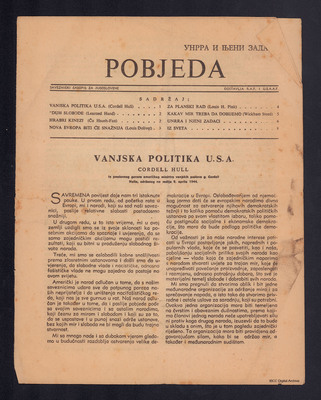 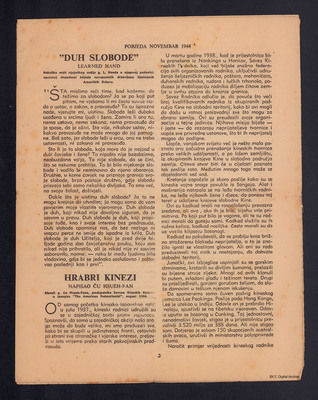 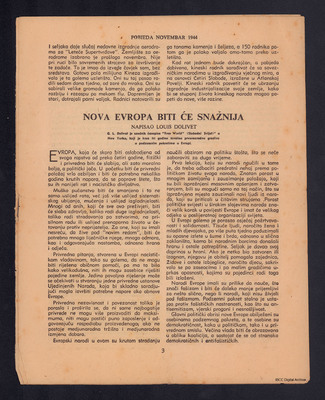 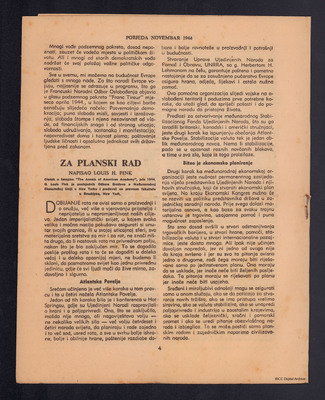 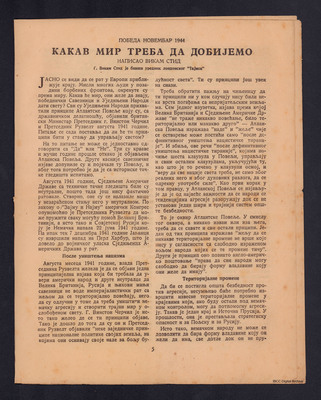 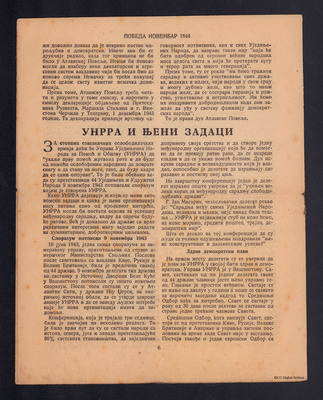 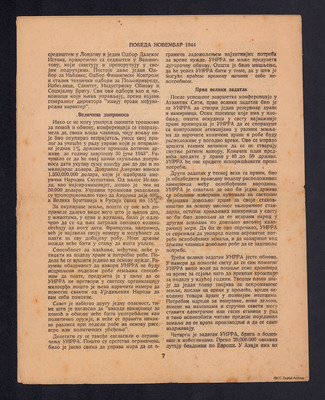 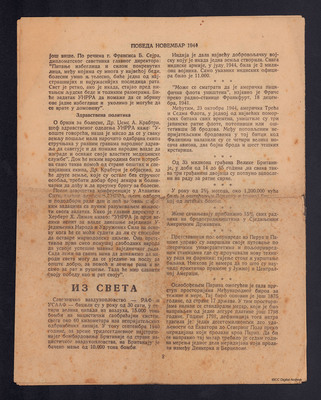 Celebrates the achievements of the allies of Yugoslavia and describes the progress towards the goal of world peace.

The first article, "The Foreign Policy of the U.S.A.", is written by U.S. Minister of the Foreign Affairs Cordell Hull. It deals with the foreign policy of the United States stressing that the might of the Allies has increased during the war. While it is necessary to totally defeat the enemies, all the allied nations should make their best efforts for the success of democracy in the aftermath. The creation of an international organization to prevent further aggression is also on the cards.

The second article, "The spirit of freedom" is authored by the American judicial philosopher Learned Hand, who elaborates on meaning of the word "freedom". Taken from a speech delivered to 150.000 new U.S. citizens, it discusses the "spirit of freedom": it is better felt than described, is a matter involving everyone, and should be unselfish.

The third article is written by Chu Hsueh-Fan, president of the Chinese Federation of Labour. Titled “The brave Chinese people" it celebrates the efforts made by the Federation and the Chinese workers since 1937 – they moved as many tools and machinery as possible as to rebuild factories away from the territories controlled by the Japanese invaders. Examples include Lee Paoking, who allegedly walked 3520 miles in 388 days, and the construction of a heavily defended airport that involved the labour of 500.000 workers.

The fourth article, by Louis Dolivet, claims that only the United Nations and the free market are the solution to the devastation caused by the Nazi war. "The new Europe will be stronger" - the title says - thanks to increased solidarity towards the persecuted. The new Europe is going to be democratic, inspired by the democracy of undercover Resistance movements.

The fifth article, by Louis H. Pink, is taken from the July 1944 issue of the magazine "The Annals of the American Academy". Titled "For a planned work" it deals with the necessity to avoid selfish economic competition that would lead to another war. It argues for considering the world as a single economy, a space where people could live in happiness and safety. The United Nations Relief and Rehabilitation Administration (UNRRA) and the Financial Stability Facility of the United Nations are cited as positive examples. The Permanent Council of the United Nations is going to make an economic plan of the world, as to increase mutual help between the "civilized nations".

The sixth article, titled "Which peace we should get", bears the signature of the former director of the London Times and illustrates the main principles upon which the upcoming world is going to be based. The Atlantic Charter (1941) is cited for the intent to forsake to the deployment of force, but only after having disarmed the Germans, who are deemed temporarily incapable of behaving peacefully. Other Anglo-American principles to be understood on the basis of the Charter are the inalterability of national boundaries, the right to democracy, but also the need for making territorial adjustments as to prevent further German aggression. The latter is especially needed for East Prussia. The article closes by acknowledging the Declaration from the Conference of Teheran (1943), and its statements about the United Nations working for a long-lasting peace.

The seventh article, uncredited, is titled "The U.N.R.R.A. and its tasks". It summarizes the history of the organization starting from the initial outline devised by the Minister of the Foreign Affairs of the U.S. and the governments of China, Russia and Great Britain that was sent to the 44 United Nations. The United Nations Relief and Rehabilitation Administration was founded in Atlantic City (New Jersey) on November 9th 1944, followed by a 3-week conference. Jan Masaryk is quoted saying that the UNRRA was the most important step towards a long-lasting democratic peace. The article continues describing the functioning of the UNRRA: its governing body made of the 44 national delegates and a Central committee that takes the lead between the quarterly meetings of the delegates. It also mentions two more boards: the European committee in London and the East Asian committee also temporarily headquartered there. The conclusion underlines the historical importance of the contribution of the organization with its financial statement of 2/2.5 billion of 1943 U.S. dollars directed towards the relief of the peoples liberated during the war without expecting a repayment from the poorer nations. Tasks are food and commodities supply, with an increasing focus "to help every United nation to help itself".

The eight part of the magazine is the news section. Concerns for the health of 20.000.000 homeless refugees and the effort of the UNRRA to send medical personnel; the bombing of Germany by the allied air forces (15.000 tons of bombs in a month) being compared with the bombing of London in 1940 (10.000 tons per month); the Indian Army strength of 2.000.000 soldiers and 11.000 officers; Third and Seventh U.S. fleet sank 3 Japanese fleets with 58 ships on October 23th 1944; employment in war factories is one of out of three for a total 33 million of British workers; damage caused by the Nazi bombings to 1.2 million British households; the percentage (15%) of female workers in U.S. shipyards; experienced Peruvian and Panama farmers studying new techniques in the U.S. to be applied in Central and South America; liberation of Paris and the restored access to The International Bureau of Weights and Measures.