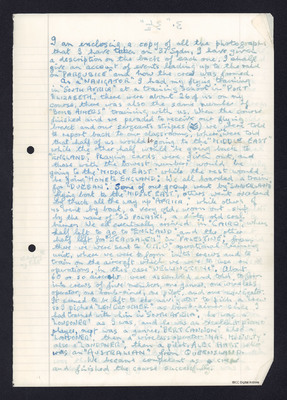 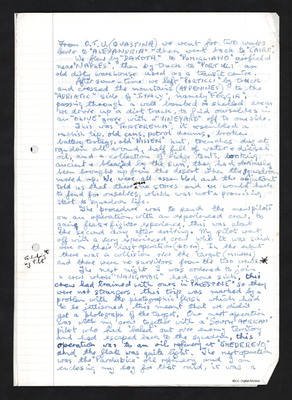 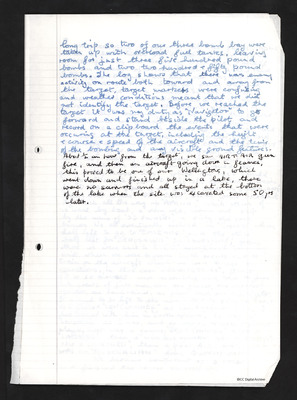 An account by Ted Neale of his training in South Africa, subsequent further training in Jerusalem, crew selection and transfer to Italy. He relates early experiences on operations - including Shederevo oil refinery - and losing a Wellington to enemy aircraft. during the Pardubice oil refinery operation.

I am enclosing a copy of all the photographs that I have taken on 37 Sqdn, I have given a description on the back of each one. I shall give an account of events leading up to the raid on “PARDUBICE” and how the crew was formed.

As a “NAVIGATOR” I hade my flying training in “SOUTH AFRICA” at a training school in “PORT ELIZABETH”., there were about 26 of us on my course, there was also the same number of “BOMB AIMERS’ training with us. When the course finished and we paraded to receive our flying brevet and our sergeants stripes ([symbol]) we were told to report back to our classrooms, where we were told that half of us would be going to the “MIDDLE EAST” while the other half would be going back to “ENGLAND”. Playing cards were given out, and those with the lowest numbers would be going to the “MIDDLE EAST” while the rest would be going “HOME to ENGLAND’. We all boarded a train for “DURBAN”. Some of our group went by “SUNDERLAND” flying boat to the “MIDDLE EAST”, others went overland by truck all the way up “AFRICA”, while others of us went by boat, a very old, worn out ship by the name of “SS POLASKI”, a dirty old coal burner. We all eventually arrived in “CAIRO”, where half left for “JERUSALEM” in ‘PALESTINE”, from there we were sent to “O.T.U”, operational training unit, where we were to form in to crews and to train on the aircraft which we were to use on operations, in this case “WELLINGTONS”. About 60 or so aircrew were assembled and told to form into crews of five members, one gunner, one wireless operator, one bomb-aimer, one pilot, and one navigator. It seemed to be left to the navigator to pick a crew so I picked “LEN CROUCHER” as bomb-aimer since I had trained with him in “SOUTH AFRICA”, he was a “LONDONER” as I was, and he was an excellent piano player, next was a gunner, “BERT CANNON” also a “LONDONER”, then a wireless operator “MAC McNULTY” also a “LONDONER”, then a pilot, ALEC HART who was an “AUSTRALIAN” from QUEENSLAND.

We became competent as a crew and finished the course successfully.

From O.T.U. (QUASTINA) we went for two weeks leave to “ALEXANDRIA” then went back to “CAIRO”.

We flew by “DAKOTA” to “POMIGLIANO” airfield near “NAPLES”, then by truck to “PORTICCI” an old dirty warehouse used as a transit centre.

After some-time we left “PORTICCI” by truck and crossed the mountains (APPENINES) to the “ADRIATIC” side of “ITALY”, namely “FOGGIA”, passing through a well bombed or shelled area we drove up a dirt track, to find ourselves in an “OLIVE” grove with a “VINEYARD” off to one side.

This was “TORTORELLA”, it resembled a rubbish tip, old cans, petrol drums, broken battery trolleys, old “NISSEN” hut, trenches dug at random all around, half full of water & diesel oil, and a collection of ridge tents, looking ancient & bleached by the sun, they had obviously been brought up from the desert when the squadron moved up. We were all assembled and the adjutant told us that there were no stores and we would have to fend for ourselves, which was not a promising start to squadron life.

The procedure was to send the new pilots on an operation, with an experienced crew, to gain flak & fighter experience, this was about the second day after arriving. My pilot went off with a very experienced crew who it was said were on their last operation (40th). In the event there was a collision over the target (MILAN) and there were no survivors from the two crews. [inserted] Including my Pilot [/inserted]

The next night I was ordered to join a crew whose “NAVIGATOR” had gone sick, this crew had trained with ours in “PALESTINE” so they were not strangers, this trip was marked by a problem with the photographic flash which had to be jettisoned, this meant that we didn’t get a photograph of the target. Our next operation was with my crew together with a “SOUTH AFRICAN” pilot who had “baled” out over enemy territory and had escaped back to the squadron, this operation was to an oil refinery at “SMEDEREVO”, and the flak was quite light. The next operation was the “Pardubice” oil refinery and I am enclosing my log for that raid, it was a

long trip so two of our three bomb bay were taken up with overload fuel tanks, leaving room for just three five hundred pound bombs and two two hundred and fifty pound bombs. The log shows that there was enemy activity on route both toward and away from the target. Before we reached the target it was my duty as “Navigator” to go forward and stand beside the pilot and record on a clipboard the events that were occurring at the target, including the height & course & speed of the aircraft and the time of the bombing and any visible ground feature. About 1/2 an hour from the target, we saw AIR TO AIR gun fire, and then an aircraft going down in flames, this proved to be one of our Wellingtons, which went down and finished up in a lake, there were no survivors and all stayed at the bottom of the lake when the site was excavated some 50 yrs later.