Three letters to Mrs Redgrave from the Royal Air Force 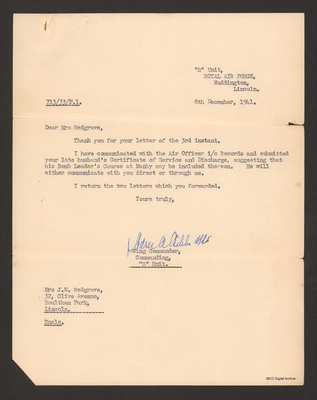 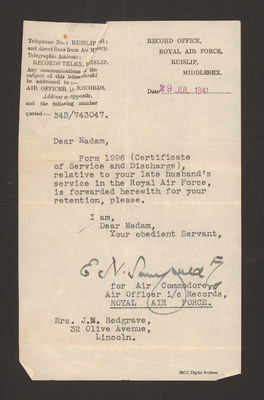 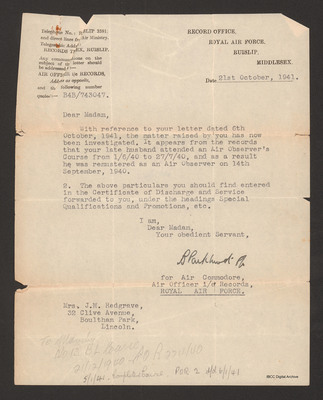 Three letters to Mrs Redgrave from the Royal Air Force

Thank you for your letter of the 3rd instant.

I have communicated with the Air Officer i/c Records and submitted your late husband’s Certificate of Service and Discharge, suggesting that his Bomb Leader’s Course at Manby may be included thereon. He will either communicate with you direct or through me.

I return the two letters which you forwarded.

Dear Madam,
Form 1996 (Certificate of Service and Discharge), relative to your late husband’s service in the Royal Air Force, is forwarded herewith for your retention, please.

I am,
Dear Madam,
Your obedient Servant,

With reference to your letter dated 6th, October, 1941, the matter raised by you has now been investigated. It appears from the records that your late husband attended an Air Observer’s Course from 1/6/40 to 27/7/40, and as a result he was remustered [sic] as an Air Observer on 14th September, 1940.

2. The above particulars you should find entered in the Certificate of Discharge and Service forwarded to you, under the headings Special Qualifications and Promotions, etc.

I am,
Dear Madam,
Your obedient Servant,
B Parkhurst pp