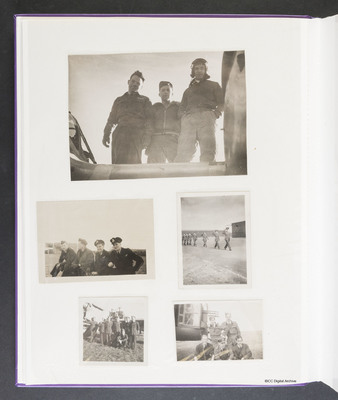 Top - three aircrew standing on the wing of an aircraft. David Donaldson on the left is wearing battledress with pilot brevet, the middle one is wearing a flying jacket and side cap, the one on the right is wearing a flying helmet. From right to left: Lieutenant Vaughn, pilot 7th Photographic Reconnaissance Group United States Army Air Force, unknown American ground personnel and David Donaldson. Note on reverse reads 'USAF flight with 192 Foulsham 1945'. David Donaldson's logbook suggest this was related to a flight in a P-38 Lightning on 3 March 1945. Middle left - four aircrew all two wearing peaked caps and two side caps all sitting in a row. In the background a Nissen hut and other buildings. Middle right - Royal Air Force personnel marching past. Front four officers in line are saluting. They are identified on the reverse as from left to right: Roy Kendrick, Warrant Officer Adam, Lauden and Wing Commander Donaldson. In the background hangars. Bottom left - a group of aircrew officers with two sitting on top of a wing and the others standing in front of the wing of a Hawker Henley aircraft. Bottom right - five Royal Air Force Personnel three wearing battledress two standing and three squatting down by the tail turret of an aircraft. Additional information about this item was kindly provided by the donor.