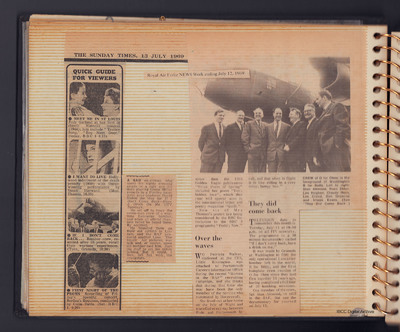 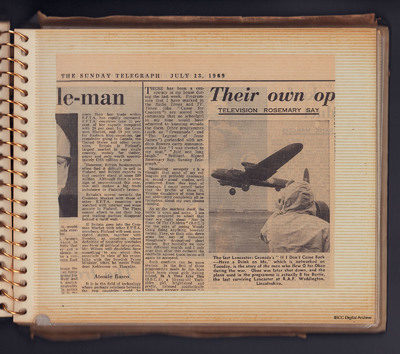 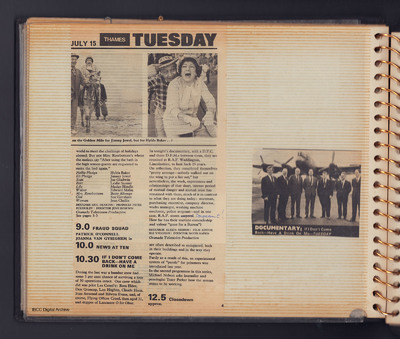 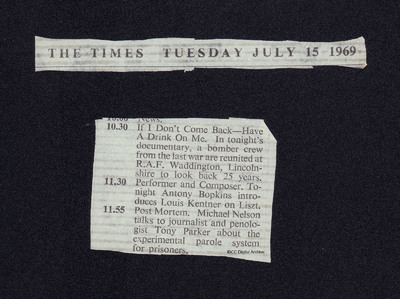 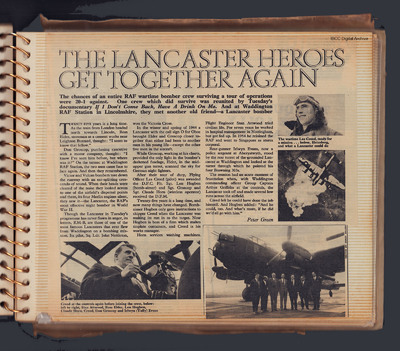 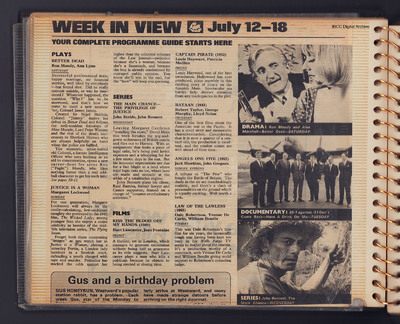 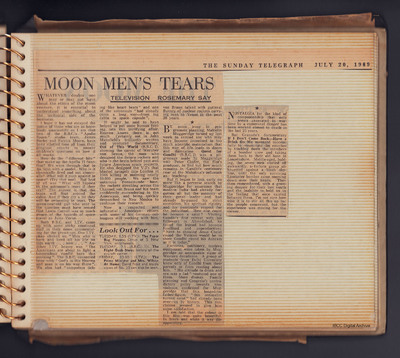 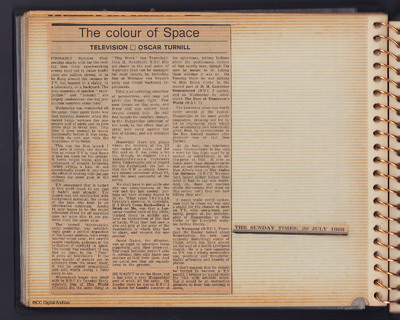 11 newspaper cuttings from eight pages of a scrapbook

[photograph]
I WANT TO LIVE Hollywood indictment of the death penalty (1959) with Oscar-winning performance by Susan Hayward. (Mon. Thames, 10.30)

A SAD ex-airman who spent his nights dressing salads in a cafe and his days playing Glenn Miller records in a Pimlico basement gave producer David Naden the idea for [italics] If I Don’t Come Back – Have A Drink On Me [/italics] (ITV Tuesday).

He set off to trace the seven-man crew of a war-time Lancaster bomber, and when all official channels failed he found them. By accident.

He reunited them on their old airfield in Lincoln, and the RAF produced another Lanc. The result: Air pictures, war talk and, of course, some old bomber-raid film. Just the stuff to set the oldies talking. But it could, I fear, fall flat with the youngsters.

[Photograph]
CREW of O for Oboe in the foreground of Waddington B for Betty. Left to right: Stan Attwood, Ross Elder, Len Hogben, Claude Horn, Les Creed, Don Groscop and Irlwyn Evans. (See “They Did Come Back”.)

since then the 1969 Golden Eagle publication “Prize Poets of Spring” included her peom “Forbidden love”, which this year will appear also in the international letter and poetry magazine “Quill.”

Now six of Mrs Thomas’s poems are being considered by the BBC for inclusion in the BBC 3 programme “Poetry Now.”

WO Patricia Walker, stationed at the CFS, Little Rissington was attached to Portsmouth Careers Information Office during the recent “Women in the RAF” recruiting campaign, and she thinks that during that time she may have been the only member of the Service who commuted by Hovercraft.

She lived out at her home on the Isle of Wight and travelled every day between Ryde and Portsmouth by cab, and that when in flight it is like riding in a very noisy, bumpy bus.”

They did come back

TELEVISION date to remember this month is Tuesday, July 15 at 10.30 p.m. on all ITV networks. The programme is a 50 minute documentary called “If I don’t come back, have a drink on me.”

It was made by Granada at Waddington to film the only operational Lancaster bomber left in the world, B for Betty, and the first complete crew reunion of O for Oboe since they last flew together 25 years ago, having completed a full tour of 30 bombing missions.

One member of the crew, Sgt Stan Attwood, is still in the RAF. But see the documentary for yourself on July 15.

[Photograph]
The last Lancaster: Granada’s “If I Don’t Come Back – Have a Drink on Me,” which is networked on Tuesday, is the story of the men who flew O for Oboe during the war. Oboe was later shot down, and the plane used in the programme is actually B for Bertie, the last surviving Lancaster at R.A.F. Waddington, Lincolnshire.

During the last war a bomber crew had some 5 per cent chance of surviving a tour of 30 operations intact. One crew which did was pilot Les Creed’s: Ross Elder, Don Groscop, Len Hogben, Claude Horn, Stan Attwood and Rilwyn Evans, and, of course, Flying Officer Creed, then aged 21, and skipper of Lancaster O for Oboe.

In tonight’s documentary, with a D.F.C. and three D.F.M.’s between them, they are reunited at R.A.F. Waddington, Lincolnshire, to look back 25 years.

On reflection, they considered themselves “pretty average – nobody walked out on the wing to put a fire out,” but nevertheless, the work, experiences and relationships of that short, intense period of mutual danger and mutual trust has remained with them, much of it in contrast to what they are doing today : storeman, purchasing executive, company director, works manager, washing machine mechanic, police sergeant – and in one case, R.A.F. stores [deleted] corporal. [/deleted] [inserted] Sergeant! [/inserted]
How far has their wartime comradeship and valour “gone for a Burton”?

[Photograph]
DOCUMENTARY: If I Don’t Come Back – Have A Drink On Me – TUESDAY

10.30 If I Don’t Come Back – Have A Drink On Me. In tonight’s documentary, a bomber crew from the last war are reunited at R.A.F. Waddington, Lincolnshire to look back 25 years.
11.30 Performer and Composer. Tonight Antony Bopkins introduces Luis Kentner on Liszt.
11.55 Post Mortem. Michael Nelson talks to journalist and penologist Tony Parker about the experimental parole system for prisoners.

THE LANCASTER HEROES GET TOGETHER AGAIN

The chances of an entire RAF wartime bomber crew surviving a tour of operations were 20-1 against. One crew which did survive was reunited by Tuesday’s documentary [italics] If I Don’t Come Back, Have A Drink On Me [/italics]. And at Waddington RAF Station in Lincolnshire, they met another old friend – a Lancaster bomber

TWENTY-FIVE years is a long time. As the train from London headed north towards Lincoln, Ross Elder, storeman at a cement works near Leighton Buzzard, thought : “I seem to know that fellow.”

Don Groscop, purchasing executive with a motor company, thought: “I know I’ve seen him before, but where was it?” On the tarmac at Waddington RAF Station, the two men came face to face again. And then they remembered.

Victor and Vulcan bombers tore down the runway with an ear-splitting crescendo of sound. When their heads were cleared of the noise they looked across to one of the airfield’s dispersal points and there, its four Merlin engines silent, they saw it – the Lancaster, the RAF’s most effective night bomber in World War II.

Though the Lancaster in Tuesday’s programme has never flown in anger, its letters, KM-B, are those of one of the most famous Lancasters that ever flew from Waddington on a bombing mission. Its pilot, Sq. Ldr. John Nettleton, won the Victoria Cross.

In the winter and spring of 1944 a Lancaster with the call sign O for Oboe brought Elder and Groscop closer together than either had been to another man in his young life – except the other five men in the aircraft.

While Groscop, working at his charts, provided the only light in the bomber’s darkened fuselage, Elder, in the mid-upper gun turret, scanned the sky for German night fighters.

Twenty-five years is a long time, and now many things have changed. Bomb-aimer Hogben only gave instructions to skipper Creed when the Lancaster was making its run in to the target. Now Hogben is boss of a firm which makes tinplate containers, and Creed is his works manager.

Horn services washing machines. Flight Engineer Stan Attwood tried civilian life. For seven years he worked in hospital management in Nottingham, but got fed up. In 1954 he rejoined the RAF and went to Singapore as stores corporal.

Rear-gunner Irlwyn Evans, now a police sergeant at Aberystwyth, stood by the rear turret of the grounded Lancaster at Waddington and looked at the turret through which he pointed his four Browning 303s.

The reunion had an acute moment of frustration when, with Waddington commanding officer Group Captain Arthur Griffiths at the controls, the Lancaster took off and made several low runs across the airfield.

Creed felt he could have done the job himself. And Hogben added: “And he could, too. And what’s more, if he did we’d all go with him.”

[Photograph]
The wartime Les Creed, ready for a mission . . . below, Heinsberg, and what a Lancaster could do

WHATEVER doubts one may or may not have about te ethics of the moon venture, it is essential to understand something about the technical side of the business.

I hope it has not escaped the notice of those who are as hopelessly unscientific as I am that two of the B.B.C.’s “Apollo Space” studio team, James Burke and Patrick Moore, have been allotted time off from their progress reports to answer children’s questions on how it all works.

How do the “different bits” that make up the Apollo 11 function? We were through that in no time with a model. Why is it chemically fired and not atomically? What will it push against in space? (Try [italics that [/italic] one). But best of all was “What will happen in the astronaut’s tears if they cry?” The answer is that the tears will float around the cabin. And if they cry a lot they will be swimming in tears. The seven-year-old girl who sent in the question must have sensed that Lewis Carroll was as much aware of the hazards of space travel as Jules Verne.

Both B.B.C. and I.TV. came up with some sticky emotional stuff in their moon commentating for the grown-ups. One I.TV. chap choked on “Man who is born and lived all his life on this earth . . . now . . .” Another I.TV. beauty was “The Americans are about to light a tremendous candle here this morning”. The B.B.C. countered later with “God’s in His Heaven and man is on his way there”. We also had “computers ticking like heart beats” and one of the astronauts “had already come a long way – from log cabin to space capsule”.

It might be said to have helped to put some human feeling into this terrifying affair. Heaven knows there is not much. Certainly not in John Mansfield’s brilliantly written and produced documentary, Out of This World (B.B.C.1), showing the career of Wernher von Braun, the man who designed the Saturn rockets and who is the brain behind past and future American space projects. He also designed the V-2’s that blasted savagely into London in 1944 killing or maiming nearly 10,000 people. We saw the notorious Peenemünde base, the rockets streaking across the Channel, von Braun and his team confidently surrendering to the Americans, and being quickly despatched to New Mexico to continue their research.

Now a respected and influential American citizen with some of his German colleagues still working with him, von Braun talked guttural fluency of nuclear rockets carrying men to Venus in the next 20 years.

NOSTALGIA for the kind of companionship that only seems generated in war-time by a communal danger has been worked almost to death in the last 25 years.

But Granada’s documentary If I Don’t Come Back – Have a Drink On Me managed successfully to resuscitate the emotion by tracking down the members of a bomber crew and taking them back to their old base in Lincolnshire. Middle-aged, balding, the seven men started off awkwardly, a forlorn group silhouetted against a bleak sky-line, until the only surviving Lancaster bomber came zooming down over their heads. They then remembered, with a growing despair for their lost youth and the inability to hold on to the feeling that once existed between them. I’m not sure how wise it is to stir all this up for the people concerned, but the experience was moving for the viewer.

The colour of Space

We shall have to put aside one day our consciousness of the war and the late enemy: perhaps we have already begun to do so. What came through Granada’s exercise in nostalgia, If I Don’t Come Back – Have a Drink on Me, was that a Lancaster bomber crew of the 1940s, tracked down in middle age, have no recollection of the lust of battle. What they feel now is awe and pity at the scale of the destruction in which they had to share, and respect for one another.

David Naden, the director, was so right to interview them separately, and then inter-cut. The years between weren’t able to intrude; they still knew one another as they were then. And we could see that all equally lived in the present.