19 items. The collection concerns Stanley Gordon Attwood (1924 - 1983) and includes photographs and newspaper cuttings that mainly relate to a documentary made in 1969 about a Lancaster aircrew of 50 Squadron reunited after 25 years.

The collection has been loaned to the IBCC Digital Archive for digitisation by Andrea Giles and catalogued by Barry Hunter.

Two cheques on a scrapbook page made payable to Stan Attwood 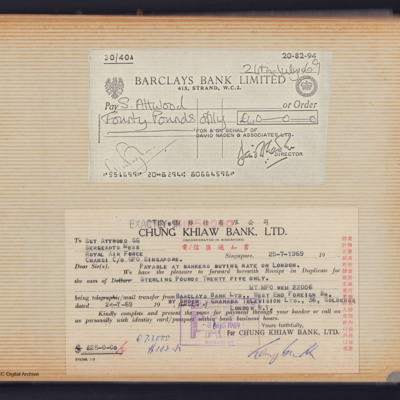 Two cheques paid to Stan Attword for his participation in the Granada Television documentary. The first, from David Naden and Associates is for £40 and the second from Granada Television Ltd is for £25. The £25 cheque is from the Chung Khiaw Bank… 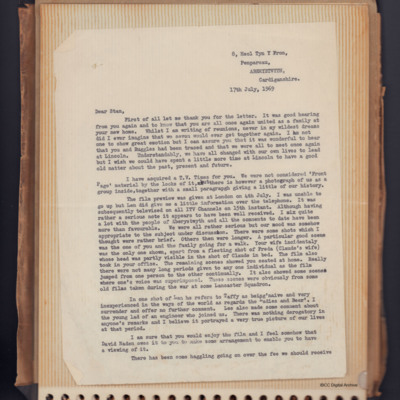 A letter written by Irlwyn (Taffy) Evans to Stan Attwood after the filming of the documentary. He discusses in detail the documentary after it was aired. Only the first page of the letter is present. 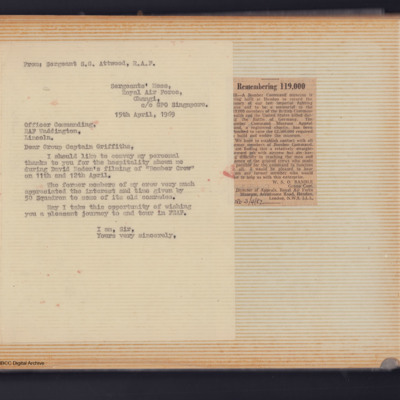 A copy of a letter thanking the Commanding Officer for their hospitality during the filming of the documentary 'Bomber Crew' on 11-12 April 1969. The letter is addressed from RAF Changai, Singapore.

On the same album page is a cutting referring… 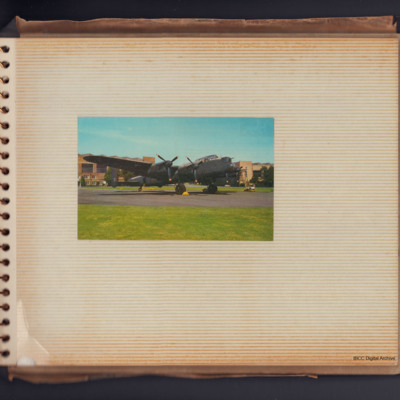 A side view of Lancaster, 'KM-B' on the ground. 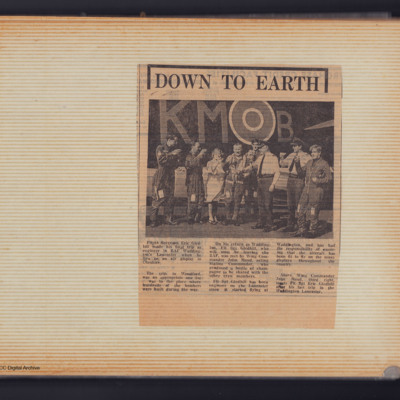 A newspaper cutting about the last flight of Flight Sergeant Eric Gledhill in Lancaster KM-B from RAF Waddington to a display at Woodford, Cheshire and back. In the photograph are seven airman and a woman. 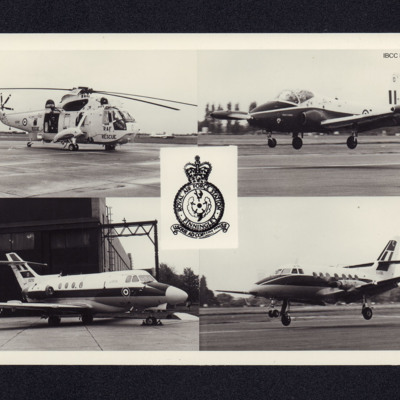 Four aircraft from RAF Finningley - a SeaKing, Jet Provost, Dominie and Jetstream. In the centre is a station crest. 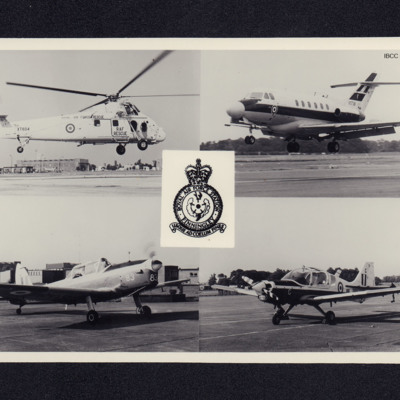 A postcard of four aircraft, a Wessex, Dominie, Chipmunk and Bulldog. In the centre is the crest of RAF Finningley. 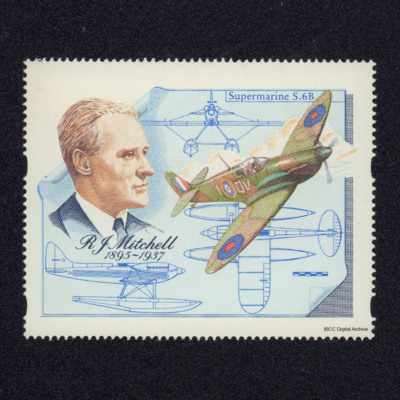 A stamp-label printed in 1995 to commemorate the centenary of the birth of R J Mitchell. It features a side profile of his head, a colour image of a Spitfire and, behind, a blueprint of a Supermarine S.6B. 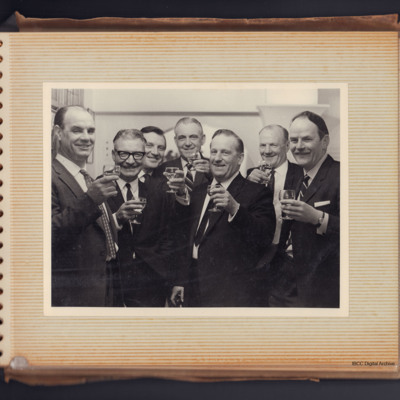 The seven aircrew from O for Oboe at their reunion after 25 years. They are dressed in suits and ties and standing with raised glasses.

Cutting 1 is a small photograph of a Lancaster and for of the crew with the time and day of the airing of the documentary.
Cutting 2 is an explanation of the idea of why the documentary was made and some detail about what inspired it.
Cutting 3 is… 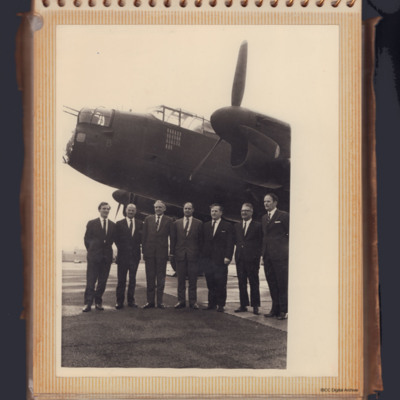 Seven retired airmen from O for Oboe, standing at the nose of a Lancaster.

Civilian at the controls of a Lancaster

A civilian in the pilot's seat of a Lancaster. 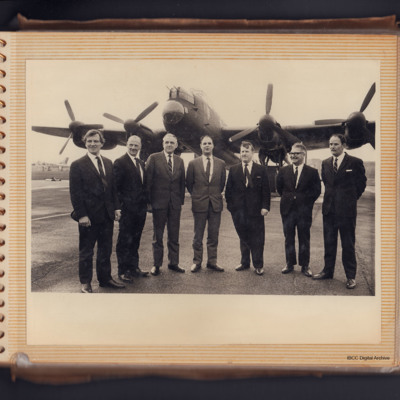 Two photographs of the crew of O for Oboe reunited and standing in front of a Lancaster. A Vulcan can be seen in the background. 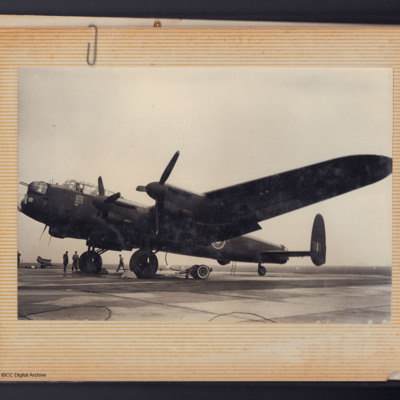 A side view of a Lancaster under service. Nose art indicates 33 operations. Four men are visible on the ground. 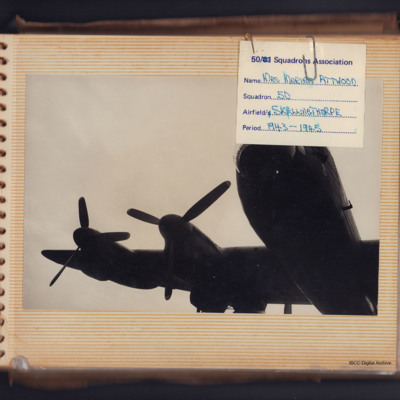 An image of a Lancaster looking up at the nose and starboard wing. Attached is a small card '50 Squadrons Association Mrs Marian Attwood 50 Skellingthorpe 1943-1945'. 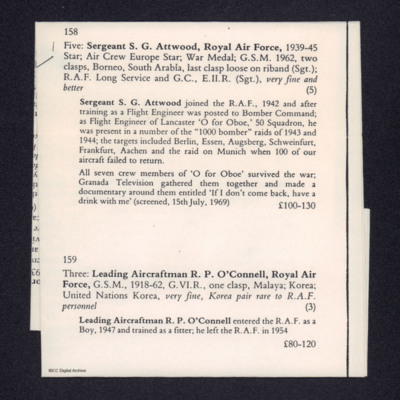 A list of Stan Attwood's medals from a sale catalogue. It also includes a short description of his service life and refers to the documentary 'If I don't come back, have a drink with me'. 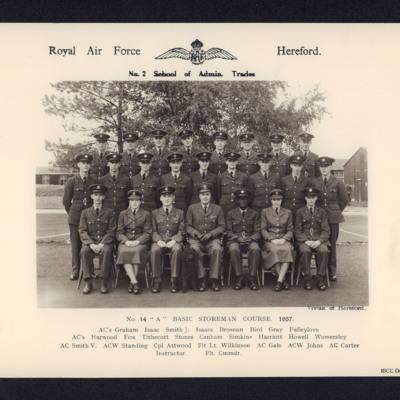 A group of 22 airmen and two airwomen, arranged in three rows. The header reads 'Royal Air Force' Hereford No.2 School of Admin. Trades' and the footer 'No 14 "A" Basic Storeman Course 1957.'

Surnames given below. Cpl Attwood is front row, third… 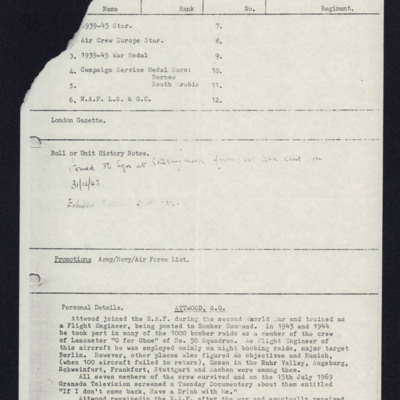 An extract with personal details about Stan Attwood. It contains a list of his medals and a brief description of his service life.

If I don't come back 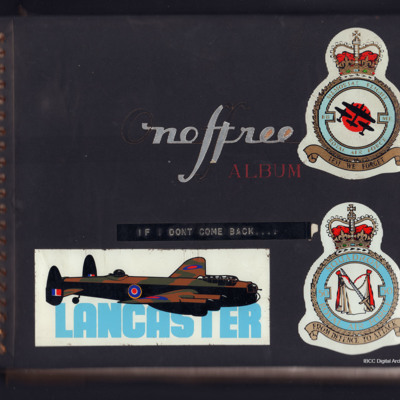 Scrap book cover with dymo label 'IF I DONT COME BACK....' with an image of a Lancaster, a Memorial Flight crest and a 50 Squadron Crest.
View all 19 items