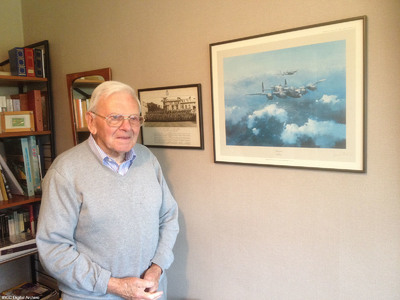 James Swaffield was born and grew up in West London and flew as a navigator in the RAF. He discusses with the interviewer his life before, during and after the war. Highlights include: remembering his father, who served during the First World War and was awarded a Military Cross; his cousin Don flew ninety ops as a navigator and was awarded a DFC and bar; he joined the RAF at seventeen; started his training on the 14th of September 1942 at 7 AOS at RAF Bishops Court, in Northern Ireland, where he spent fifteen months; in July 1944 was posted to 106 Squadron, where his first operation was to Kiel; was posted to 44 Squadron; discusses the briefing before operations; left the RAF in 1947 and went to work in the catering industry, before running the RAF Club from 1976 to 1991.