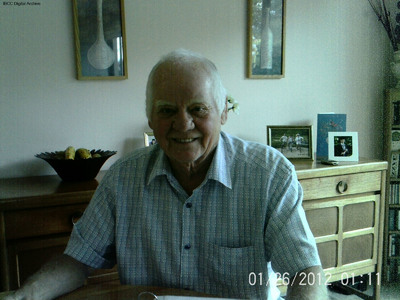 Peter Steward worked at Woolwich Arsenal factory but volunteered for the Air Force when he was seventeen. He trained and served as a radio and radar engineer and served post war in Germany the Middle East and Australia.

SB: This is Sheila Bibb interviewing Peter Steward on the 14th of August 2015 at his home in Erith. Peter, could we start off with you just telling me a little bit about yourself, your family, background detail?
PS: I was, I was born in 1933 and my father at the time was a milkman, er, working from, from Belvedere village, called Home County Dairies. When I was — my earliest memories are of Woolwich Road in Erith which was a two up two down terraced house, um, and they’re very vague apart from instances where father built Meccano models etcetera. My father was always an unskilled man insomuch as that he never had a trade and worked mostly as a labourer or a fitter’s mate. He was called up during the war and, um, after a spell of training and — also at RAF Calshot on flying boats and Catalinas — he was posted to India so I didn’t see him again until 1946. He never rose above the rank of LAC but his brother was a sergeant in the Air Force from 1933 and my cousin also was in the RAF from 1933, um, cousin Vic [clears throat] was an aircraft fitter, mostly on Lysanders, my, er, cousin Owen was a radio operator air gunner on 75 Squadron, which was 75 New Zealand Squadron, and he was stationed at Feltwell, flew thirty missions and was killed on his last one. He married six months, rather tragic. [background noise] Having two other uncles in the Air Force, um, I left school at fifteen and I went to work at Woolwich Arsenal in a factory making German tank spares but I didn’t like it very much and with a fellow worker, Bob Rowe [?] we were, went up to London, saw the posters in the RAF building in Kingsway and decided to join the boys service, which we both did. From there we went to, er, for training to Compton Basset to train as telegraphists, which was like for us at seventeen was like torture [laugh]. It was wooden huts, coke fires, um, lots of bull [?] and school of course on top of this so, um, for eighteen months it was heavy going but looking back on it, it was quite fun as well. From there, I was posted to Comms Central, which was Telecommunications Central at Stanbridge and we actually lived in Bletchley. I was there almost two years and a posting came up for Germany. Well, first of all I had to report to High Wycombe which was Headquarters Bomber Command and there we formed a convoy of, um, Gee and Oboe equipment to take to Germany so we went by convoy. I can remember going from Dover to Dunkirk, er, where the French wanted to have a look in the radio vehicles but of course they were sealed and, um, so there was a bit of kerfuffle but anyway they didn’t get their way and we pressed on to RAF Wildenrath in Germany, where we set up the headquarters. After we’d been there about six months they had a small monitor unit. This consisted of a RVT, a radio vehicle, with monitoring equipment and we would chase about over Europe, checking the main Gee chain, the central European Gee chain, which was also H, um, HS, H2S for the blind bombing and so, for the next two years, that’s what I did, chase around Germany between Winterberg, Osnabruck, Neustadt, um, Weinstrasse [?], Spijkerboor in Holland. These were all radar units on this Gee chain and all to do with Bomber Command but the closest I ever got to aircraft was at Wildenrath which was a fighter station anyway but we did see, I had a couple of Canberras land there once and that was the closest I got to aircraft from Bomber Command [laugh]. Anyway, after two years I came back to the UK and then I was with different commanders. So, that was my total experience of Bomber Command really.