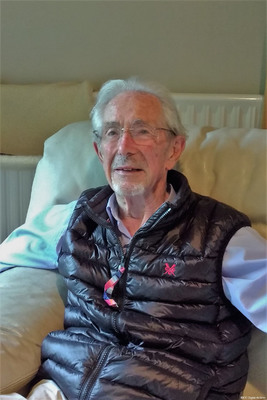 Norman Shakesby was a radar mechanic on 405 and 582 Squadrons. Born in 1924, he was studying languages at The City School in Lincoln at the outbreak of the Second World War. His language teachers were quickly called up to act as interpreters, so on the advice of the headmaster, Norman left school and found employment as a junior bank clerk. He became a member of the Air Training Corps when it was formed, which paved the way for him to enlist in the RAF in November 1942. Having completed his basic training, Norman attended the Leeds College of Technology studying radio, from where he was selected to specialise in radar. Further training followed and he became proficient on both H2S and Gee radar. Posted onto 405 Canadian Squadron, Norman maintained the equipment on the aircraft. This also involved boarding aircraft before take-off to set the selected frequency for that operation. Care had to be taken with impatient crews, to ensure he wasn’t a reluctant passenger on operations. He had the greatest respect for the aircrew and witnessed the euphoria of them completing operations before going through the same emotions again a few days later. In 1944, a posting to 582 Squadron gave Norman a change, servicing equipment in a bay carrying out more detailed rectification. Following the ending of the war, a posting to the Middle East saw him complete his military service before returning to RAF Waddington and demobilisation. After meeting his old headmaster, he followed a career in teaching, initially employed as a primary school teacher at Riseley, Bedfordshire, before completing his degree and becoming involved in further education.

IP: Well, we’ve been going for nearly an hour and a half-
NS: I know.
IP: -Norman, so I think, I think to save your strength we’ll call it- I’d just like to say, it’s fascinating listening to you, I mean I'm sure we could talk for hours more, but, but I think we’ll call a stop there, it’s been great. Thank you ever so much, I do appreciate it.
NS: Well, I’ve enjoyed it, it’s nice to talk about yourself.
IP: Exactly, exactly.
NS: You see, it’s the drama, dramatic in me [chuckles].