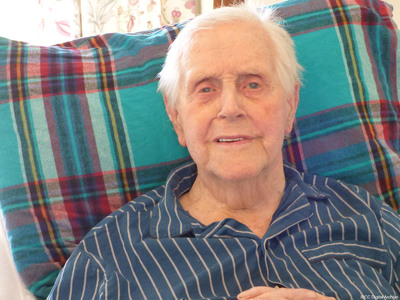 Sydney James Richards was born in Greenwich, London and was working in a drawing office in the Arsenal before joining the Royal Air Force. He was originally intending to join the Navy but changed his mind as he decided he preferred aircrew. He did his training near Nottingham as a Wireless Operator Rear Gunner and was stationed at RAF Fiskerton. He became a Warrant Officer and flew twenty operations before having to bail out over the suburbs of Berlin on his twentieth. He was captured with the pilot of his crew, Bob Petty, and became a Prisoner of War. Two of his crew were killed on an earlier operation when their aircraft was hit by anti-aircraft fire whilst flying over the Ruhr. He was liberated by the Russians and he walked out of the camp with his friend and they walked until the found Americans who helped them get back to England. When he left the Royal Air Force he went back to his previous employment and subsequently became an Insurance agent which he continued to do for the rest of his working life.