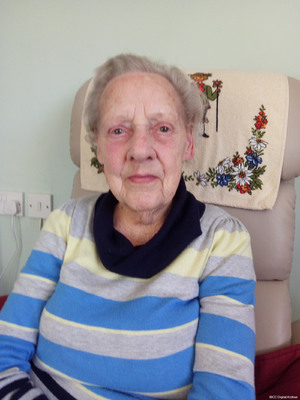 Dorothy’s was born in Cleethorpes, her father served in the Army during the First World War. They moved to Grimsby at the outbreak of the war, when she was turning 13 years old. She recalls the bombings and having to stay in an Anderson air raid shelter in her garden throughout the night. Her father decided to move the family to Leicester believing it to be safer. There were communal air raid shelters, but they were closed after six time-fused bombs dropped nearby. The family took cover under the stairs of their home. At 14, Dorothy had left school secured her first job, but the family moved back to Grimsby due to the severity of the bombings. Dorothy went on to secure a tailoring apprenticeship as she was able to use a Treadle sewing machine, having originally learnt the craft from her grandmother. She undertook several tailoring jobs during the war, usually sewing uniforms for officers, which was considered ‘war work’. Dorothy recalls the ongoing bombings on Grimsby, including when docks and railway lines were targeted. She also remembers rationing, including clothing coupons, and having to save ingredients throughout the year to make cakes for special occasions. Dorothy enjoyed dancing, often at her local church hall on Saturday nights, where she won a competition and met her future husband, Eric. After the war, he served in the Corps of Royal Electrical and Mechanical Engineers for two years’ National Service.