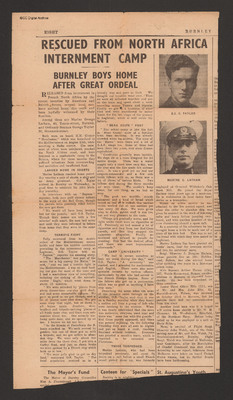 Account of release of two Burnely men (Ordinay Seaman G Taylor and Marine C Latham) amongst French North Africa nternees freed by American Forces. Both had been aboard HMS Manchester which was torpedoed in Mediterranean on August 13th. Tells of battle on convoy, incarceration in "Beau Geste" fort and conditions. Notes others released including Sergeant Observer J Douglas Hudson arrived home.