20 pages. The scrap book contains items about Roy Maddock-Lyon's aircraft being shot down over Holbæk in Denmark 14 February 1945 and his subsequent evasion. It contains correspondence, photographs of the wreckage of his aircraft ZA-X, and what happened to his crew. 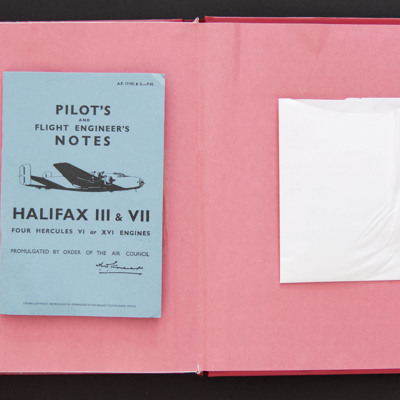 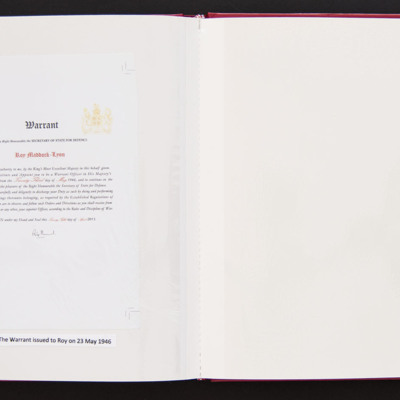 Promotion of Roy to Warrant Officer 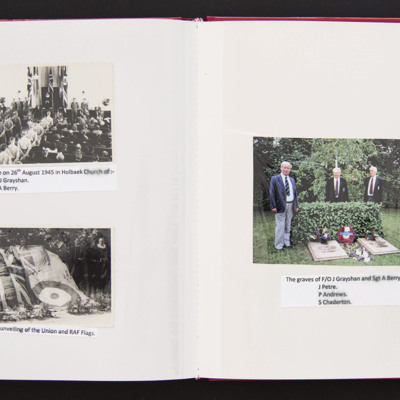 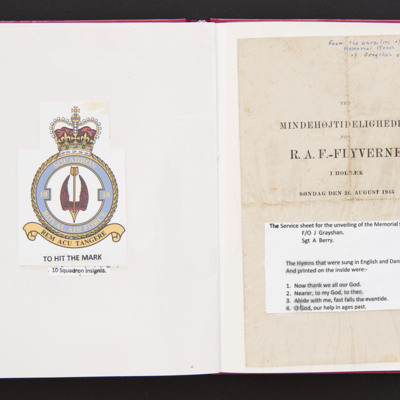 Item 1 is a colour crest of 10 Squadron, captioned '10 Squadron Insignia'.
Item 2 is an order of service to mark the unveiling of the Memorial Stones for Flying Officer John Grayshan and Sergeant Alber Berry. 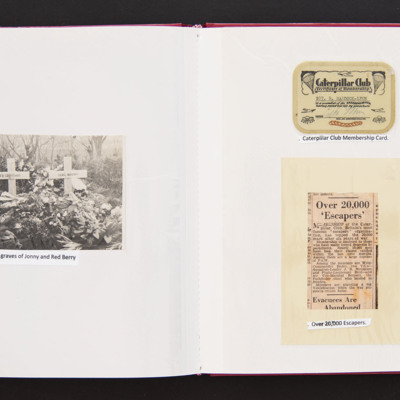 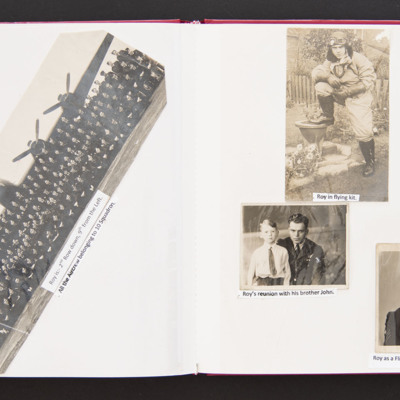 Photograph 1 is of 10 Squadron aircrew in five rows in front of a Halifax. It is captioned 'Roy is:- 2nd row down, 9th from left.' and all the Aircrew belonging to 10 Squadron'.
Photograph 2 is Roy Maddock-Lyon in a Sidcot suit, flying helmet and… 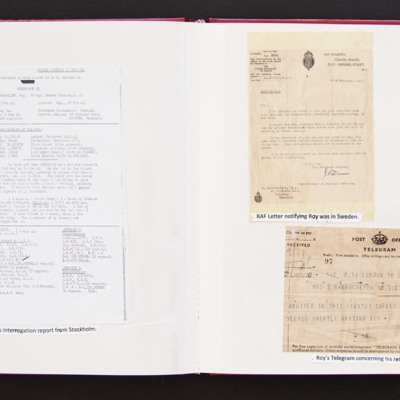 Item 1 is a statement by Roy Maddock-Lyon on the events leading to the loss of the aircraft and his evasion and return to the UK.
Item 2 is a letter from the Air Ministry advising his parents that he is safe in Sweden. It is captioned 'RAF Letter…

Report on crash of aircraft of 10 Squadron in Denmark on the night of 14th/15th February 1945, and subsequent escape of certain members of the crew to Sweden 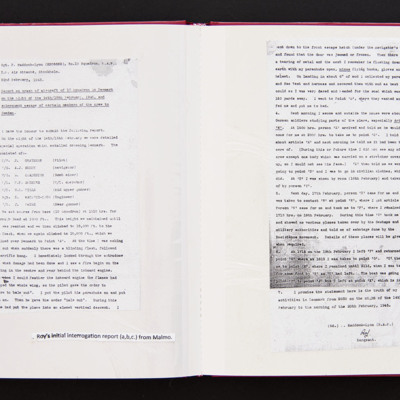 A detailed report on the flight over Denmark, the explosion on the aircraft and evacuating the damaged aeroplane. The subsequent evasion to Sweden is also described. 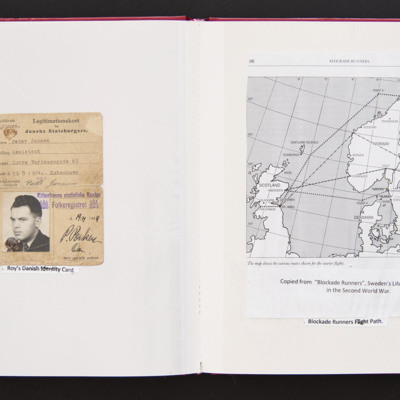 Item 1 is a Danish Identity card issued to Roy Maddock-Lyon under the name Peter Jensen. It includes a head and shoulders photograph.
Item 2 is a sketch map of Scandanavia and Great Britain with four routes described as 'Blockade Runners'. Captioned… 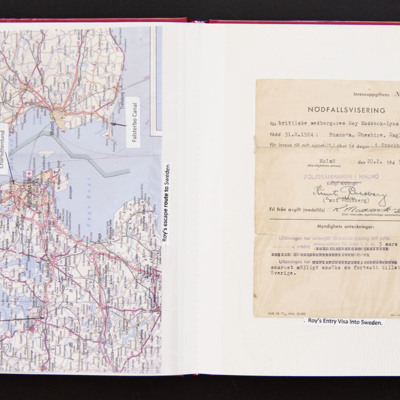 Item 1 - A map of Eastern Denmark annotated with the site of the crash, Charluttenlund and Falsterbo Canal.
Item 2 is a ticket from Malmo to Stockhol issued to Roy Maddock-Lyon. 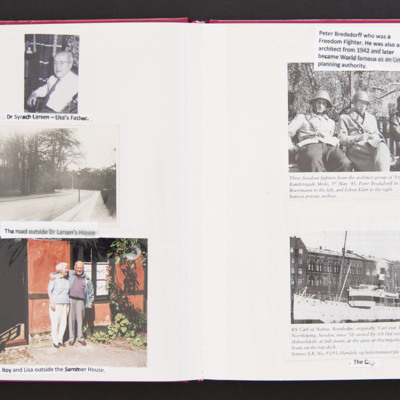 Photograph 1 is a half length portrait of a man wearing shirt and tie, seated in a chair, captioned ' Dr Syrach Larsen - Lisa's Father'.
Photograph 2 is a street scene with a curved road, lamp posts and trees, captioned 'The road outside Dr Larsen's…

Johannes Helms and family, his house and Tollosse Railway Station 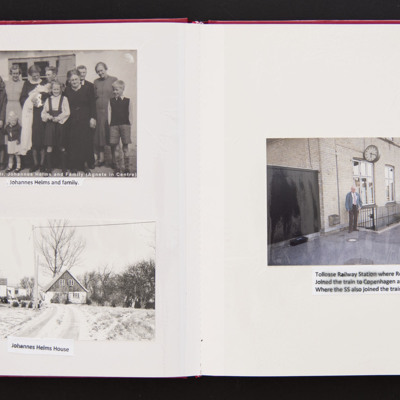 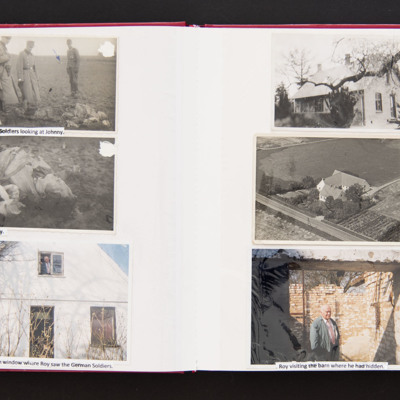 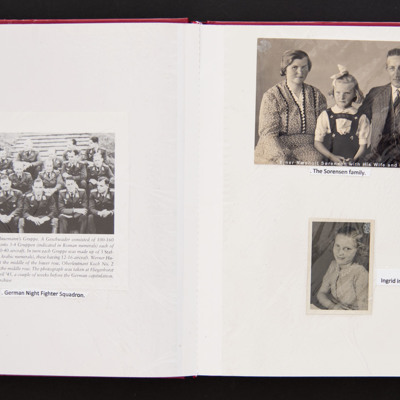 Photograph 1 is 15 German airmen seated on a flight of steps. The main caption details how the Gruppe was sub-divided and a later caption reads 'German Night Fighter Squadron'.
Photograph 2 is a half length portrait of a man, woman and young girl,… 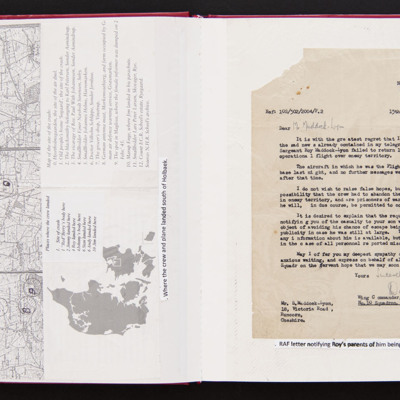 Item 1 is a map of Holbaek with the crash site and the location of two bodies and five survivors. It is captioned 'Where the crew and plane landed south of Holbaek.'
Item 2 is a letter to Roy Maddock-Lyon's father confirming that his son is missing.… 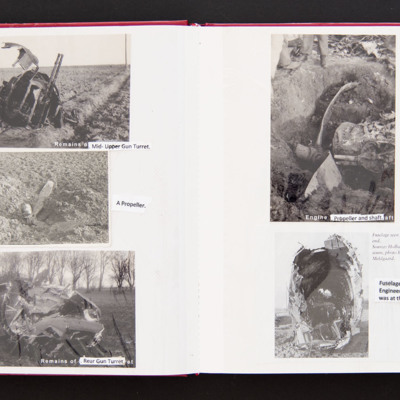 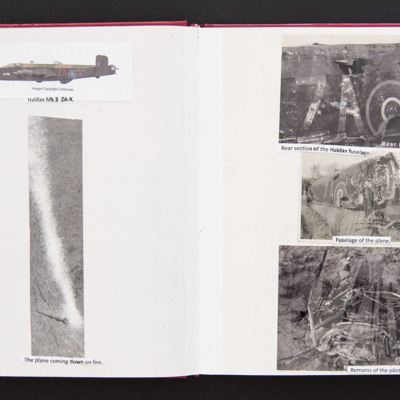 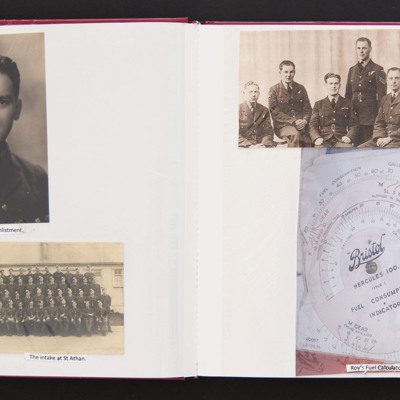 Photograph 1 is a head and shoulders portrait of Roy Maddock-Lyon in his training side cap and uniform, captioned ' Roy at his Enlistment'.
Photograph 2 is a group of trainee airmen arranged in four rows in front of a building, captioned ' The…

Grade Card and Approval to enlist in RAFVR 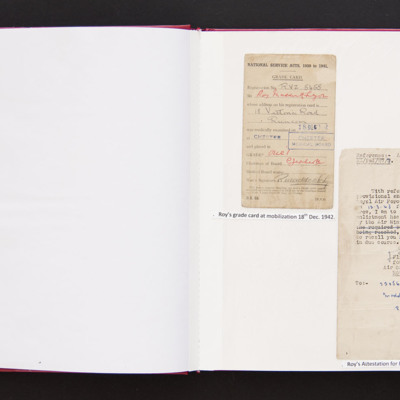 Item 1 is a grade card issued to Roy Maddock-Lyon after his medical examination in Chester, 18 December 1942
Item 2 is a letter enlisting Roy Maddock-Lyon into the RAFVR, dated 29th June 1943.

Wartime Memories of the RAF 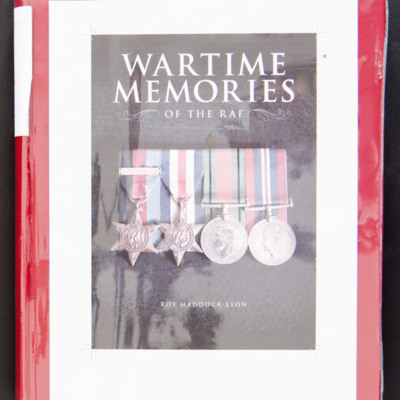