The collection has been loaned to the IBCC Digital Archive for digitisation by Hugh Parry and catalogued by Stuart Bennett. 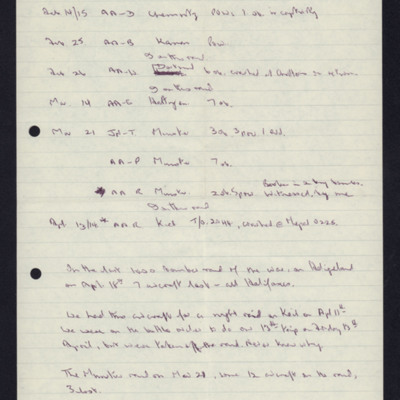 List of operations between 11 February 1945 and VE day while Hugh Parry was serving with 75 New Zealand Squadron at RAF Mepal, Cambridgeshire. Operations are listed in chronological order with aircraft identification and losses. 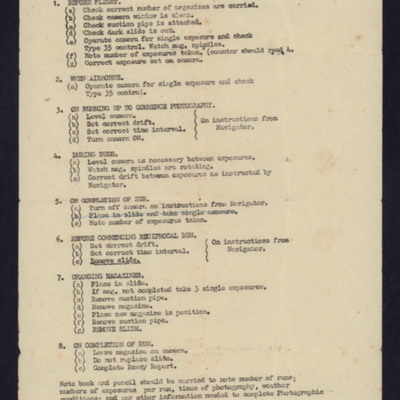 A camera operator checklist of pre, during and post flight instructions.

Operation to Kamen and Linz 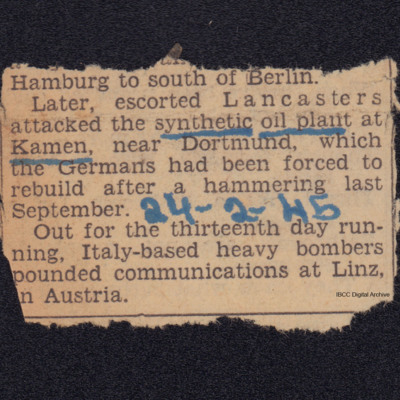 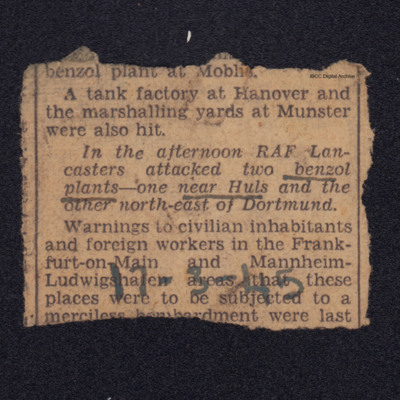 Bombing a tank factory at Hanover. Marshalling yards at Munster. Benzol plants near Huls and Dortmund. Warning to civilians and foreign workers at Frankfurt-on-Main and Mannheim-Ludwigshafen. Captioned '17.3.45'.

Operation to the Ruhr 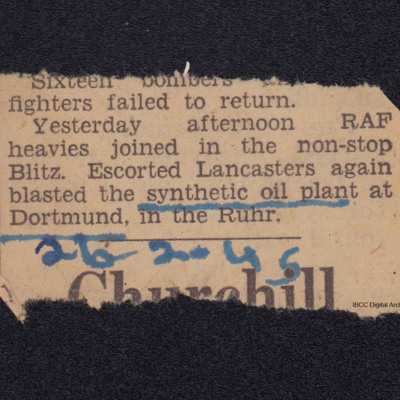 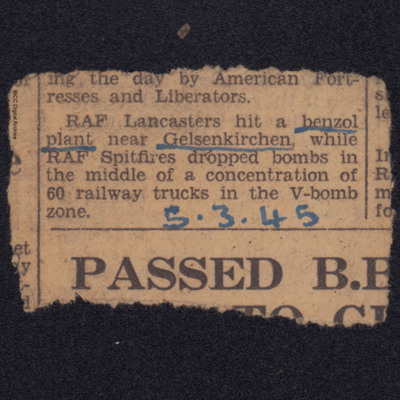 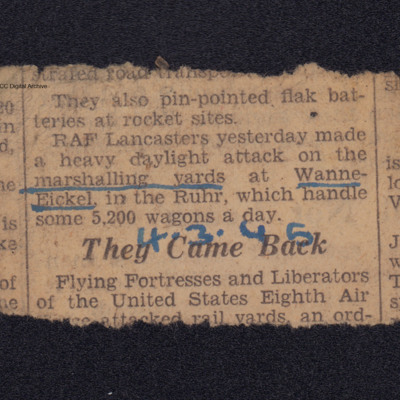 Operation to the Rhine 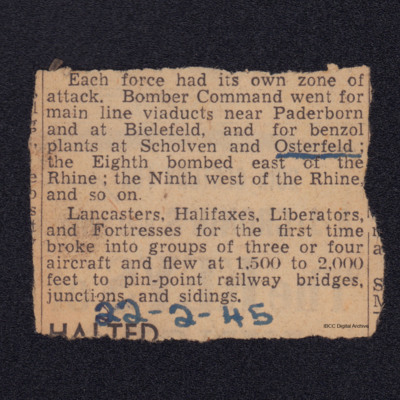 Account of bombing targets near Paderborn and Bielefeld, benzol plants at Scholven and Osterfeld. Osterfeld is underlined. Pinpoint attack on targets. Captioned '22-2-45'.

Operations to the Ruhr 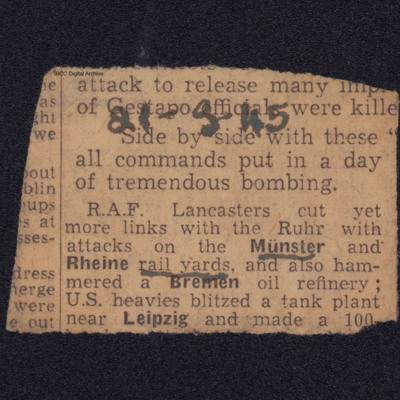 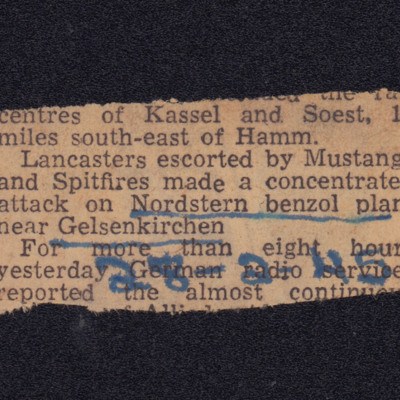 Account of Lancaster attack on the Nordstern benzol plant Gelsenkirchen escorted by Spitfires and Mustangs. Captioned '28.2.45'. 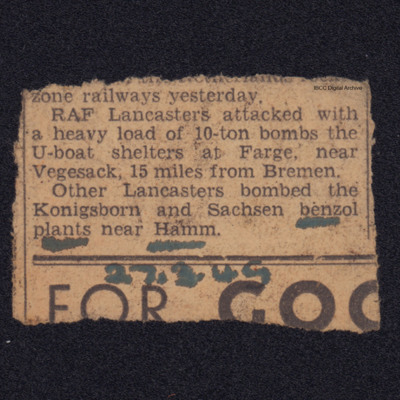 Account of 10 ton bomb attack on U-boat shelters at Farge and another attack on Konigsborn and Sachsen benzol plants. Benzol plants and Hamm is underlined. Captioned '27.3.45'. 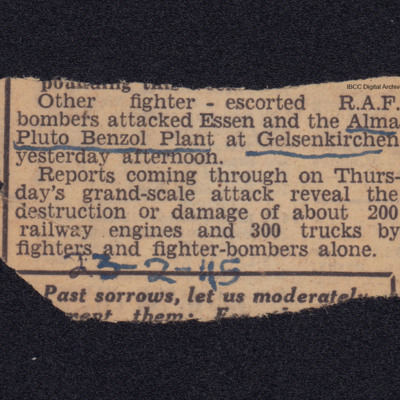 Operation to Mannheim and Kamen 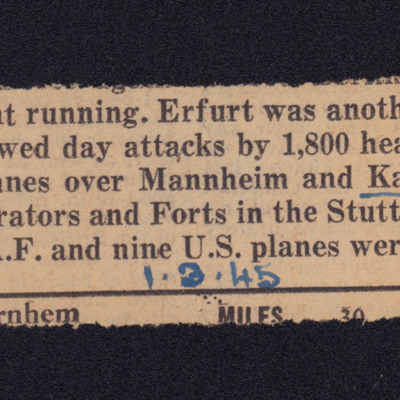 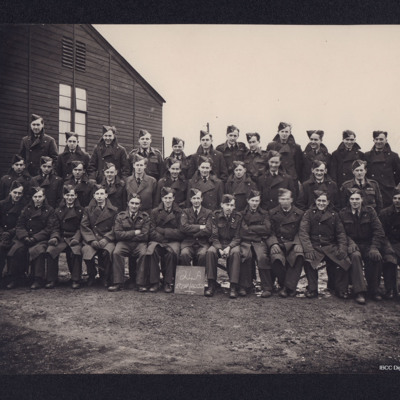 36 airman in three rows. All have forage caps on and most are wearing Greatcoats. In the centre of the front row on the ground is a blackboard with '24A EQUIP/ACCTS' on it. In the background to the left of the photograph is the end of a wooden… 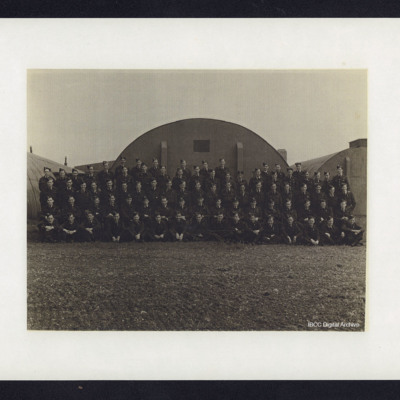 Formal group portrait of airman in front of a Nissen hut. Front row is seated crossed legged, the second row on seats, the third row is standing and next two rows are tiered above. Most are wearing forage caps. In the centre of the seated row are a… 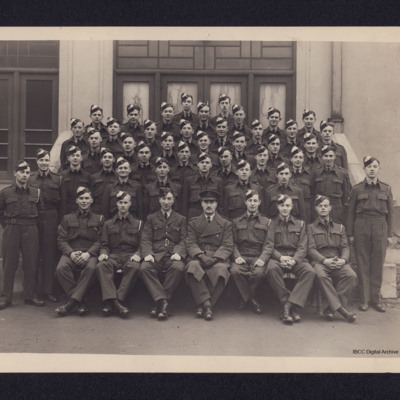 Group of airman cadets in a formal pose standing outside on ascending steps into a building. Most have training flashes on their forage caps. The front row is seated with an officer in the centre and a corporal to his right. On the reverse are 43… 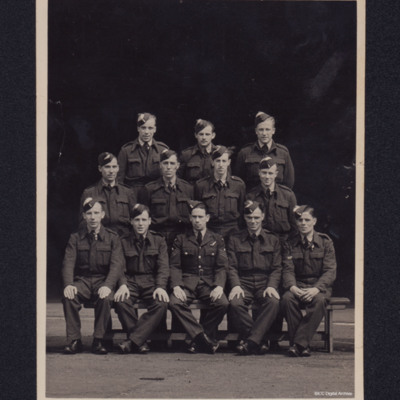 12 airman in a formal pose in three tiers with the front row seated. All are in uniform and are wearing forage caps. Seated on the front row in the middle is a flight sergeant displaying a single wing brevet. Four of the airmen have a whistle… Hugh Parry was born in Oswestry and joined the Air Force in April 1943 and volunteered to be an air gunner. Knowing that there was a height restriction on air gunners of six feet he hid his height by wearing baggy trousers. After training, he was…
View all 20 items