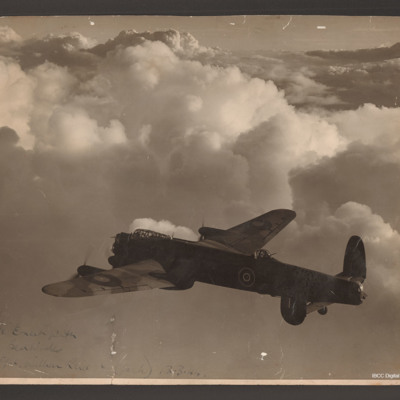 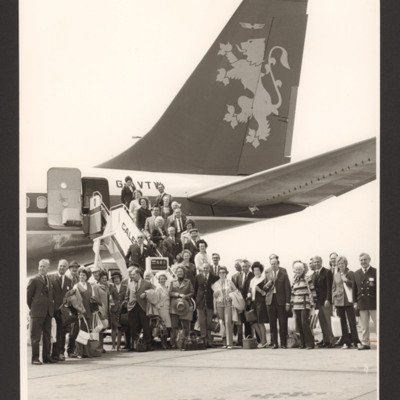 A group of veterans and their wives grouped around the boarding steps at the rear of a British Caledonian Boeing 707. Some of the group are on the boarding steps. They are going to a 617 squadron reunion in Canada. 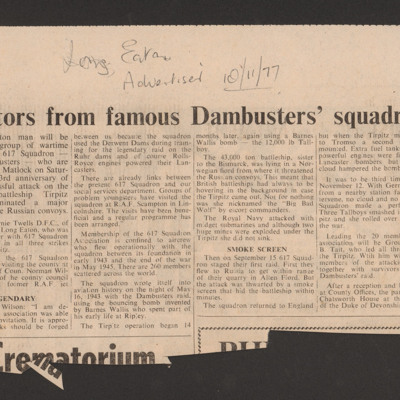 A newspaper cutting announcing that Ernie Twells and the 617 squadron association will attend a presentation at Matlock. It describes the attempts made to sink the Tirpitz. Handwritten at the top is 'Long Eaton Advertiser 10/11/77'. 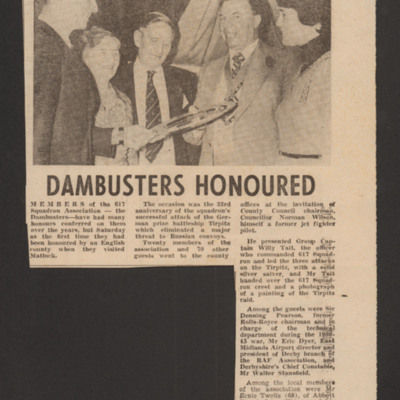 A newspaper cutting with a photograph of Group Captain Tait, Mrs Twells, Mr Twells, Councillor Wilson and Mrs Wilson. The 617 Squadron Association were presented with a silver salver by Derbyshire County Council. 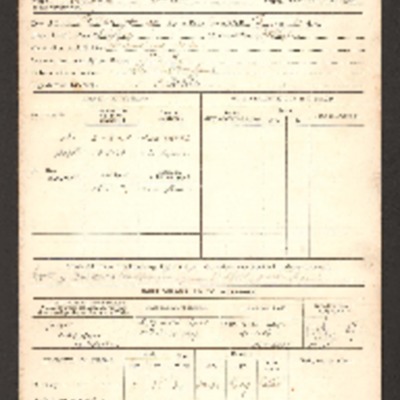 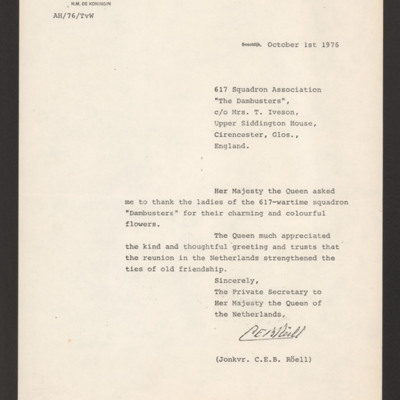 A list of 48 operations undertaken by Ernie Twells. It details date, target and flight time. 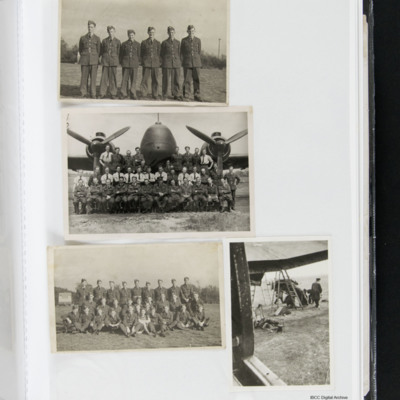 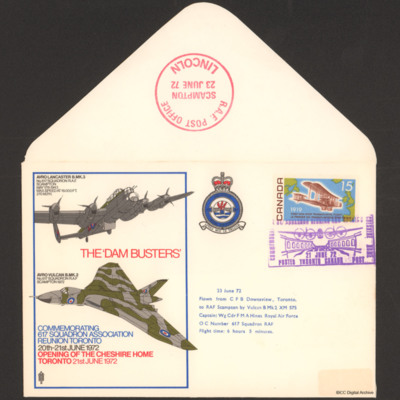 An envelope with a 15c Canadian stamp commemorating the first non-stop transatlantic flight. There is a 617 squadron badge and on the left a Lancaster. Underneath is a Vulcan and under that 'Commemorating 617 Squadron Association Reunion Toronto… 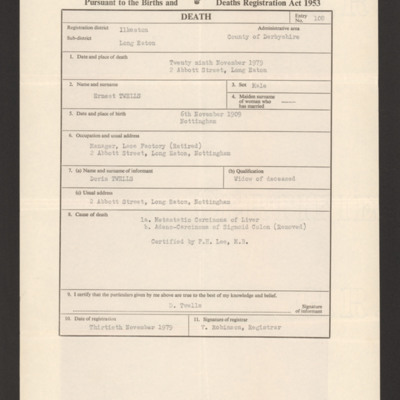 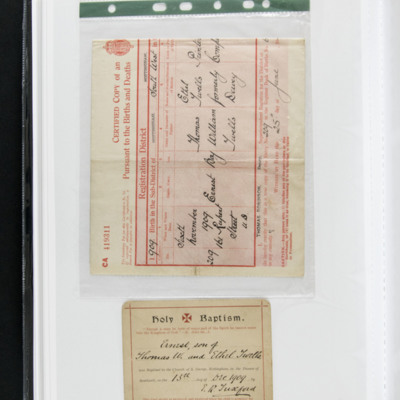 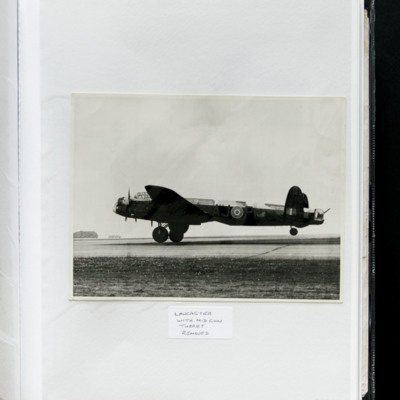 A port side view of Lancaster AJ-P from the film of the Dam Busters. Its tail is up and is either landing or taking off. 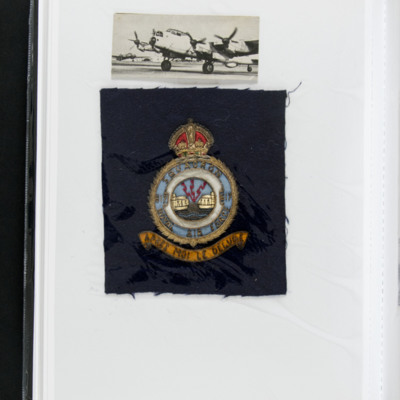 Lancaster, side/ front view. It is painted white. Behind is a twin engined aircraft. On the reverse 'Avro 683 "Lancaster " MR-3 RF273 last to leave Malta winter 1953'. 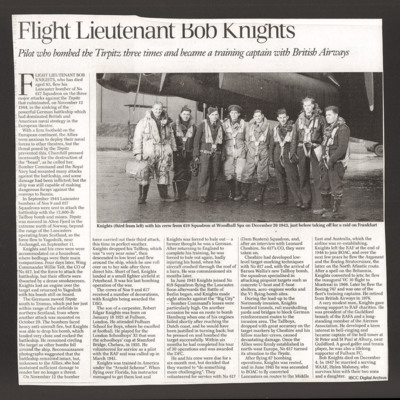 Veterans on way to reunion 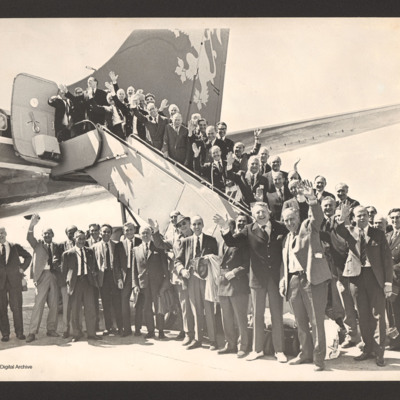 A group of nearly 50 veterans on the boarding steps of a British Caledonian Boeing 707. They are posed for the photograph and are all waving. Captioned 'Reunion trip to Canada Early 1970's'. 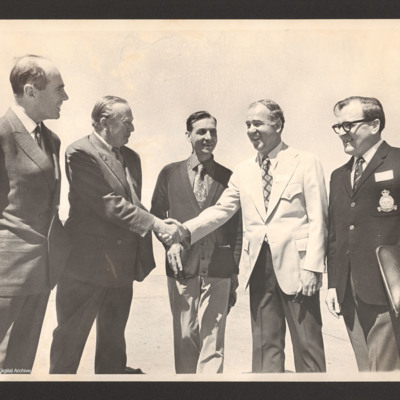 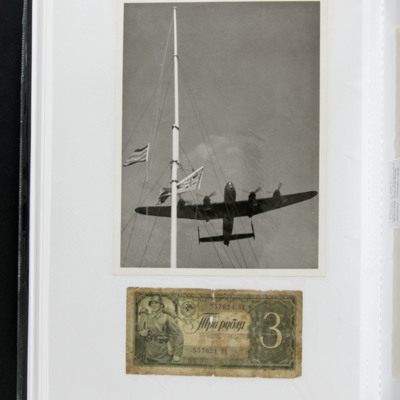 A Lancaster flying over a flagpole with the RAF Ensign and an unidentified second flag. 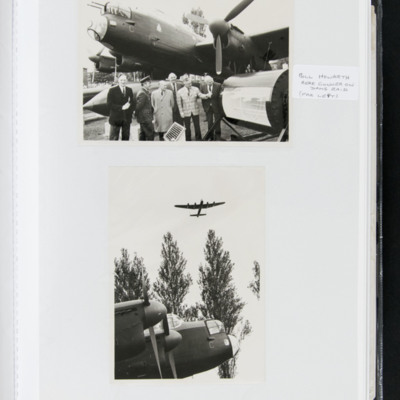 Five veterans standing beside a bouncing bomb exhibit. Behind is the front of a Lancaster 'C'. Captioned 'Bill Howarth rear gunner on Dams raid (far left)'.

A Lancaster flying over the nose of another Lancaster 'C'.

Ernie Twells at a social occasion 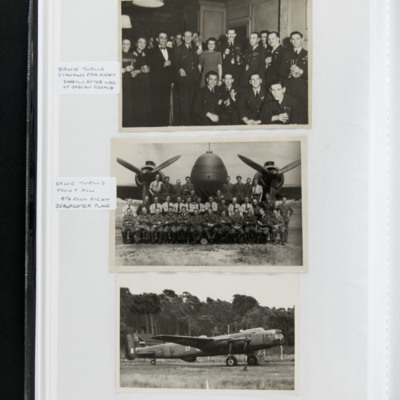 A group picture of airmen and women. Several have drinks in their hands and one airman is smoking. Captioned 'Ernie Twells standing far right shortly after loss of baby Gerald'.

A group of airmen arranged in three rows in front of a Beaufighter.…

Ernie Twells' Obituary and letter from the King 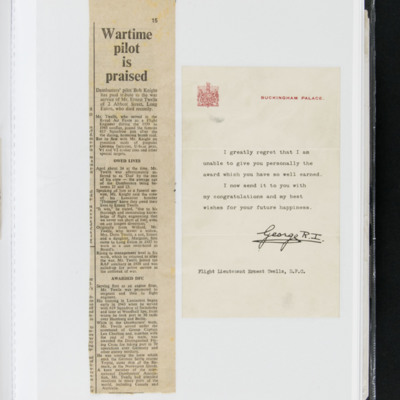 Ernie Twells' obituary detailing his life before, during and after the war.

A letter from the King awarding Ernie Twells his Distinguished Flying Cross.

A Lincoln and a Varsity 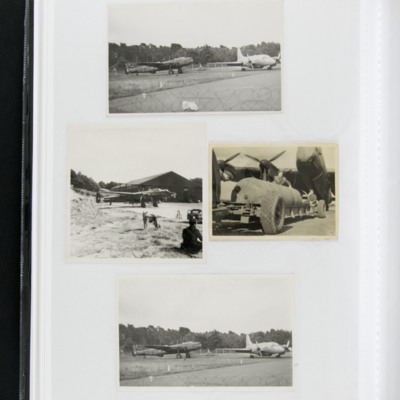 A Lincoln and a Varsity taken from the starboard side, looking across a barbed wire fence.

A Lincoln with an experimental nose. In the foreground a man is sitting with his back to the camera, on his left is an Alsatian dog. Behind him is a VW… 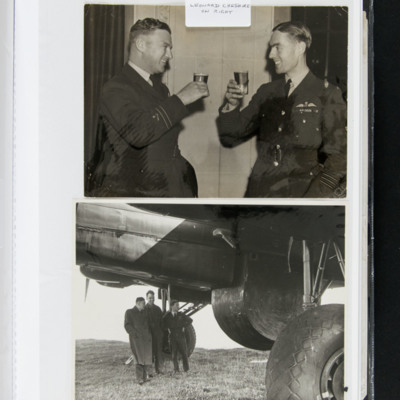 A three quarters portrait of Leonard Cheshire and another officer. They have raised glasses of beer and are smiling.

A civilian and two airmen under a Lancaster with a mocked up bouncing bomb during the filming of The Dam Busters. Standing with… 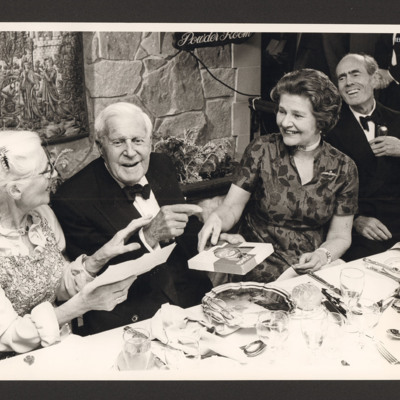 Doris and Ernie Twells with the leader of Derbyshire County Council 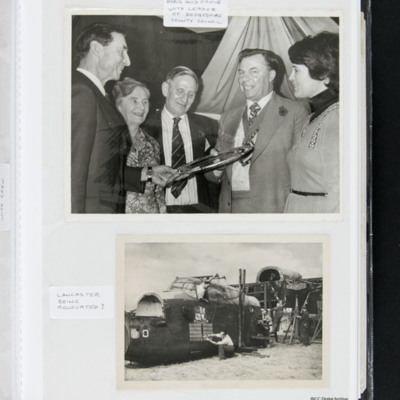 The nose and main spar of Lancaster EE134. Six men are working on it.… 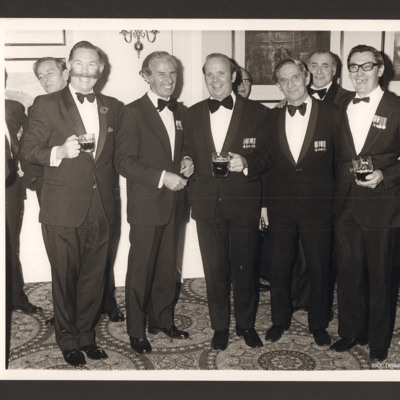 A group of veterans in suits. They are wearing their campaign medals and smiling. Three are holding beer mugs. They are standing on an ornate carpet and on the wall behind are framed paintings. Captioned 'Ernie Twells 2nd from right with crew'.
View all 46 items