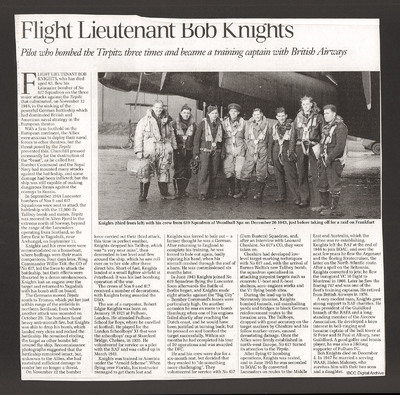 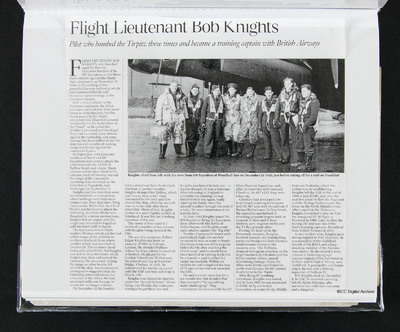 A newspaper cutting from a scrapbook.

Knights (third from left) with his crew from 619 Squadron at Woodhall Spa on December 20 1943, just before taking off for a raid on Frankfurt

FLIGHT LIEUTENANT BOB KNIGHTS, who has died aged 83, flew his Lancaster bomber of No 617 Squadron on the three major attacks against the [italic] Tirpitz [/italic] that culminated, on November 12 1944, in the sinking of the powerful German battleship which had dominated British and American naval strategy in the European theatre.
With a firm foothold on the European continent, the Allies were anxious to deploy their naval forces to other theatres, but the threat posed by the [italic] Tirpitz [/italic] prevented this. Churchill pressed incessantly for the destruction of the “beast”, as he called her. Bomber Command and the Royal Navy had mounted many attacks against the battleship, and some damage had been inflicted; but the ship was still capable of making dangerous forays against the convoys to Russia.
In September 1944 Lancaster bombers of Nos 9 and 617 Squadrons were sent to attack the battleship with the 12,000-lb Tallboy bomb and mines. [italic] Tirpitz [/italic] was moored in Alten Fjord in the extreme north of Norway, beyond the range of the Lancasters operating from Scotland, so the force flew to Yagodnik, near Archangel, on September 11.
Knights and his crew were were [sic] accommodated on a houseboat, where bedbugs were their main companions. Four days later, Wing Commander Willie Tait, the CO of No 617, led the force to attack the battleship, but their efforts were thwarted by a dense smokescreen. Knights lost an engine over the target and returned to Yagodnik with his bomb still on board.
The Germans moved [italic] Tirpitz [/italic] south to Tromso, which put her just within range of the airfields in northern Scotland, from where another attack was mounted on October 29. The bombers faced heavy anti-aircraft fire, but Knights was able to drop his bomb, which landed very close and rocked the battleship. He remained circling the target as other bombs fell around the ship. Reconnaissance photographs suggested that the battleship remained intact, but, unknown to the Allies, she had sustained sufficient damage to render her no longer a threat.
On November 12 the bomber force carried out their third attack, this time in perfect weather.
Knights dropped his Tallboy, which was “a very near miss”, then descended to low level and flew around the ship, which he saw roll over on to her side after three direct hits. Short of fuel, Knights landed at a small fighter airfield at Peterhead. It was his last bombing operation of the war.
The crews of Nos 9 and 617 received a number of decorations, with Knights being awarded the DSO.
The son of a carpenter, Robert Edgar Knights was born on January 18 1921 at Fulham, London. He attended Fulham School for Boys, where he excelled at football. He played for the London Schoolboys’ XI that won the Schoolboys’ cup at Stamford Bridge, Chelsea, in 1935. He volunteered for service as a pilot with the RAF and was called up in March 1941.
Knights was trained in America under the “Arnold Scheme”. When flying over Florida, his instructor managed to get them lost and Knights was forced to bale out – a farmer thought he was a German.
After returning to England to complete his training, he was forced to bale out again, badly injuring his hand, when his aircraft crashed through the roof of a barn. He was commissioned six months later.
In June 1943 Knights joined No 619 Squadron flying the Lancaster. Soon afterwards the Battle of Berlin began, and Knights made eight attacks against the “Big City” – Bomber Command’s losses were particularly high. On another occasion he was en route to bomb Hamburg when one of his engines failed shortly after reaching the Dutch coast, and he would have been justified in turning back; but he pressed on and bombed the target successfully. Within six months he had completed his tour of 30 operations and was awarded the DFC.
He and his crew were due for a six-month rest, but decided that they wanted to “do something more challenging”. They volunteered for service with No 617 (Dam Busters) Squadron, and, after an interview with Leonard Cheshire, No 617’s CO, they were taken on.
Cheshire had developed low-level target-marking techniques with No 617 and, with the arrival of Barnes Wallis’s new Tallboy bomb, the squadron specialised in attacking pinpoint targets such as concrete U-boat and E-boat shelters, aero-engines works and the V1 flying bomb sites.
During the lead-up to the Normandy invasion, Knights bombed tunnels, rail marshalling yards and bridges to block German reinforcement routes to the invasion area. The Tallboys, dropped with great accuracy on the target markers by Cheshire and his fellow marker-crews, caused devastating damage. Once the Allies were firmly established in north-west Europe, No 617 turned its attention to the [italic] Tirpitz [/italic].
After flying 67 bombing operations, Knights was rested, and in June 1945 he was seconded to BOAC to fly converted Lancasters on routes to the Middle East and Australia, which the airline was re-establishing.
Knights left the RAF at the end of 1946 to join BOAC, and over the next few years he flew the Argonaut and the Boeing Stratocruiser, the latter on the North Atlantic route. After a spell on the Britannia, Knights converted to jets; he flew the inaugural VC 10 flight to Montreal in 1966. Later he flew the Boeing 747 and was one of the fleet’s training captains. He retired from British Airways in 1976.
A very modest man, Knights gave strong support to RAF charities. He was president of the Guildford branch of the RAFA and a long-standing member of the Aircrew Association. He developed a keen interest in bell-ringing and became captain of the bell tower at St Peter and St Paul at Albury, near Guildford. A good golfer and tennis player, he was also a lifelong supporter of Fulham FC.
Bob Knights died on December 4. In 1947 he married a serving WAAF, Helen Maloney, who survived him with their two sons and a daughter.