Nineteen items. The collection concerns George Henry Albert Bilton (b. 1923, 175723 Royal Air Force) and contains an oral history interview, his log book, correspondence and photographs. He flew operations as a flight engineer with 428 and 434 Squadron.

The collection has been loaned to the IBCC Digital Archive for digitisation by Anthony Bilton and catalogued by Nigel Huckins. 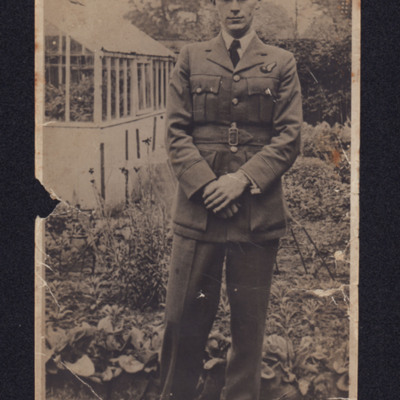 Full length portrait of a pilot officer wearing tunic with flight engineer brevet and peaked cap. Taken in a garden with greenhouse, shrubbery an trees in the background. On the reverse 'To my darling with all my love, George XXXX'. 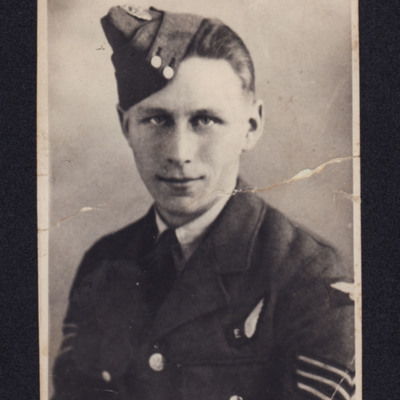 Officer outside a tent 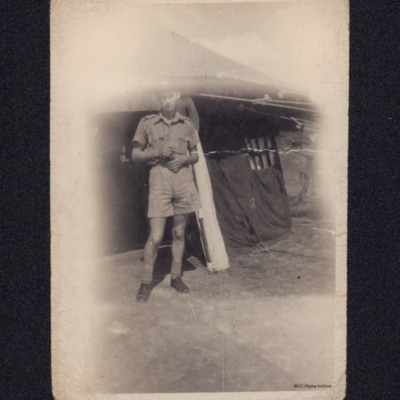 An officer wearing khaki uniform with shorts and peaked cap standing outside a tent. On the reverse 'George Burma'. 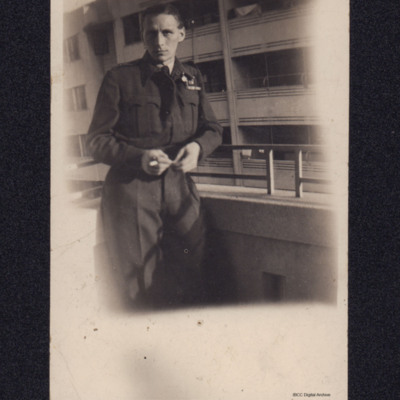 Three-quarter portrait of an airman wearing battledress with brevet standing inside a room. On the reverse 'George'. 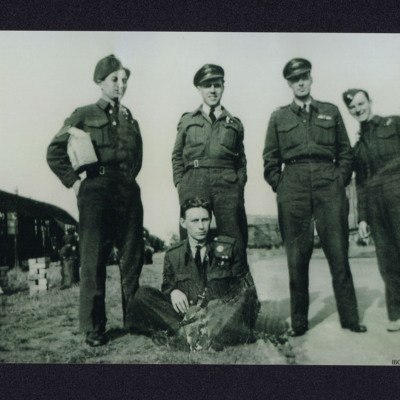 Five airmen wearing battledress, two with side caps and two with peaked caps, all with brevet. Four standing and one sitting outside huts. On the reverse ' Left to right top - O? - Bill Richardson bomb aimer, Bill Trow navigator., O?.
Bottom -… 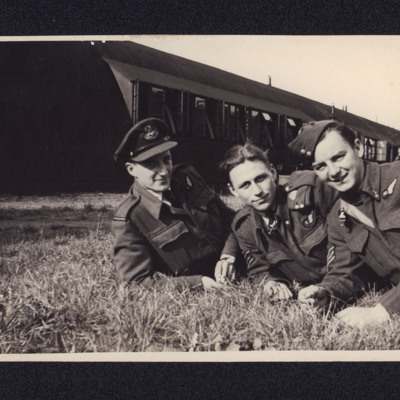 Three aircrew all wearing battledress lying on grass with hut in the background. On left a flying officer with peaked cap. To the right two sergeants, one on the right wears side cap and has Canada shoulder flash. On the reverse 'Left to right, Croft… 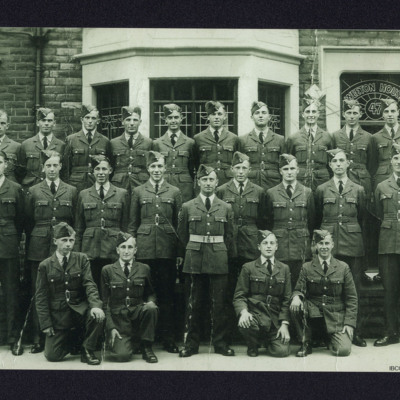 Twenty-three airmen wearing tunics with side caps kneeling and standing in three rows in front of a brick building. Bay window and doorway in building and sign 'Weeton House 47' above door. 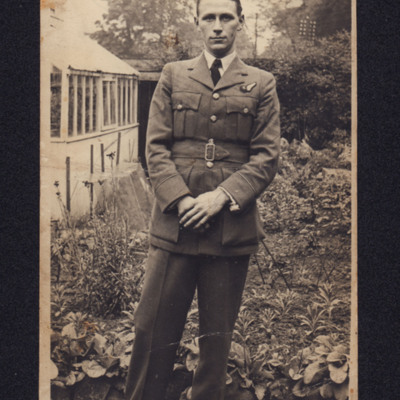 Full length image of a pilot officer wearing tunic with flight engineer brevet standing in a garden with greenhouse, shrubbery and trees in the background. 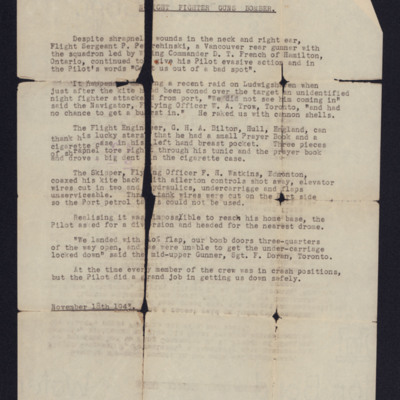 During operation to Ludwigshaven. Gives account of rear gunner Flight Sergeant P Perehinski (of Vancouver) continuing to give evasive action to pilot despite being wounded. Also mentions lucky escape of George Bilton where a prayer book and… 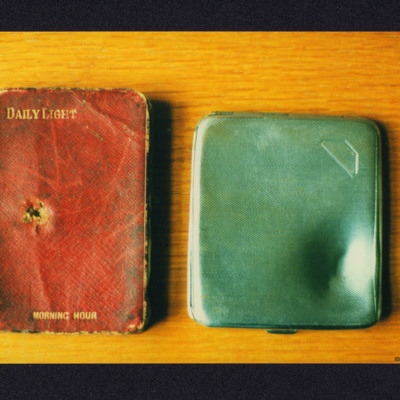 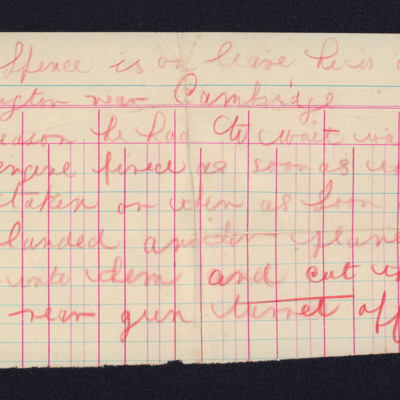 Gives reason for someone had to wait but was now on leave. Mentions engine problems and hitting another plane on landing which cut the rear turret off. Addition of sums of money on reverse. 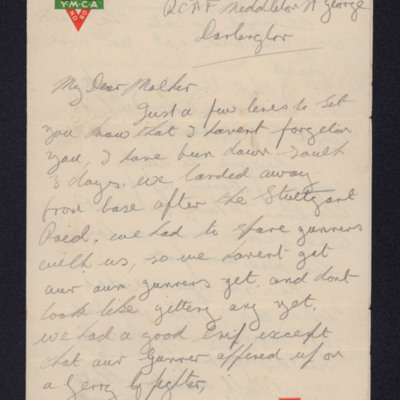 Writes that he diverted down south after operation to Stuttgart. States it was a good trip but said they still lacked their own gunners and one had opened up on an enemy fighter. Writes about time they had at diversion. Catches up on family news.

Part of letter from George Bilton to his mother 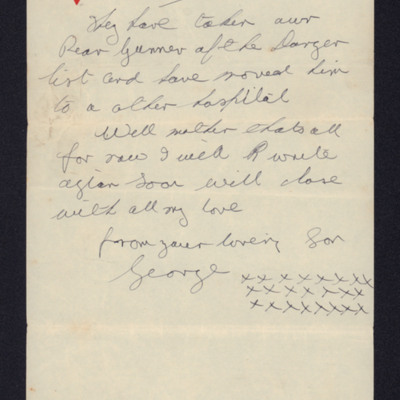 Page 4. Mentions that their rear gunner had been moved to another hospital. 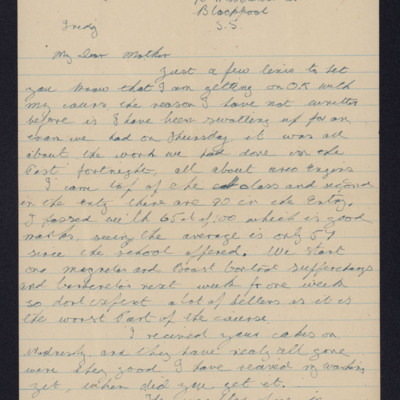 Writes while on course in Blackpool. Mentions studying for exams and relates how well he did. Comments on cakes she sent and the weather. Asks after family news and asks her to send black tie. 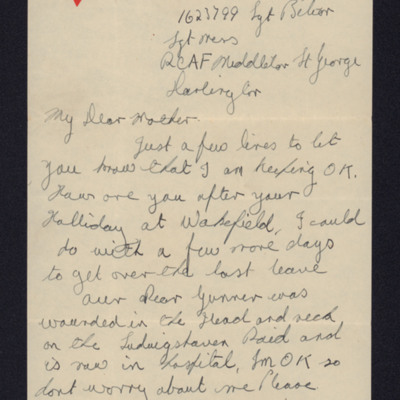 Says he is OK and asks after her holiday. Mentions rear gunner was hit in the head on operation to Ludwigshafen and was in hospital. Mentions that he will be sending her his dirty laundry and talks of weather. 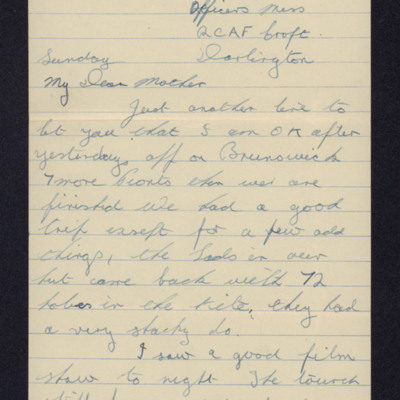 Writes that he was okay after operation to Brunswick and now had only seven left to finish tour. Returned with 72 holes in the aircraft. Relates seeing films and discusses clothing. Mentions a visit by the King to Middleton St George. 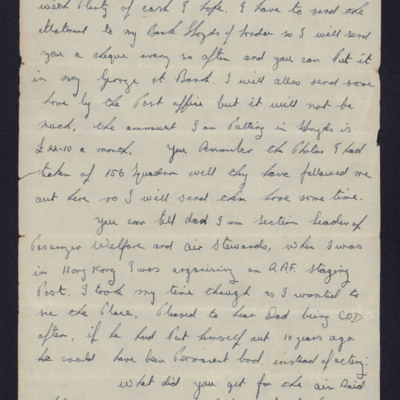 Page two of a letter. Writes of financial matters. Mentions photographs and asks to pass news on to father. Asks whether recipient got good price for air raid shelter.