The collection has been donated to the IBCC Digital Archive by Scott Weeden and catalogued by Nigel Huckins. 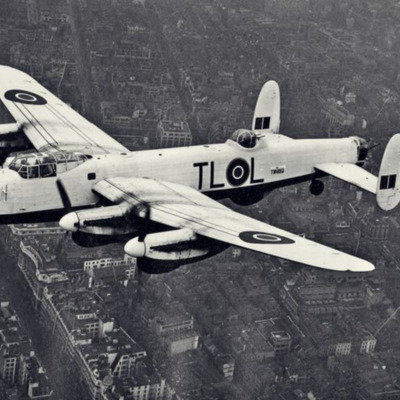 Identification kindly provided by Liam Moore of the Unidentified photos of the British Isles Group. 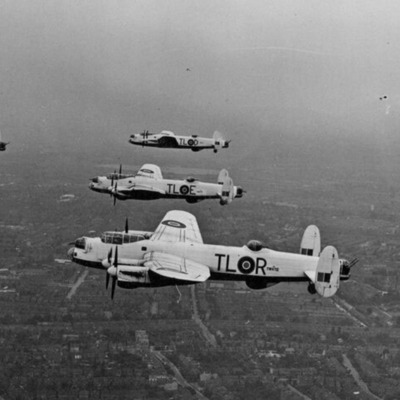 Five Lancasters one ahead, three in line and one in rear, in formation flying over a town. Squadron identification 'TL'. 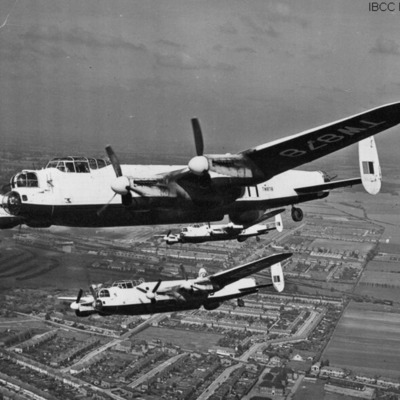 Three Lancasters (leader registration 'TW878') airborne in echelon formation. Below is a town and open countryside 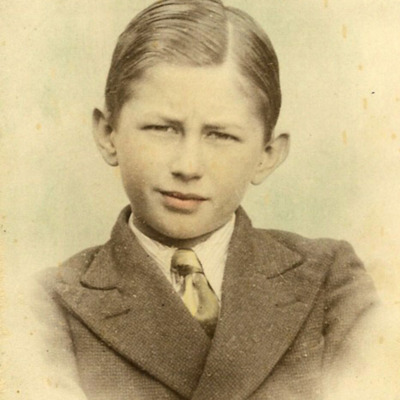 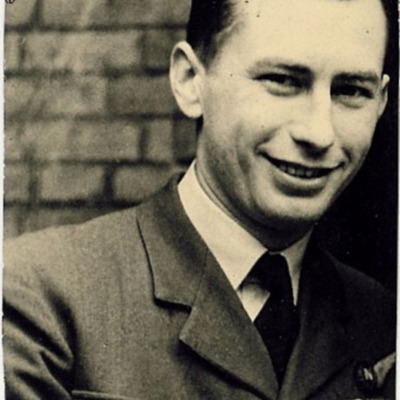 This item was sent to the IBCC Digital Archive already in digital form. No better… 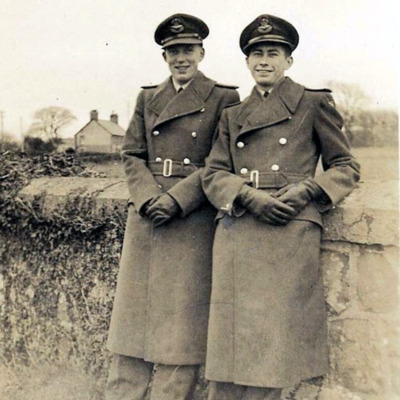 Two officers wearing greatcoats and peaked caps standing in front of a stone wall with house in the distance, Submitted with caption 'Reg England Unknown Date'. 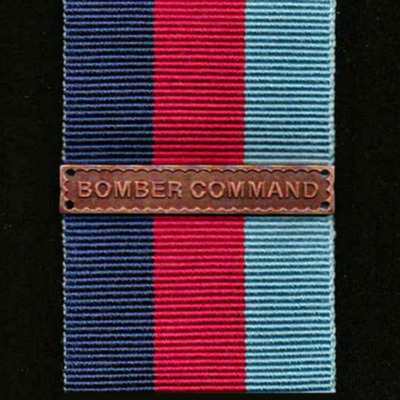 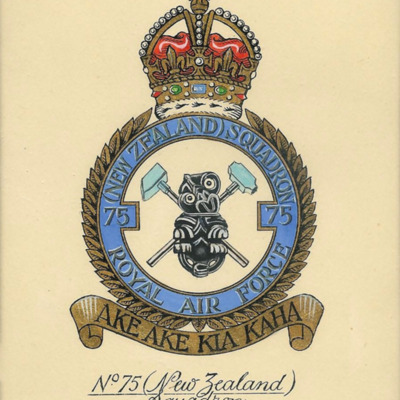 Cloth navigator brevet and ribbons for the 1939–1945 Star and the defence medal mounted in frame. 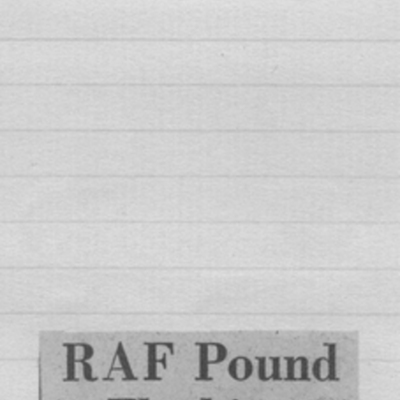 Article describing attack on Leuna synthetic oil plant and subsequent nights operations on three other targets. This was the fourth successive night attacks by the RAF on Germany. 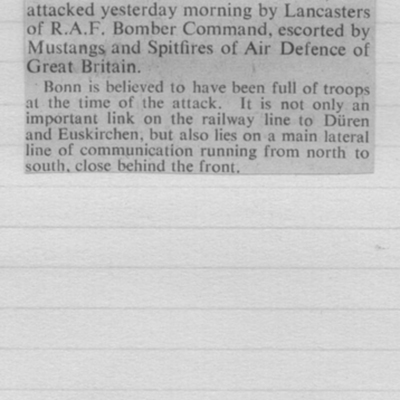 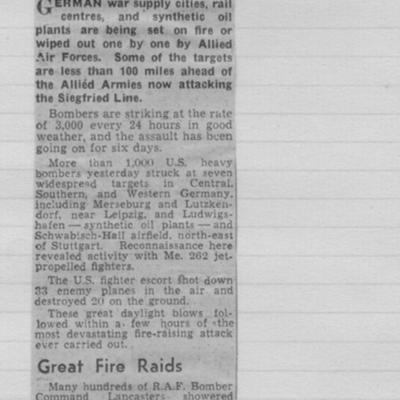 Letter from under-secretary of state for defence covering enclosed awards granted for service during war of 1939-45 for Flight Lieutenant R C Weeden. Battle order for 9/10 September 1944. List aircraft and crews for operations as well as duty personnel 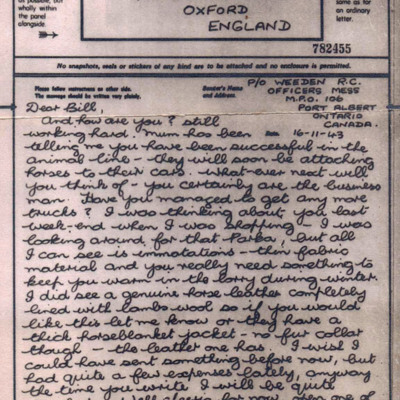 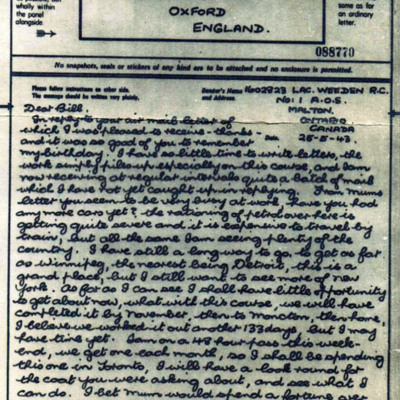 Writes that he had been so busy he had little time to write letters and catch up with all his mail. Asks after Bill's work and comments on petrol rationing in Canada. Mentions although it was expensive to travel by train but he was seeing plenty of… 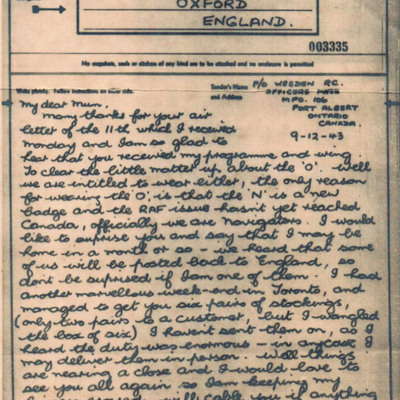 Explains about 'O' and 'N' brevets, both were for navigator but the second was a new badge and had not arrived in Canada yet. He writes that he could be home in a month as some of them were getting posted back to England, and he could be one. Says he… 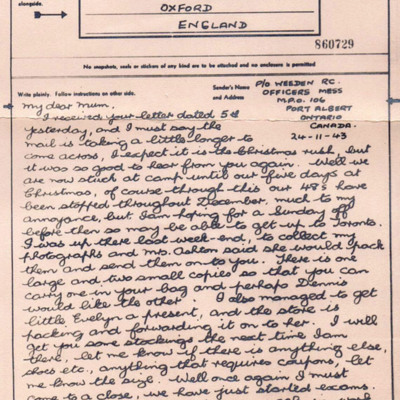 Comments that mail was taking a log time to get across. Writes they were now stuck in camp until their five days Christmas leave and their December 48 hour passes had been stopped. Was hoping to get to Toronto next Sunday. Writes about getting a… 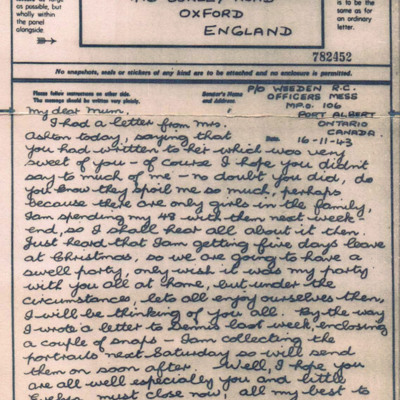 Mentions that he had a letter from his Canadian friends who told him that she had written to them and tanked her. Mentions he will be going to see them on his next 48 hour pass. Writes that he is getting five days leave for Christmas and they would… 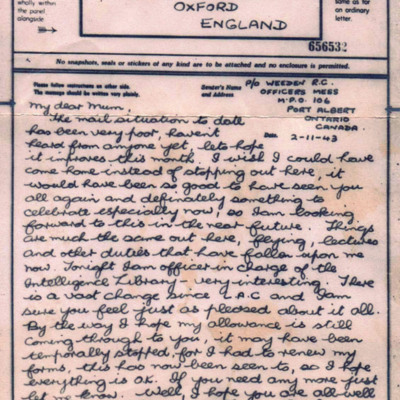 Reports that mail situation was poor and he had not received any letters lately. Wished that he could have come home and seen them rather than staying in Canada. Writes that things were much the same there, flying, lectures and other duties. Mentions… 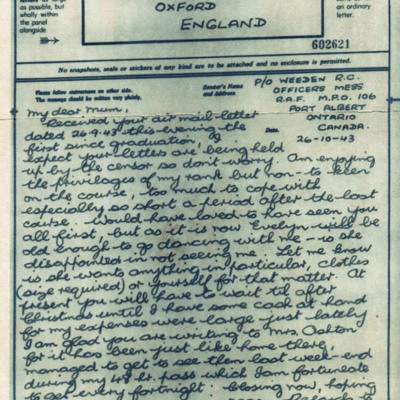 Mentions that her letters were probably being held up by censor. Writes he was enjoying the privileges of rank but was not too keen on his course. Sorry that he was not able to come home to see them all. Asks her to let him know if they want anything… 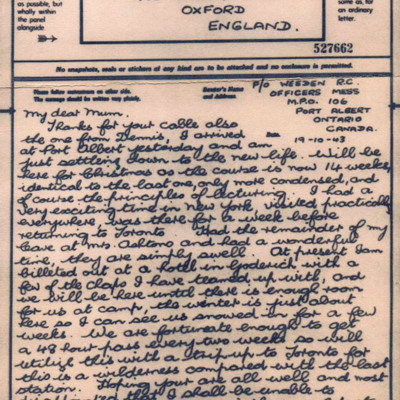 Writes he was settling into his new life and that his new course would last 14 weeks and would include lecturing. Says he had a good time in New York before returning to Toronto. Spend the remainder of leave with Canadian friends. Currently billeted… 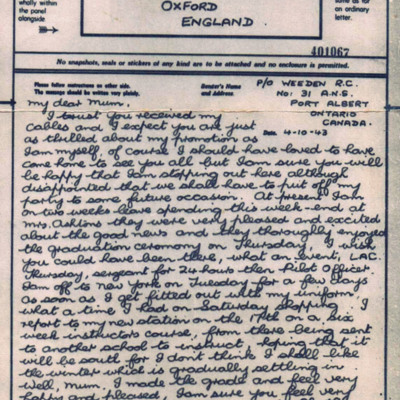 Writes that he is thrilled with his promotion and although he would have loved to come home, was sure she would be happy that he was staying in Canada. Says he is on leave and spending time with Canadian friends. Wished she could have been at…
View all 89 items