The collection has been donated to the IBCC Digital Archive by Catherine Millington and catalogued by Barry Hunter.

A biography of Fred. In addition it includes histories of aircraft and squadrons he served in, Details are included of airfields he served at. Additionally there are biographies of various servicemen associated with Fred's squadrons and service.
At…

General Information about Fred. It records his date of birth and death with a comprehensive list of his family. Included are details of his funeral.

A obituary for Fred describing his life before, during and after his wartime service.

"Fred" by Sylvia White (his cousin)

Fred's life story from early days sneaking downstairs to drink the dregs at his parent's public house, playing rugby and studying hard, becoming an accountant, learning to be an accurate rifle shooter then joining the RAF as a an air gunner. He…

Poem for a Rear Gunner and A Gunner's Vow 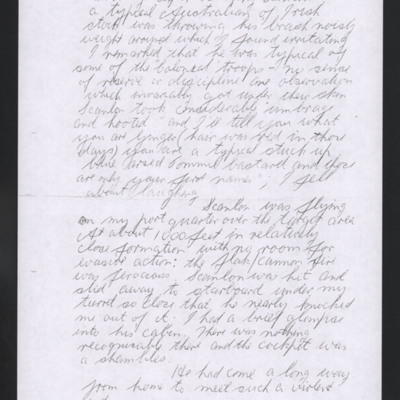 An extract from Fred's autobiography about Scanlon. Both men were flying close together when Scanlon's aircraft was shot down. 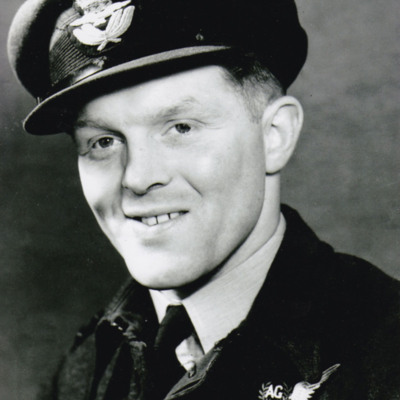 A head and shoulders portrait of Fred wearing his DFC ribbon and air gunner brevet. 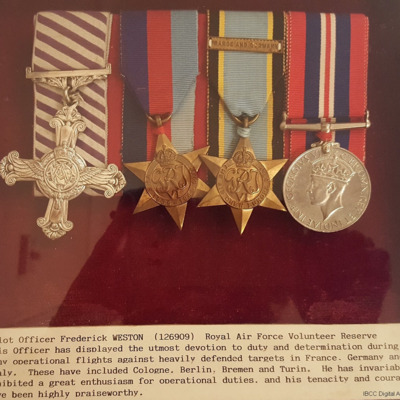 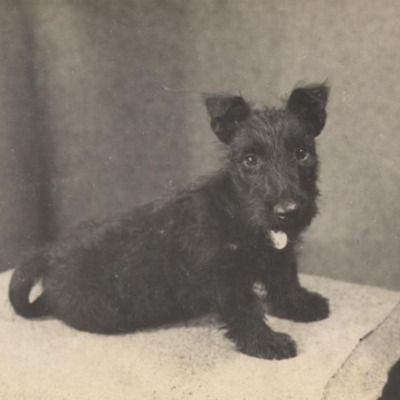 Gary sitting on a mat

Fred Weston and his parents 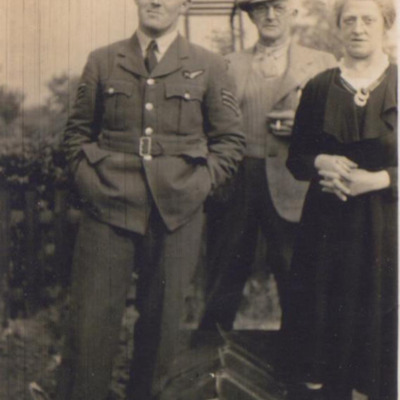 Fred standing with his parents in their garden. Information supplied with the collection states 'Fred, with Bill and Ivy (parents) Backgarden at Pendeen 1940'. 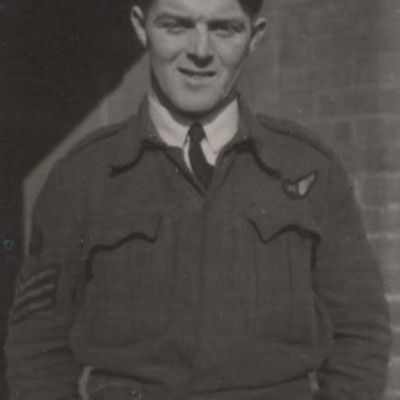 A half length portrait of Fred wearing his air gunner brevet. 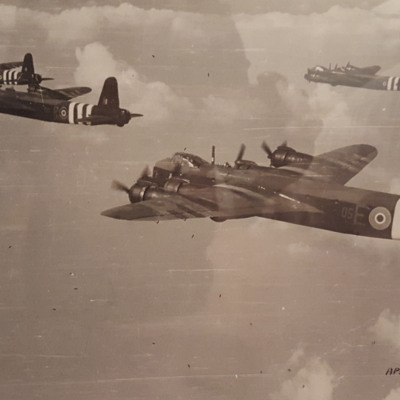 An air to air photograph of four Stirlings. Handwritten in a corner is 'Approaching Arnhem Sept 20th 1944'.
Information supplied with the collection states that Fred is rear gunner in the lead aircraft. 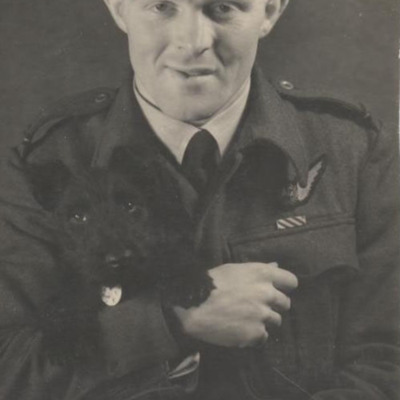 A half length portrait of Fred in uniform, holding his dog, Gary.

25 Airmen and a Stirling 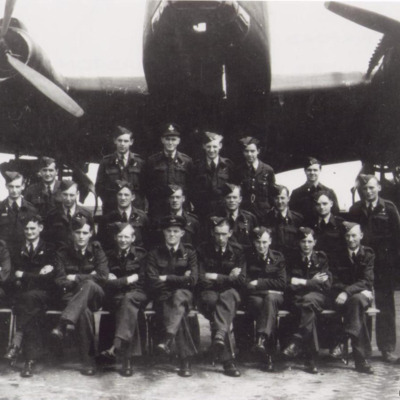 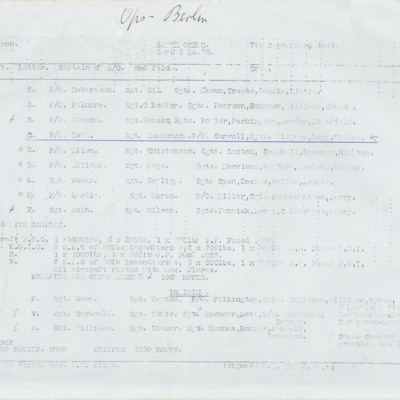 A battle order for 101 Squadron listing aircraft and crew. Handwritten at the top is 'Ops -Berlin'. 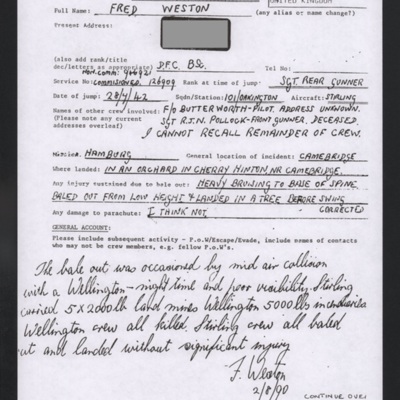 Fred's account of the night he baled out after a mid-air collision. 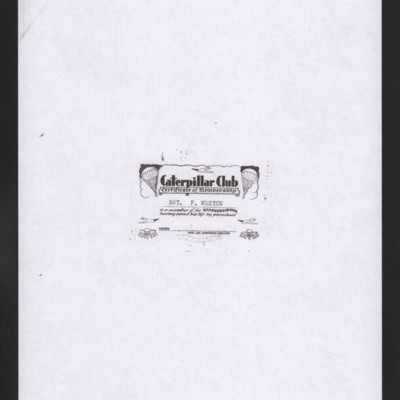 A membership card awarded to Fred for safely parachuting from his aircraft. 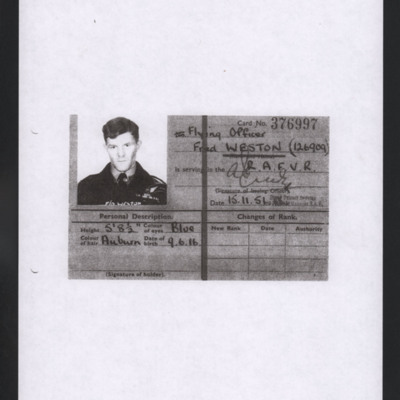 Fred's identity card when serving in the RAF Volunteer Reserve 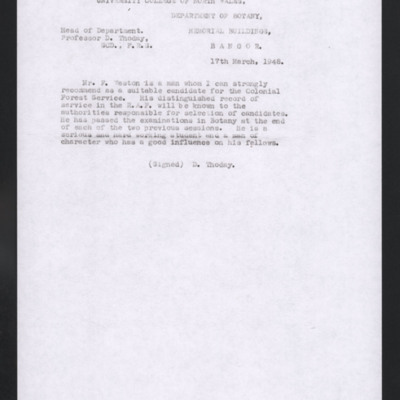 A reference written for Fred by the Professor of Botany at Bangor. 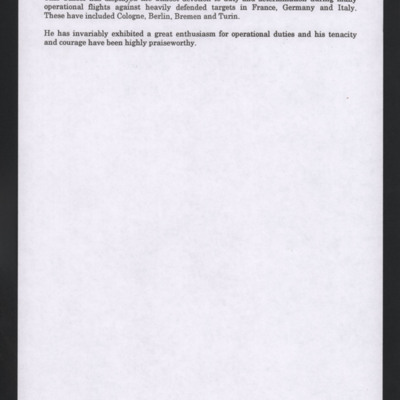 A citation received by Fred for his devotion to duty.
View all 20 items