The collection has been loaned to the IBCC Digital Archive for digitisation by Suzanne Fletcher and catalogued by Barry Hunter.

Three Airmen and a Grumman Goose 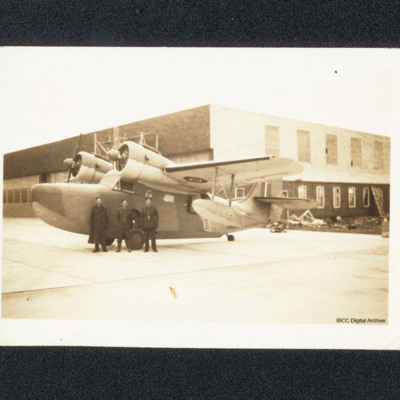 Three airmen standing at the front of a Grumman Goose, behind is a hangar. On the reverse 'AOC's Grumman Goose'. 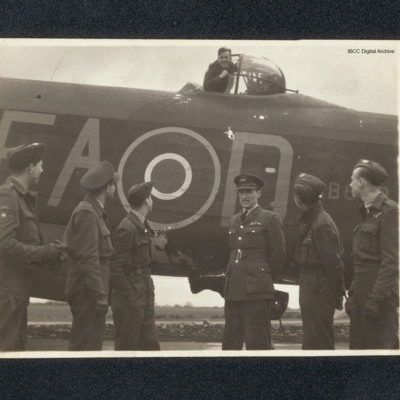 Six airmen on the ground and one airman at the damaged mid-upper turret of Lancaster 'EA-D'. On the reverse 'Uncle Tom on the left'.

Thomas Thomson's crew and a Lancaster 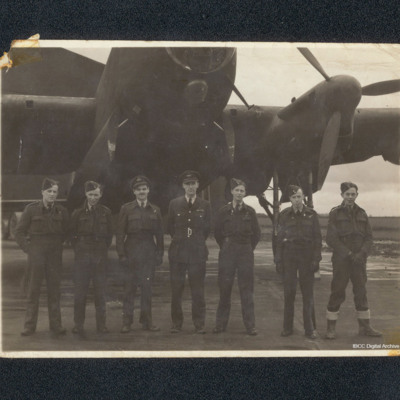 Thomas Thomson on the right of a group of six more airmen. They are standing in front of the nose of a Lancaster. On the reverse 'Uncle Tom on the right'. 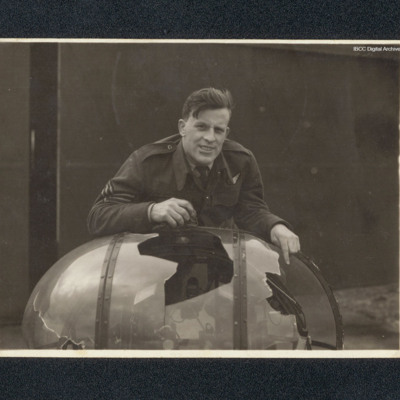 An airman examining the damage to a mid-upper turret on Lancaster 'EA-D'. The plexiglass has been damaged.

Seven Airmen and a Damaged Wing 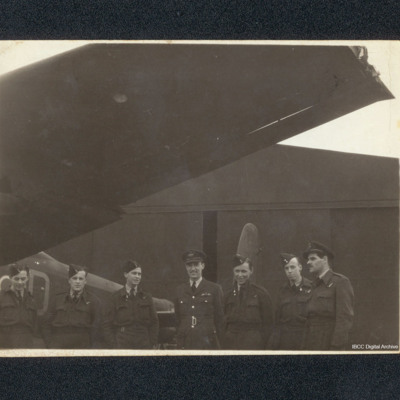 Two photographs of seven airmen standing underneath the damaged wing of a Lancaster. 'EA-D'.
On the reverse of the first photograph the annotation reads 'Uncle Tom on left'.
In the second photograph one of the men is pointing out some damage. 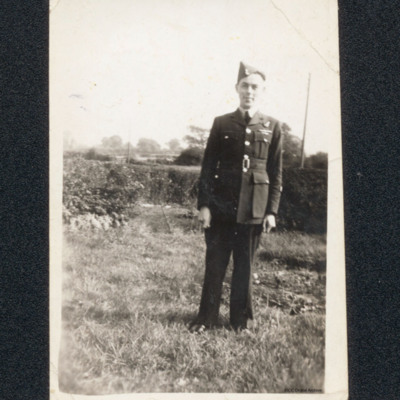 Thomas standing in uniform in a garden. He is wearing his brevet. On the reverse 'Tom'. 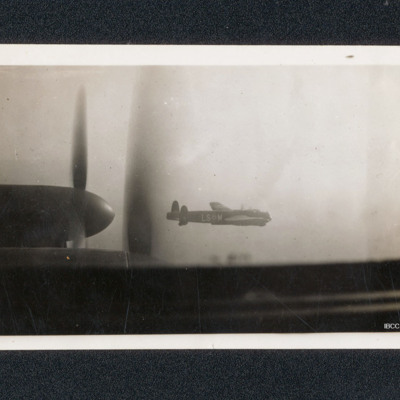 An air-to-air photograph of the starboard side of a Lancaster 'LS-M' from 15 Squadron. The wing and propellers of the other aircraft frame the image.

Thomas Thomson and his Bride 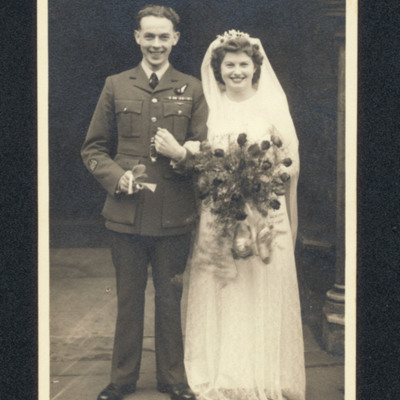 Thomas on his wedding day, standing with his bride, Kathleen Rogers, outside the church. 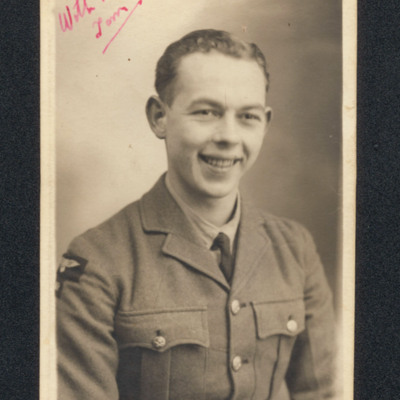 A half-length portrait of Thomas, annotated 'With Love Tom'. 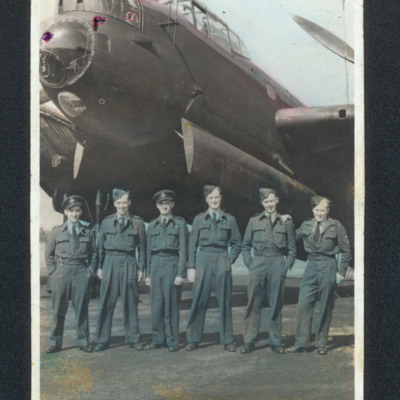 Six airmen standing at the nose of a Lancaster. Thomas Thomson is second from the right. 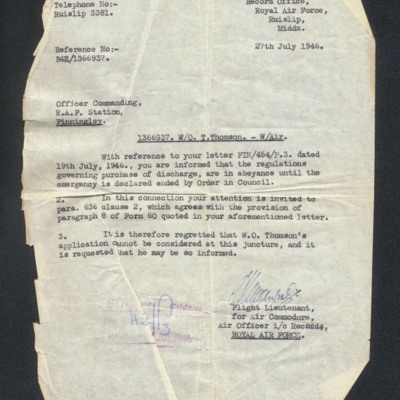 The letter advises Thomas Thomson that he cannot purchase his discharge. 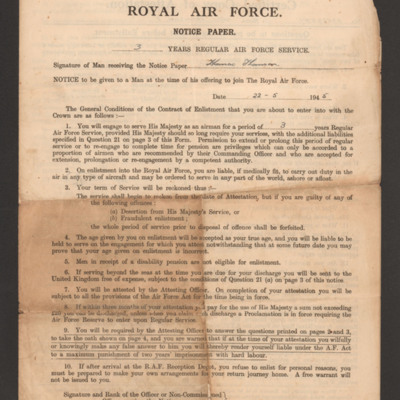 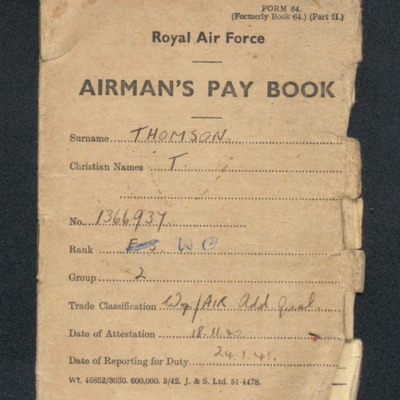 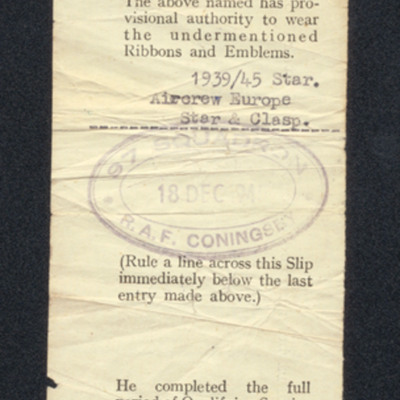 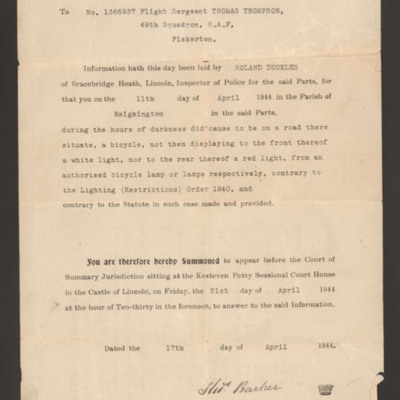 A summons for cycling without lights. 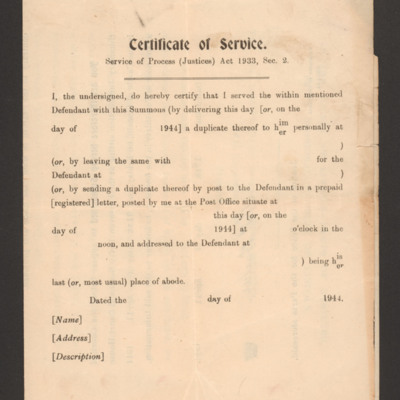 An uncompleted printed document referring to service in the forces. 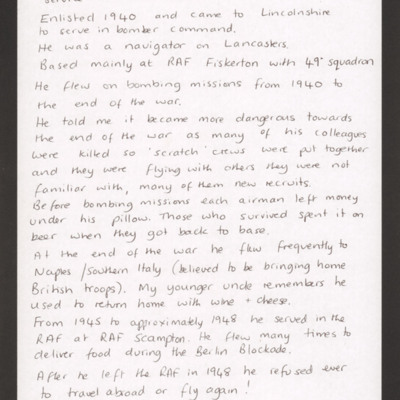 A brief biography of Thomas Thomson covering his years in the RAF and after.
View all 18 items