17 items. The collection concerns Flight Sergeant Hugh Brenton Jones (1925 - 1944, 1866363 Royal Air Force) and contains documents and photographs. He flew operations as an air gunner with 51 Squadron and was killed 18 December 1944.

The collection has been donated to the IBCC Digital Archive by Rea Camus and catalogued by Barry Hunter.

Additional information on Hugh Brenton Jones is available via the IBCC Losses Database.

Letter to Daphne from Hugh Jones 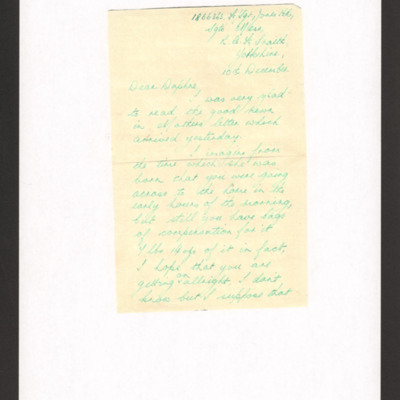 Hugh congratulates Daphne on the arrival of her baby.

Letter to Daphne from Hugh Jones 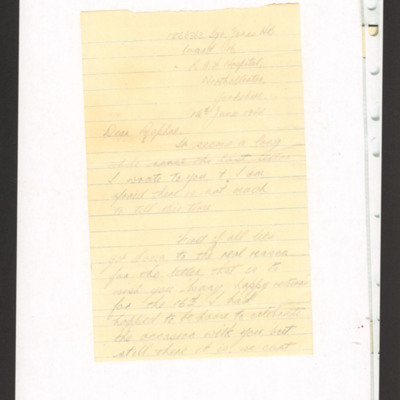 Hugh apologies for not having written and wishes Daphne happy birthday. He promises to repay a £1 that he borrowed from her.

Cartoon 1 is a patient undergoing an X-ray surrounded by spiders, captioned "Take a deep breath - hold it - thank you Ward 16 RAF Hospital Northallerton'.
Cartoon 2 is a man in a hospital bed. Its is annotated 'Miles & Miles of Smiles? Oooh! Oooh!… 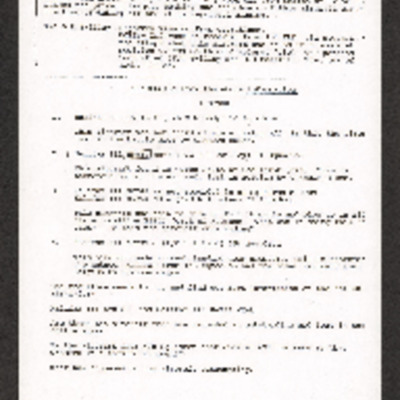 A report on what happened to Halifax NP934. Information collated from operational record books, RAF reports, Herbert Browne's report (sole survivor of NR118 crash), Henry Wagner's report, analysis of the losses on the night of 17/18 December and SHJ… 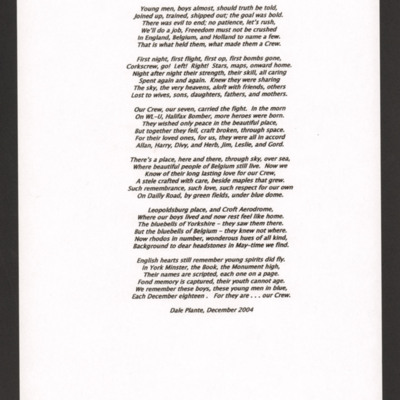 A poem about the loss of Halifax, WL-U.
A second sheet states 'Written by Dale Plante niece to Allan Kurtzhals'. 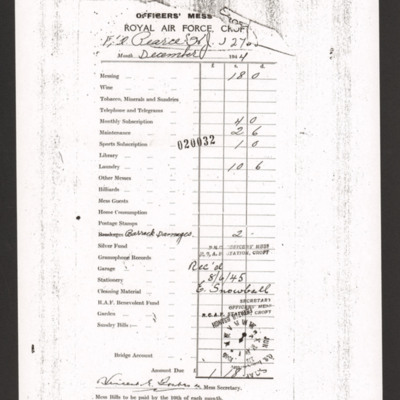 A copy of Harry Pearce's mess bill with 2/- deducted for damages. 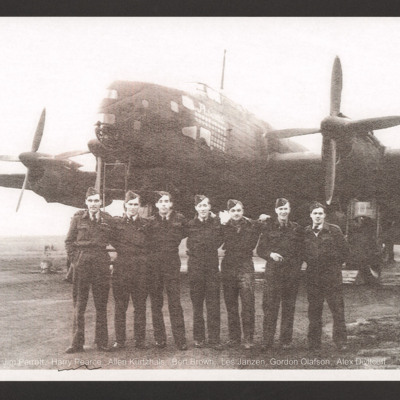 Seven airmen at the nose of a Halifax. Underneath is a caption with their names 'Jim Parrott, Harry Pearce, Allen Kurtzhals, Bert Brown, Les Janzen, Gordon Olafson, Alex Divitcoff'. 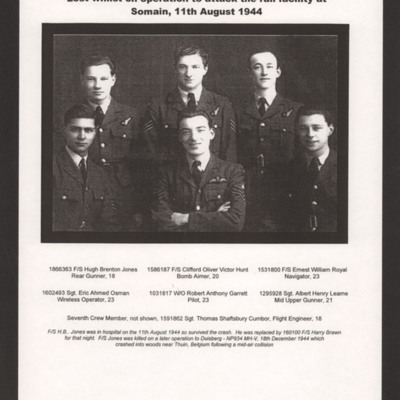 A document with a photograph of the crew, including Hugh Jones, of the Halifax that was lost whilst on an operation on the railway at Somain. Hugh Jones was in hospital and he was replaced by Harry Brown. 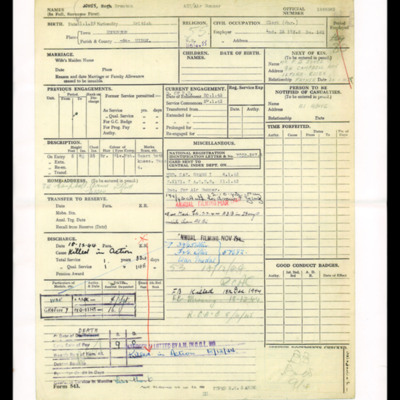 Two pages with Hugh's service record. Hugh lied about his age in order to join up. On the page is annotated his correct birth date, 21 June 1926. On the form it is 21 January 1925.

The Crash of Halifax NP934 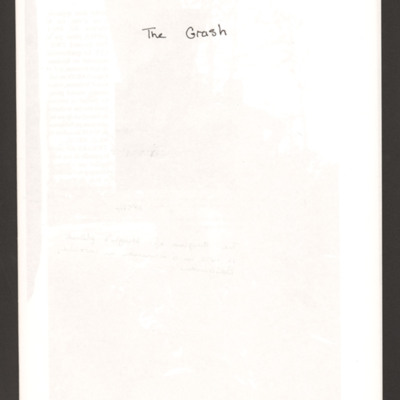 A section of six pages referring to the crash of the Halifax.
Page 1 simply states 'The Crash'.
Page 2 is a report of the crash in French and an eye witness report in English by Jean Bodart.
Page 3 is a copy of a photograph which appears on page… 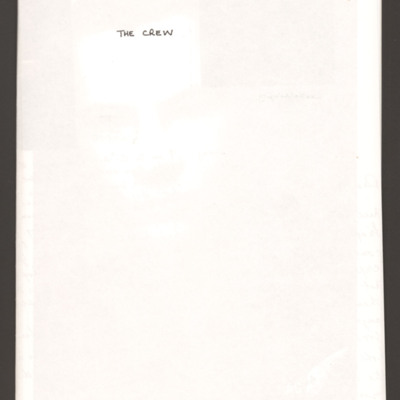 A section with a header page, seven photographs and two letters.
The first page is the header which states 'The Crew'.
Photo 1 is a head and shoulders portrait of Hugh Jones, captioned 'Hugh Brenton Jones - Air Gunner'.
Photo 2 is a head and…

Report and Research on the loss of Halifax NP934 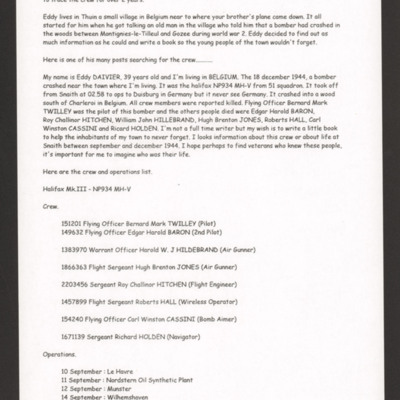 The report covers the loss of the Halifax with a focus on Hugh Jones. The research was undertaken by Eddy Daivier. He lists the crew and some of their operations. 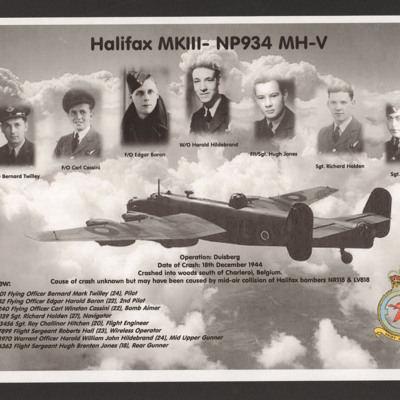 A commemoration of the seven men who died after a possible mid-air collision over Charleroi, 18th December 1944. The photographs of the seven men, the Halifax and their names are listed, plus a 51 squadron crest. 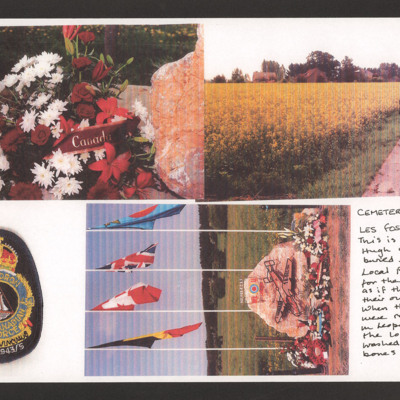 A collage of three photographs and a cloth 434 squadron badge.
Photo 1 is the base of a memorial stone with a Canada sash and a floral bouquet.
Photo 2 is the cemetery where Hugh was buried, now a field.
Photo 3 is the memorial stone surrounded… 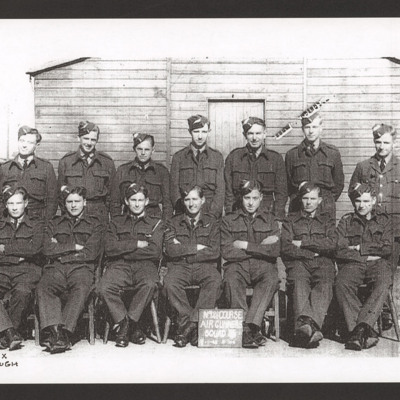 14 airmen arranged in two rows outside a wooden hut. 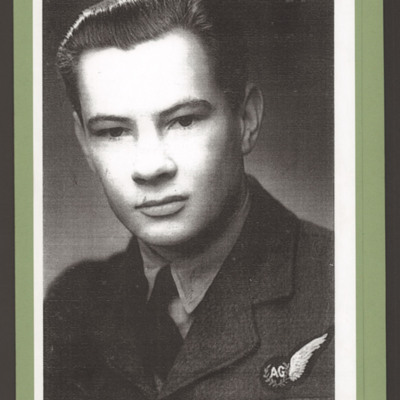 Pilot to Navigator - Where are we?

Henry, volunteered for the RAF and learned to fly Tiger Moths at Brough. He then was transferred to South Africa on a troopship. His flying training came to an end after a poor solo flight. He was retrained as a navigator. On completion of his…
View all 17 items