17 Items concerning Flight Lieutenant George Dunmore DFM (5601) who flew 45 operations as a flight engineer on Lancaster with 83 Squadron at RAF Scampton and then as part of the Pathfinder Force at RAF Wyton. Commissioned in 1944 he continued to serve in the general duties branch as flight engineer and then equipment branch until 1967. The collection contains his logbook, an account of a maximum effort operation, official documents and letters, a history of an individual aircraft, pathfinder certificate, recommendation for DFM, career notes as well as photographs and memorabilia. A sub-collection of 58 photographs of aircraft under repair or being manufactured in factories. 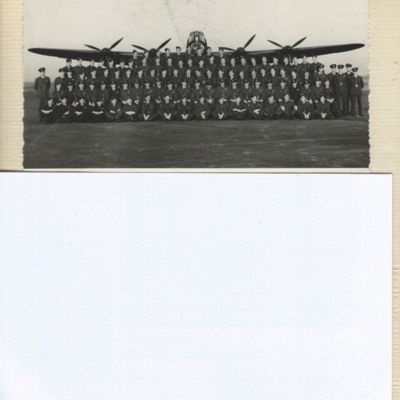 102 aircrew wearing tunic and peaked or side caps sitting and standing in five rows in front of a Lancaster. There is a defaced set of characters in the top left of the photograph. Captioned 'August 1942, Wyton: Pathfinder Force'. 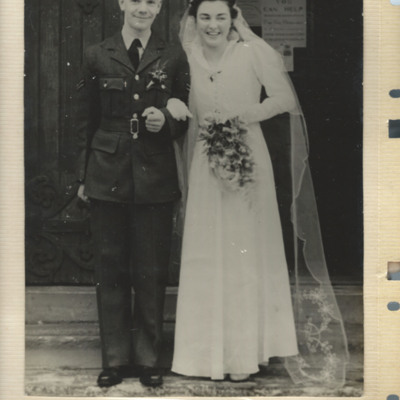 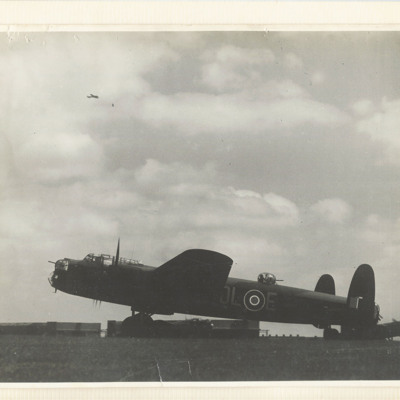 Lancaster R5669, letters OL-E (also known as “E for Edward”) from the side. Two other Lancasters are visible on the ground in the mid background facing in the opposite direction, in the far background there are two hangers and, in the air, a… 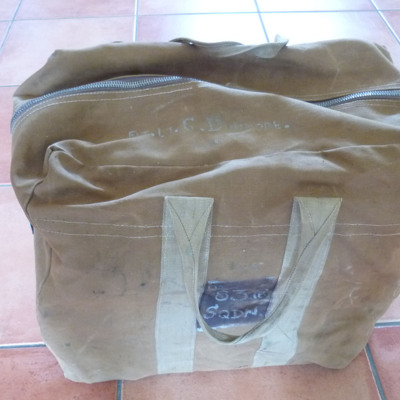 Flight bag belonging to George Dunmore from his tenure with 83 Squadron, the bag has “Flt Lt G Dunmore.” on its top near the zip, and “83.(B) Sqdn.” On its side. Submitted with caption; “George Dunmore’s flight bag which accompanied him… 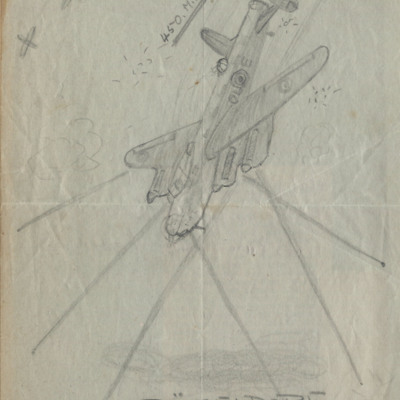 A Lancaster, caught in searchlights with anti-aircraft fire bursts around it, diving toward Dusseldorf on the night of 9 September1942, with a title reading “The Night of September 9th 1942.” A note next to the Lancaster reading, “450.… 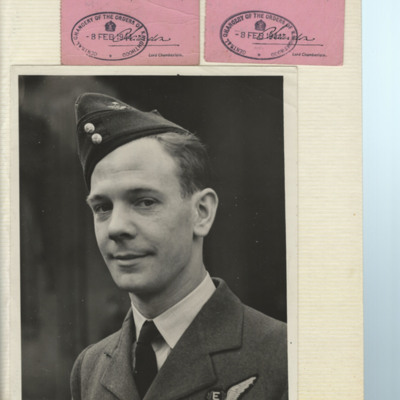 Head and shoulders portrait of George Dunmore wearing tunic with flight engineer brevet, Distinguished Flying Medal ribbon , Pathfinders badge and side cap. At the top two tickets to an investiture at Buckingham Palace. 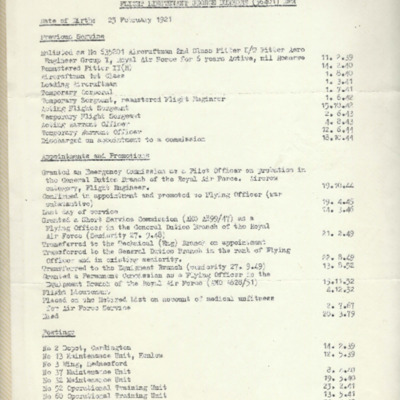 Enlisted as fitter in February 1939 and commissioned in November 1944. Lists promotions, appointments and postings up to November 1965. 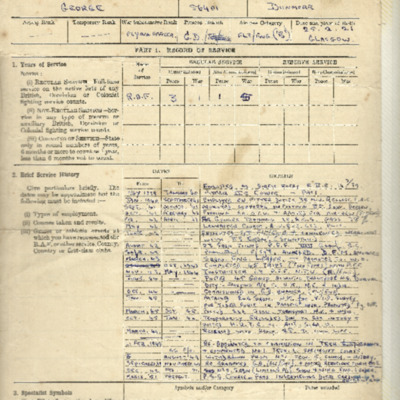 Candidate for permanent commission in the aircraft control branch of the Royal Air Force. Includes years of service, service history from 1939- 1951 and honours and awards. 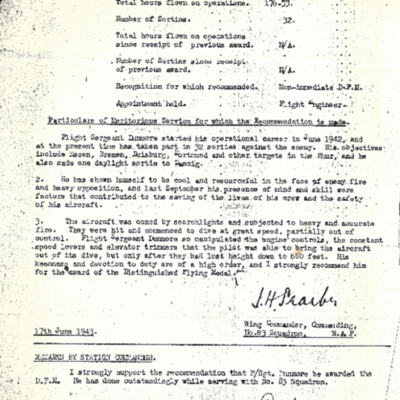 Includes particulars of meritorious service of Flight Sergeant Dunmore and mentions 32 operations, including daylight sortie to Danzig. Goes on to describe actions when coned by searchlight which helped pilot recover aircraft from dive. 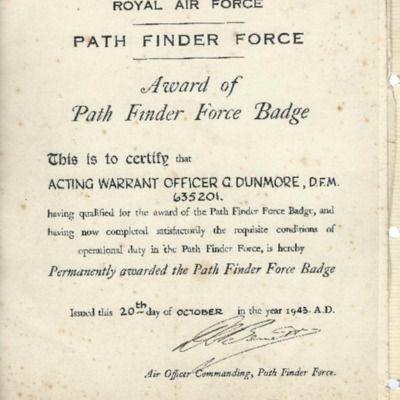 Operational history of Lancaster 1B R5868 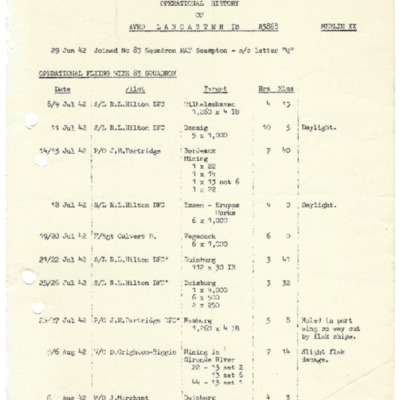 List of 135 operations flown by Lancaster R5868 from 8/9 June 1942 until 23 April 1945. List includes pilot, target, bomb load. hours flown and comments. Was with 83 Squadron at RAF Scampton and Wyton then 467 Squadron at RAF Bottesford and then RAF… 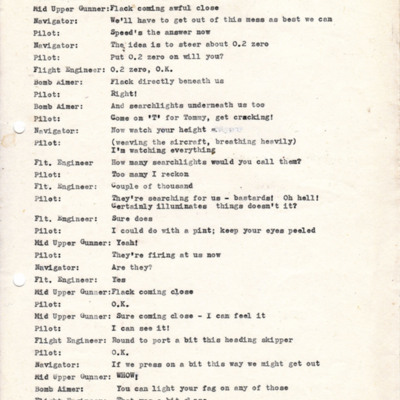 Transcription of extract from a recording made in a Lancaster bomber while over target. Gives crew intercom commentary including bombs gone and reports on defences. 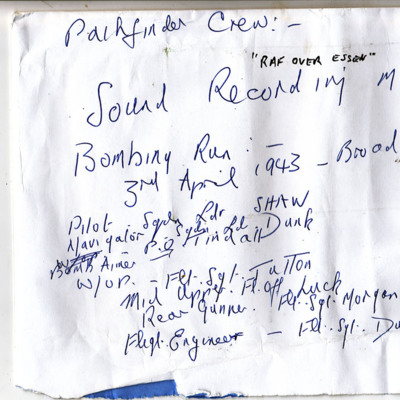 A note regarding a recording made by the BBC of an operation on 3 April 1943, where the recording was made on the aircraft which George Dunmore was a Flight Engineer. The note gives the names, professions and ranks of the crew.

Letter to George Dunmore from the Ministry of Defence 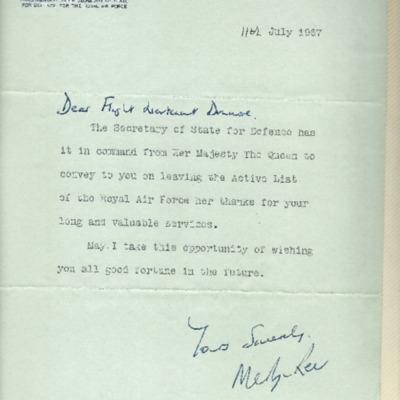 Thanks George Dunmore for his long service, signed by Merlyn Rees, Under-Secretary of State.

Letter to Mrs Louise Dunmore from the Air Ministry 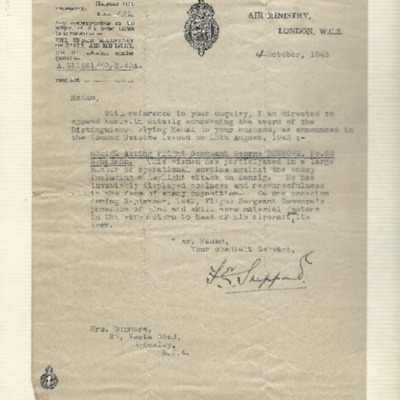 Passes on the London Gazette citation for George Dunmore’s award of a DFM for participating in a large number of operational sorties including a daylight attack on Danzig. Written in response to an enquiry on her part. 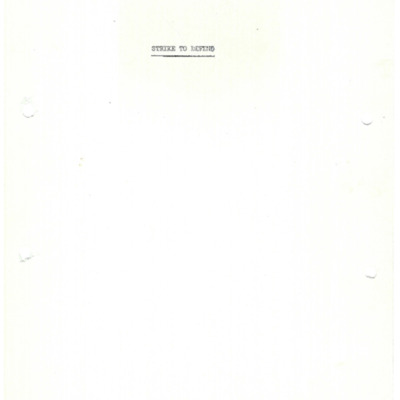 A 25 page account of the preparation for, and carrying out of a maximum effort operation against Duisburg by Lancasters of 83 Squadron at RAF Wyton, part of 8 Group Bomber Command. Account provides detailed description of preparations, briefing and…

Rear section of Lancaster fuselage on a trailer 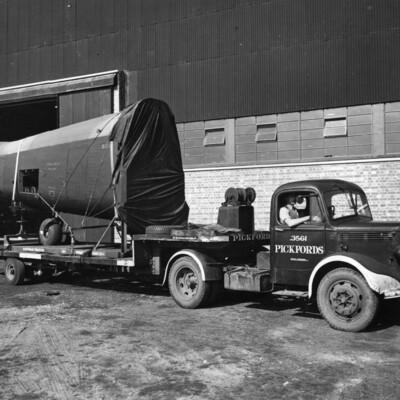 Pickford's cab on the right attached to trailer with part of aircraft fuselage loaded, Behind to the left a large doorway in wall of a factory. Submitted with caption 'Repairs to Lancaster bombers. Rear section fuselage completed and loaded for… 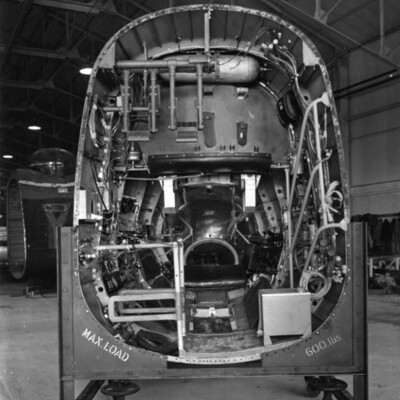 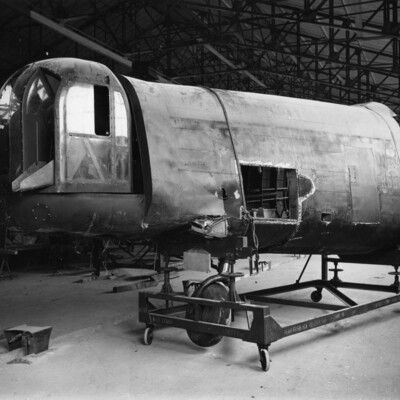 Side view of rear fuselage of a bomber with rear turret at left-hand end. Damage is visible on lower and starboard side. Resting on a trolley. Submitted with caption 'Repairs to Lancaster bombers. Damaged rear fuselage (D4) before repairs'. 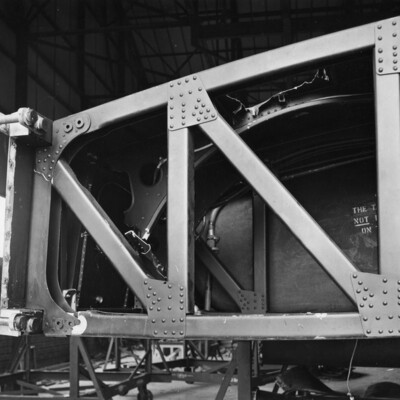 Rear fuselage of a Lancaster on a trailer 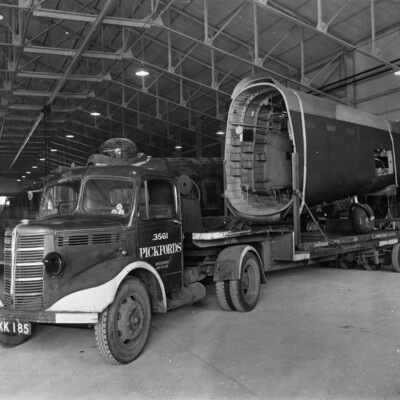 View inside a large factory dispatch shed. On the left a Pickford's cab attached to a trailer on which is loaded part of an aircraft fuselage. Submitted with caption 'Repairs to Lancaster Bombers. Completed rear fuselage (D4) loaded for despatch'. 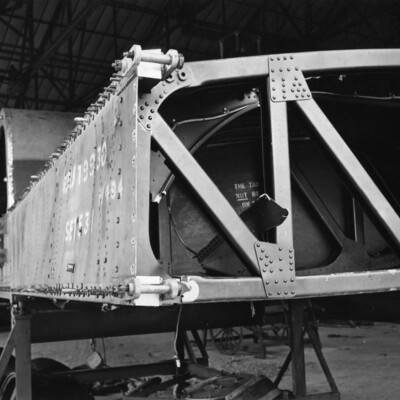 View end on of an aircraft wing centre section resting on a trolley. Submitted with caption 'Repairs to Lancaster bomber. Centre section on repair trolley'. 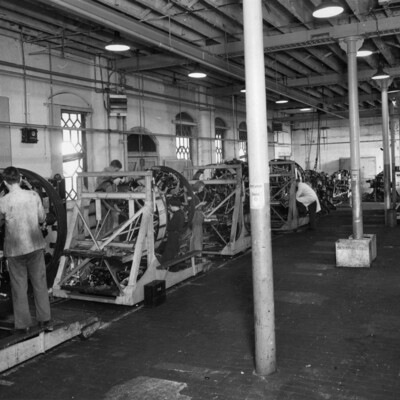 From the bottom left to centre right a line of engine structure jigs with engines mounted. Men are working on the first two engines from the left. A man in white coat is working on the forth and a woman is standing between second and third engine.… 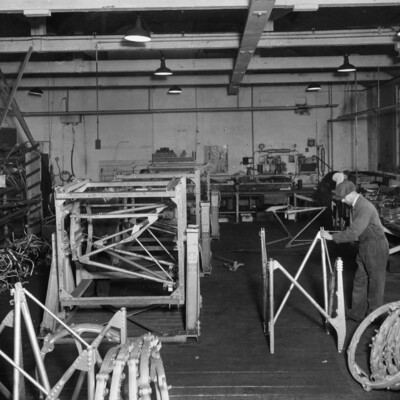 View inside factory workshop. On the right a man is building a engine structure jig from metal tubes. Right top a man is working behind a long bench. Centre left a row of completed jigs. Far left a pile of scrap metal and shelves. Submitted with… 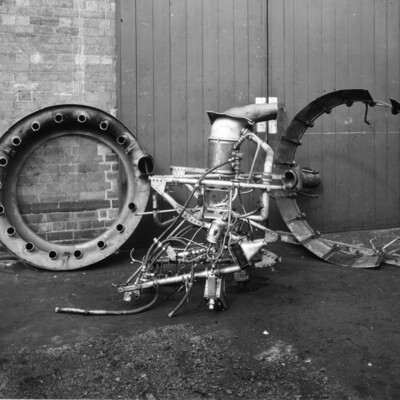 Two large metal ring engine mountings either side of an engine part with many pipes. In the background a double door and brick wall of a building. Submitted with caption 'Repairs to Hampden Bombers. Pegasus xv1111 Engine Mounting before repairs'.
View all 75 items