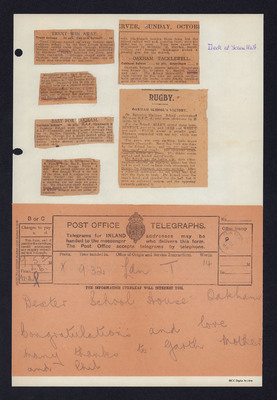 Six newspaper cuttings and a telegraph form mounted on a album page.

Trent College gained an away victory over Oakham School. In the first fifteen minutes Oakham scored three times through Ettridge, Rintoul, and [underlined] Dexter [/underlined], the first being converted by Gillmore. Parker followed for Trent and Price converted. Ettridge scored again for Oakham and Parker twice for Trent, one of which was converted by Atkinson.

HIPPODROME (G.M., Cyril Percival [missing] Wee Georgie Wood has plenty of scope for his talents in “The Douglas Follies of 1928.” Supporting him in this attractive revue are a talented company; who include Jennie Hartley, a pantomime favourite in Newcastle; Baby Love, who is dainty and diminutive; [underlined] and Sheila Dexter, [/underlined] a graceful dancer.

Oakham School were much too good for R.A.F. (Cranwell), and they scored through Dexter (2), Martin, Elphick, Fisher, Allbrook, and Extridge. Except for a short period after the interval, the school attacked continually. The School backs showed great confidence and handled well.

HIPPODROME (L. F. B. Goering: M [missing] W. Parham Wells; Mus. D., Harry Birtwhistle). – “The Douglas Follies od 1928” drew packed audiences on Monday. Wee Georgie Wood is the pet of the show, and in conjunction with Dolly Harmer (an old favourite) achieves much success. Jennie Hartley is charming and her songs are popular. The remarkably clever dancing of [underlined] Sheila Dexter [/underlined] and the fine vocalisation of Robert Hodgson also are added attractions.

Deck at Scrum Half.

With Blackheath scoring three tries, but the School rallied well and, pressing hard, were unlucky not to score. Tries were scored for Blackheath by Hubbard (2), Hayden, Devitt, Collins, and Brough. Mermagen kicked a penalty goal for the School.

Oakham School’s scorers against Grantham were Fisher (2), Gillmore (2), Martin, [underlined] Dexter [/underlined], and Lees. The School thoroughly earned their victory by fine play all round, particularly among the backs, whose deadly tackling gave the visitors no chance of scoring.

On Saturday Oakham School entertained Edgware R.F.C. A. and were victorious by 26 points to 5.

For the School, ALLEN scored three tries, RINTOUL, two tries, and LEES and WHITE one each. PRICE scored a penalty goal. Edgware responded with one try, which was converted.

The game was very exciting, both teams pressing alternately. Some fine work was done by the School backs, and [underlined] the full back was very sound and steady. [/underlined] The opposing three-quarters seldom got going. The School scrum pushed and heeled magnificently.

[Underlined] The School was the better side, [/underlined] their three-quarters playing an excellent game, but they had to work hard to keep their opponents out. [Underlined] Dexter, for Edgware, was very unlucky. [/underlined] After a splendid movement, he got away and had only the back to beat. He kicked over the back’s head and speeded for the ball, but it gave an awkward bounce and the opposing forwards gathered it.

Congratulations and love many thanks to Garth Mother and Phyl