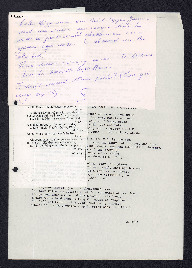 Document with poems attached over long poem by W King. Note that he was 'our' mid-upper gunner but did not realise he was a poet. Note and poems pinned over the same main text which is can be read on final page. First partial poem about aircrew not returning. Second entitles 'The Raid' with part of the first poem repeated underneath. Third entitled 'bombs away' which appears to be the complete poem of which parts appear above. Final page has full seven verse poem entitled 'Just a day on 102'. About going on operations.

Willie King was our Mid Upper Gunner and we were unaware that he was a poet until at a Reunion some years ago when he showed us the attached.

'There were many more' he told us – but he hadn't kept them.

THE RAID
At sixteen thousand feet seemingly all alone,
Comforted only by the engines steady drone;
Eyes alert, guns and turret swinging,
Over the inter-com my voice ringing;
"Fighter" Port Quarter up corkscrew "Go".
[inserted] Heart [/inserted] pumping, blood thumping, nerves jumping.
This is it, a JU88, that's the foe;
"Get him," I hear the Skipper shout,
It's hard to reply with your heart in your mouth.
Dive seven hundred feet, still he comes
Into the teeth of eight blazing guns.
The tracer, the incendiary, all seem to hit.
By this time he must be shot to bits.
Roll and climb, fire point blank,
A tongue of flame, a crimson glow –
The bullets have found a petrol tank.
A feeling of joy, then of relief, a pang of regret,
A brave man's just gone to his death.
Attack broken. Resume course, "Go".

The dark sky was adorned by thousands of stars.
The cold light of the moon lit the bomber's patch.
Inside, seven men all highly trained,
In peak condition but nerves tightly strained;
Carrying out their tasks, keeping everything trim.
Each knew the other's life depended on him.
Press on to the target, there's trouble ahead,
All to be faced ere we get to bed.
Fighters, searchlights, flak thick as a mat,
To fly into that you must be daft as a bat.
Bomb doors open, fly straight and level,
Into the teeth of the shot and the shell.
It appears we're flying straight into hell;
Left, left, steady – bombs away!
Doors closed, nose down, let's head for our shore,
Surely the enemy can't take much more.
A last look at the holocaust exploding below,
A strange feeling of pity for people slain,
Yet knowing full well we'll return again.
Then in the Mess, a treat – "Bacon and eggs".
A glance around at the empty chairs,
Where's Jack, Freddy, Dusty, Dixie and Pete?
Along with others, they won't be back to eat.
All young lads laughing gay and carefree,
In love with life they enjoyed each day,
But in bombing cities that's the price we pay.

There's Ops on tonight, so down at the Flight
it hums like a bee hive teeming with life.
There are Pilots, Engineers, Navigators & W.O.Ps
Bomb Aimers, Gunners, Bombing-up Crews, each doing their bit,
ensuring for the mission with others "E" for Easy is fit.

Bryan the Nav. Bob the B.A., Eric the W.O.P., Engineer Ron.
The only Combatants (or Ballast) Gunners Young Will and Tom.
Each from his position reported, "Equipment O.K. Skip".
Bill replied "Re-check laddies, might be a long trip".
He had learned the hard way, one night over France:
Double check on the ground; leave nothing to chance

Then a race to the Mess Hall like a bunch of starved boys.
The tin roof resounded, the laughter and noise.
At Jackson's Crew table they were quite out of hand.
Laughing about an engine falling off as they came into land?
Not really, the merriment was about Jacko that night.
After debriefing he knocked out two teeth falling off his bike.

To impress freshers, the lineshoots of experienced crew
would make your hair curl, but they were mainly untrue.
Then back to the billets for a couple of hours break,
some to write letters, some to spin "Put and Take";
A few to bind about a lost evening with a pretty W.A.A.F.
Only those nearing a tour's end found it difficult to laugh.

Then kitted up ready for briefing, the C.O. by the map.
Target Berlin! Pointing out en route the danger of fighters and flak.
The Met had their say about weather conditions and cloud still clearing.
An uncertain smile at the hoots and the jeering.
Not always wrong but they were very seldom right.
Briefing over, on to the crew bus down to the Flight.

Sprawling at ease by the side of "E" Easy, our plane:
A strong bond of togetherness yet each man's feelings his own.
The banter was gone, the mood had a more serious tone.
Although the gunners would attempt some practical joke.
Till the Skip said "Right Lads, it's time.
Mount Up, Let's put on the Yoke".

The engines opened up with a thunderous roar.
"E" Easy rolled majestically out for the start of her chore.
The ground crew gave a nod and a wave of the hand.
Theirs was a hard task waiting for hours in suspense.
But Jeff the fitter, with eyes unnaturally bright,
yelled "Don't do anything stupid, bring back that kite".