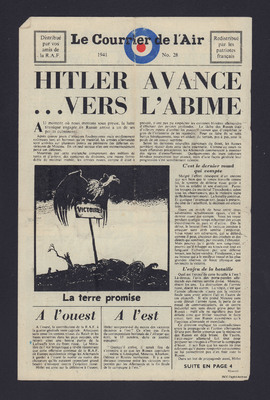 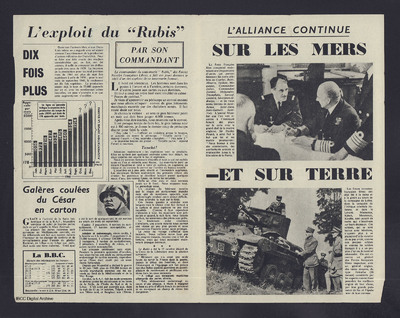 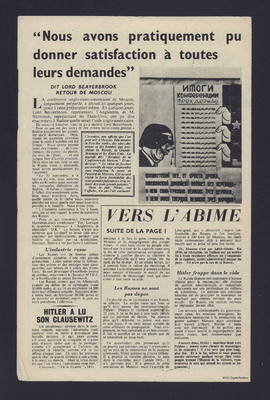 Describes how German army’s progression around Moscow is not as rapid or complete as indicated by propaganda from Berlin. They are meeting tenacious defence from Russia, preventing the German infantry from joining the Panzer Divisions. Suggests Germany needs to take Moscow and destroy Russian army for victory. Russia’s huge space provides much flexibility. Cartoon of ‘promised land’ with Nazi eagle perched on victory sign and ravaged earth below. RAF in west keeping over half of the Luftwaffe fighters from the Russian front. Berlin correspondent of L’Alcazar on 15th October doubts Russians would capitulate even with the loss of major cities.

Huge increases in military aircraft production in United States, with ten times more output in September 1941. Free French Naval Forces commander of ‘Rubis’ submarine describes how it torpedoes a 4,000 ton merchant ship and suffers damage from depth charges. It surfaces the following day and re-joins its base. The Rubis is made a companion of the Ordre de la Libération on 15th October for its wartime service for France and crossing a minefield during an attack despite being damaged. Mussolini suffering heavy ship losses because of British navy and RAF in Mediterranean.

Free French Fleet has about 50 ships. Photograph of Admiral Muselier and Sir Dudley Pound, Admiral of the Fleet. Photograph of a general from Free French forces, together with an English general, inspecting 16-ton Valentine medium tanks said to be the best of their type.

Describes preparations and outcome of Anglo-Russian-American conference in Moscow at which a package of aid for Russia was agreed. Lord Beaverbrook representing England and W. Averell Harriman the United States. Russian arms production capacity and aircraft (MIG3 and Stormovik dive bomber) praised. Poster showing results of Moscow conference. Quotation from Clausewitz’s ‘On War’ 1833, suggesting Hitler is acting as though victorious as his opponent is too strong.