Life as a prisoner of war 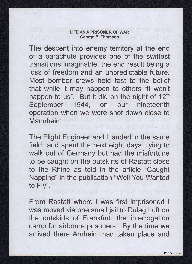 Life as a prisoner of war

After baling out on 12 September 1944 and evading with the flight engineer for 8 days was captured. Describes move to Dulag Luft and journey to Stalag Luft VII. Gives detailed description of camp and activities. At the end quotes some extracts from his diary to illustrate activities. Concludes with stories of lack of food, Christmas and evacuation of camp in face of advancing Russians in January 1945.

The descent into enemy territory at the end of a parachute provides one of the swiftest transitions imaginable, the end result being a loss of freedom and an unpredictable future. Most bomber crews hold fast to the belief that while it may happen to others "it won't happen to us". But it did on the night of 12th September 1944, on our nineteenth operation when we were shot down close to Mannheim.

The Flight Engineer and I landed in the same field and spent the next eight days trying to walk out of Germany but had the misfortune to be caught on the outskirts of Rastatt close to the Rhine as told in the article "Caught Napping" in the publication "Well You Wanted to Fly".

From Rastatt where I was first imprisoned I was moved via one small jail to Dulag Luft on the outskirts of Frankfurt, the interrogation camp for airborne prisoners. By the time we arrived there Arnheim had taken place and

there were large intakes of prisoners, both Air Force and Army, the latter being mainly Glider Pilots, with the result that we were only kept there three days. We were moved in to a communal block where we met up with our Bomb Aimer and Wireless Operator who had been told that we were dead.

We were then put on board a corridor train, six to a compartment, and were each issued with a Red Cross parcel – the guards had received a loaf of bread and sausage for the trip which took about five days before arriving at our Prison Camp, Stalag Luft VII which in the wisdom of the Germans had been built in Selesia more or less in the centre of the Eastern Front.

The Camp was only opened on 6th June 1944 and even when we arrived it was still a temporary camp, the accommodation being in wooden kennel type huts, each sleeping six or seven men, the main compound being built in an adjoining area.

There were a few Army personnel in the camp, mainly Glider Pilots takern[sic] at Arnheim, and the Germans decided to make them help with the construction of the new huts in the neeighbouring [sic] compound. A different group, dressed in the Army uniforms went out the next day and skilfully undid most of the work of the previous day, the end result being that no further prisoners were made to work on the site. addition we gained some of the tools provided by the Germans.

Some of the POW's had been moved from other camps and one group brought with them their radio set; the Germans knew they had it but were never able to find it, so we got regular news bulletins from home.

We moved to the new camp in the adjoining compound on 16th October. It comprised eight blocks, each of 14 rooms with twelve to a room, and this time we had beds, albeit two-teired [sic] bunks, a table some chairs and a stove. Other blocks accommodated the kitchen, ablutions, and a theatre-cum-

A sixteen foot barbed-wire fence surrounded the compound, inside which was a trip-wire some six feet from the outer fence and if you crossed that you were likely to be shot from the guard towers surrounding the compound. Indeed, one POW was shot attempting to scale the outer fence. A second was shot during an air-raid while trying to get to the kitchen to collect the rations for the bloc; the all-clear had sounded in the nearby village but not in the camp which gave rise to the guard shooting the POW who died the next day.

So, how did we pass our time? Walking the perimeter, playing football, rugby and other sports; playing cards, a home-made Monopoly Set etc. There were two parades, morning and evening, when we were counted, and some amusement was created by filling the blank files, thus giving the Germans a count of more prisoners than there should have been. "Goons" were always in the camp and at night dogs were

let in to the compound.

We had a library stocked by the International Cross who also supplied instruments for the formation of two orchestras, one semi-classical and the other an accordion band. At Christmas we had concerts on two consecutive nights and at the close of the second night the German Commandant stood up andf [sic] saidf [sic] we may not sing our National Anthem. The Senior British Officer, Peter Thomson, rose to his feet and simply said "Land of Hope and Glory boys" which we sang with great gusto, two or three times to the utter dismay of the Germans.

A Canadian group asked for skates and these were supplied by the IRCC, then they asked the Germans for permission to build an ice-rink; this was duly given and work began on a vacant site between two accommodation blocks. What the Germans didn't know was that the sandy soil being built up around the rink also contained sand

from a tunnel being dug from one of the huts. However the tunnel was eventually discovered. However, it would never have been used as instructions had been given that there were to be no more escapes.

Other activities and best be illustrated by quoting some extracts from my diary:-

18th November – a meeting held for the foundation of a St. Andrew's Society.

Food was always a topic of conversation and at a later meeting of the Society I found myself talking to a nephew of my Father's cousin who owned "The Old Thorn Tree" bakehouse and tearoom which once stood outside Queen Street Station in Glasgow.

2nd December – Scotland v England rugby match ended no score, and the following day the United Kingsdom [sic] lost to the Dominions by a single score.

15th December – snowing heavily. Showing of "Life Begins with Andy Hardy" and at night a musical evening at the St Andrew;s Society.

The approach of winter brought freezing weather. Rations were getting short as Red Cross parcels were not getting through and the German rations were quite inadequate. A sixth of a loaf of bread, some watery soup and a few potatoes each day. We were also aware of the Russian push from the East and around Christmas were put on notice that the camp would be evacuated.

However, Christmas did happen and on Christmas eve we had a carol service; the following day there was a parade at 8 a.m. but the rest of the day was free. Our room's menu for the day was – breakfast – porridge, egg and bacon, coffee; lunch – Spam and roast potatoes, Christmas Cake and coffee; tea [sic] – corned beef, salmon, chips and tea; supper - flapjacks and jam, coffee. Never felt so full!

On the 17th of January we were given one hour to be ready to move but it was the 19th before we moved. Meantime stores had been opened to all and we packed as much as we could. We left at 5 a.m. and the account of the Long March is given on separate pages.

[italics] My record of rations received during the twenty-one days were – 3 loaves of bread, 4 packets of Kracke-Werke (like Rye-Vita) 1 bag of small biscuits, 6 cups of soup, 4 cups of porridge and 1 cup of barley. [/italics]