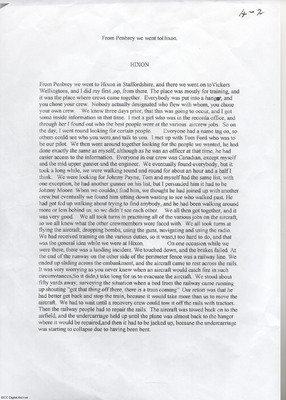 Posted for training on Wellingtons. Describes crewing up process and other events while training including a brake failure on landing and ending up on railway line outside the airfield boundary.

From Penbrey we went to Hixon.
HIXON
From Penbrey we went to Hixon in Staffordshire, and there we went on to Vickers Wellingtons. and I did my first .op, from there. The place was mostly tor training, and it was the place where crews came together. Everybody was put into a hangar, and you chose your crew Nobody actually designated who flew with whom, you chose your own crew. We knew three days prior, that this was going to occur, and I got some inside information in that time. I met a girl who was in the records office, and through her I found out who the best people were at the various aircrew jobs. So, on the day, I went round looking for certain people. Everyone had a name tag on, so others could see who you were, and talk to you. I met up with Tom Ford who was to be our pilot. We then went around together looking for the people we wanted, he had done exactly the same as myself, although as he was an officer at that time, he had easier access to the information. Everyone in our crew was Canadian, except myself and the mid upper gunner and the engineer. We eventually found everybody, but it took a long while, we were walking round and round for about an hour and a half I
think. We were looking for Johnny Payne, Tom and myself had the same list, with
one exception, he had another gunner on his list, but I persuaded him it had to be Johnny Moore. When we couldn’t find him, we thought he had joined up with another crew. But eventually we found him sitting down waiting to see who walked past. He had got fed up walking about trying to find anybody, and he had been walking around more or less behind us, so we didn't see each other. We all then got together, and it was very good. We all took turns in practising all of the various jobs on the aircraft, so we all knew what the other crewmembers were faced with. We all took turns at flying the aircraft, dropping bombs, using the guns, navigating and using the radio.

We had received training on the various duties, so it wasn,t too hard to do, and that was the general idea while we were at Hixon. On one occasion while we
were there, there was a landing incident. We touched down, and the brakes failed. At
the end of the runway on the other side of the perimeter fence was a railway line. We ended up sliding across the embankment, and the aircraft came to rest across the rails. It was very worrying as you never knew when an aircraft would catch fire in such circumstances, so it didn’t take long for us to evacuate the aircraft. We stood about fifty yards away, surveying the situation when a bod from the railway came running up shouting "get that thing off there, there is a train coming" OUT retort was that he had better get back and stop the train, because it would take more than us to move the aircraft. We had to wait until a recovery crew could tow it off the rails with tractors. Then the railway people had to repair the rails. The aircraft was towed back on to the airfield, and the undercarriage held up until the plane was almost back to the hanger where it would be repaired, and then it had to be jacked up, because the undercarriage
was starting to collapse due to having been bent.