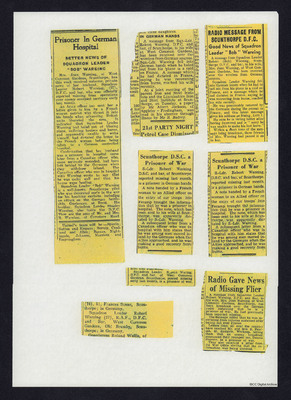 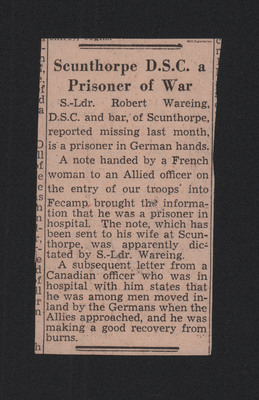 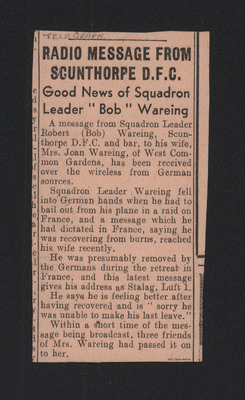 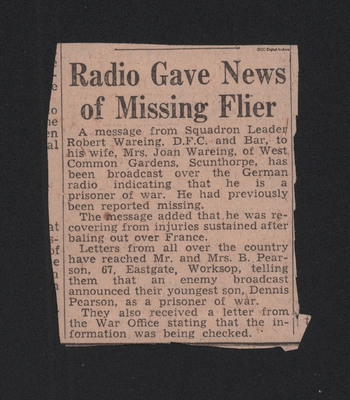 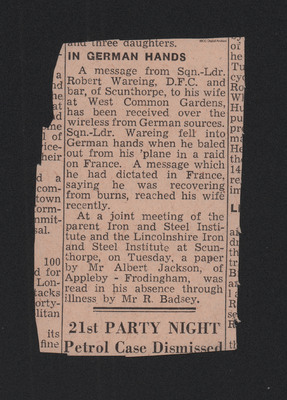 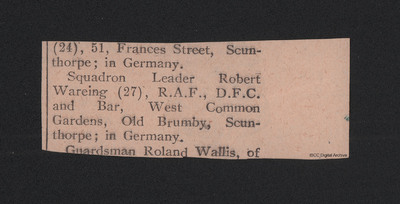 Prisoner in German Hospital
BETTER NEWS OF SQUADRON LEADER “BOB” WAREING
Mrs. Joan Wareing, of West Common Gardens, Scunthorpe, has this week received welcome, private news of her husband, Squadron Leader Robert Wareing, (27), D.F.C. and bar, who was officially reported missing from operations over occupied territory early last month.
An Army officer has sent her a letter given to him by a French woman patriot who thrust it into his hands when advancing British units liberated the area. It indicated that Squadron Leader Wareing had baled out of blazing plane, suffering bruises and burns, and apparently unable to write himself, had dictated the letter to the French woman before being taken to a German controlled hospital.
Confirmation that her husband was a prisoner in hospital came later from a Canadian officer who, more seriously wounded, had been left behind by the Germans when they withdrew inland. The Canadian officer who was in hospital with Wareing wrote to say that he was quite well and that his burns were healing.
Squadron Leader “Bob” Wareing is a well-known Scunthorpe pilot who was decorated early in the war for his bombing exploits, including an attack on the German battleship Gneisenau, at Brest. His brother, Squadron Leader Stanley Wareing, also holds the D.F.C. They are the sons of Mr. and Mrs. R. Wareing, of Cemetery Road

IN GERMAN HANDS
A message from Sqn.-Ldr. Robert Wareing, D.F.C. and bar, of Scunthorpe, to his wife at West Common Gardens, has been received over the wireless from German sources. Sqn.-Ldr. Wareing fell into German hands when he baled out from his ‘plane in a raid on France. A message, which he had dictated in France, saying he was recovering from burns, reached his wife recently.
At a joint meeting of the parent Iron and Steel Institute and the Lincolnshire Iron and Steel Institute at Scunthorpe, on Tuesday, a paper by Mr Albert Jackson, of Appleby – Frodingham, was read in his absence through illness by Mr R. Badsey.

[Inserted] TELEGRAPH. [/inserted]
RADIO MESSAGE FROM SCUNTHORPE D.F.C.
Good News of Squadron Leader “Bob” Wareing
A message from Squadron Leader Robert (Bob) Wareing, Scunthorpe D.F.C. and bar, to his wife, Mrs. Joan Wareing, of West Common Gardens, has been received over the wireless from German sources.
Squadron Leader Wareing fell into German hands when he had to bale out from his plane in a raid on France, and a message which he had dictated in France, saying he was recovering from burns, reached his wife recently.
He was presumably removed by the Germans during the retreat in France, and this latest message gave his address as Stalag, Luft 1.
He says he is feeling better after having recovered and is “sorry he was unable to make his last leave.”
Within a short time of the message being broadcast, three friends of Mrs. Wareing had passed it on to her.

Scunthorpe D.S.C. a Prisoner of War
S.-Ldr. Robert Wareing, D.S.C. and bar, of Scunthorpe, reported missing last month, is a prisoner in German hands.
A note handed by a French woman to an Allied officer on the entry of our troops into Fecamp brought the information that he was a prisoner in hospital. The note, which has been sent to his wife at Scunthorpe, was apparently dictated by S.-Ldr. Wareing.
A subsequent letter from a Canadian officer who was in hospital with his states that he was among men moved inland by the Germans when the Allies approached, and he was making a good recovery from burns.
[above cutting included twice]

Radio Gave News of Missing Flier
A message from Squadron Leader Robert Wareing, D.F.C. and Bar, to his wife, Mrs. Joan Wareing, of West Common Gardens, Scunthorpe, has been broadcast over the German radio indicating that he is a prisoner of war. He had previously been reported missing.
The message added that he was recovering from injuries sustained after baling out over France.
Letters from all over the country have reached Mr. and Mrs. B. Pearson, 67, Eastgate, Worksop, telling them that an enemy broadcast announced their youngest son, Dennis Pearson, as a prisoner of war.
They also received a letter from the War Office stating that the information was being checked.

bale out; Distinguished Flying Cross; prisoner of war; shot down