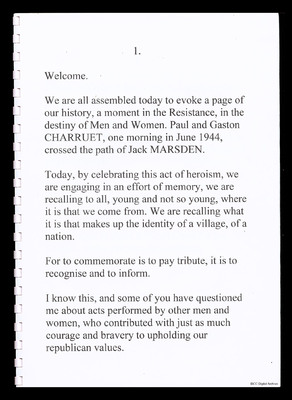 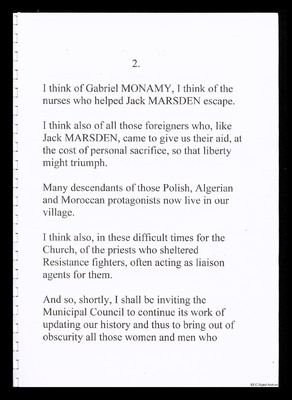 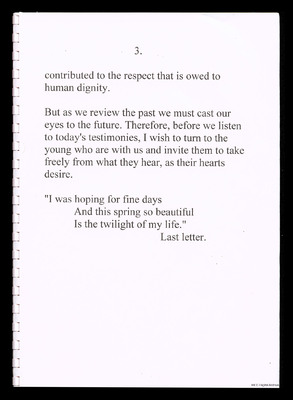 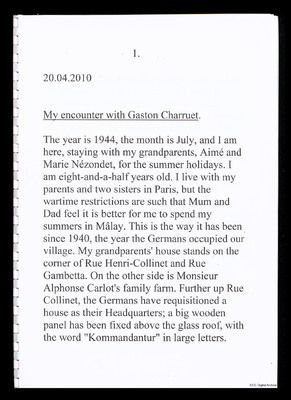 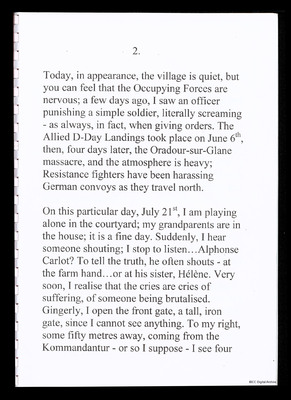 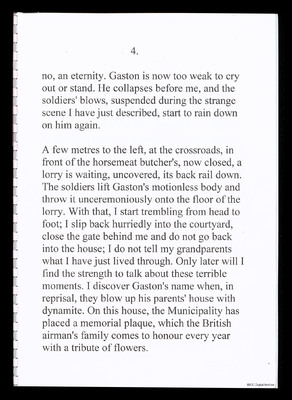 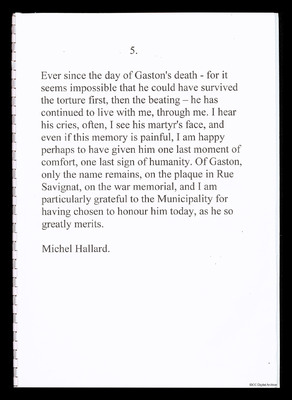 A celebration of an act of heroism involving Jack Marsden, Paul and Gaston Charruet. An introduction to the story of Jack Marsden's escape. The second part is a history of the events by Michel Hallard. She describes the screams of Gaston Charruet and his death. [page 3 of her account is missing]

1.
Welcome.
We are all assembled today to evoke a page of our history, a moment in the Resistance, in the destiny of Men and Women. Paul and Gaston CHARRUET, one morning in June 1944, crossed the path of Jack MARSDEN.
Today, by celebrating this act of heroism, we are engaging in an effort of memory, we are recalling to all, young and not so young, where it is that we come from. We are recalling what it is that makes up the identity of a village, of a
nation. .
For to commemorate is to pay tribute, it.is to recognise and to inform. I know this, and some of you have questioned me about acts performed by other men and women, who contributed with just as much courage and bravery to upholding our republican values.
[page break]

2.
I think of Gabriel MONAMY, I think of the nurses who helped JackMARSDEN escape. I think also of all those foreigners who, like Jack MARSDEN, came to give us their aid, at the cost of personal sacrifice, so that liberty might triumph.
Many descendants of those Polish, Algerian and Moroccan protagonists now live in our village.
I think also, in these difficult times for the Church, of the priests who sheltered Resistance fighters, often acting as liaison agents for them.
And so, shortly, I shall be inviting the Municipal Council to continue its work of updating our history and thus to bring out of obscurity all those women and men who

3.
contributed to the respect that is owed to human dignity.
But as we review the past we must cast our eyes to the future. Therefore, before we listen to today's testimonies, I wish to turn to the young who are with us and invite them to take freely from what they hear, as their hearts desire.
If I was hoping for fine days
And this spring so beautiful
Is the twilight of my life.
Last letter.


[page break]
1.
20.04.2010
My encounter with Gaston Charruet.
The year is 1944, the month is July, and I am here, staying with my grandparents, Aime and Marie Nezondet, for the summer holidays. I am eight-and-a-half years old. I live with my parents and two sisters in Paris, but the wartime restrictions are such that Mum and Dad feel it is better for me to spend my summers in Malay, This is the way it has been, since 1940, the year the Germans occupied our
village. My grandparents' house stands on the corner of Rue Henri-Collinet and Rue Gambetta. On the other side is Monsieur Alphonse Carlot's family farm. Further up Rue Collinet, the Germans have requisitioned a house as their Headquarters; a big wooden panel has been fixed above the glass roof, with
the word "Kommandantur" in large letters.


[page break]
2.
Today, in appearance, the village is quiet, but you can feel that the Occupying Forces are nervous; a few days ago, I saw an officer punishing a simple soldier, literally screaming - as always, in fact, when giving orders. The Allied D-Day Landings took place on June 6th, then, four days later, the Oradour-sur-Glane
massacre, and the atmosphere is heavy; Resistance fighters have been harassing
Gennan convoys as they travel north.
On this particular day, July 21 S\ I am playing alone in the courtyard; my grandparents are in , the house; it is a fine day. Suddenly, I hear someone shouting; I stop to listen ... Alphonse Carlot? To tell the truth, he often shouts ... at
the farm hand ... or at his sister, Helene. Very soon, I realise that the cries are cries of suffering, of someone being brutalised. Gingerly, I open the front gate, a tall, iron gate, since 1 cannot see anything. To my right, some fifty metres away, coming from the Kommandantur - or so I suppose - I see four

4.
no, an eternity. Gaston is now too weak to cry out or stand. He collapses before me, and the soldiers' blows, suspended during the strange scene I have just described, start to rain down on him again.
A few metres to the left, at the crossroads, in front of the horsemeat butcher's, now closed, a lorry is waiting, uncovered, its back rail down. The soldiers lift Gaston's motionless body and throw it unceremoniously onto the floor of the
lorry. With that, I start trembling from head to foot; I slip back hurriedly into the courtyard, close the gate behind me and do not go back into the house; I do not tell my grandparents what I have just lived through. Only later will I find the strength to talk about these terrible moments, I discover Gaston's name when, in
reprisal, they blow up his parents' house with dynamite. On this house, the Municipality has placed a memorial plaque, which the British airman's family comes to honour every year with a tribute of flowers.


[page break]
5.
Ever since the day of Gaston's death - for it seems impossible that he could have survived the torture first, then the beating - he has continued to live with me, through me. I hear his cries, often, I see his martyr's face, and even if this memory is painful, I am happy perhaps to have given him one last moment of
comfort, one last sign of humanity. Of Gaston, only the name remains, on the plaque in Rue Savignat, on the war memorial, and I am particularly grateful to the Municipality for having chosen to honour him today, as he so greatly merits.
Michel Hallard.