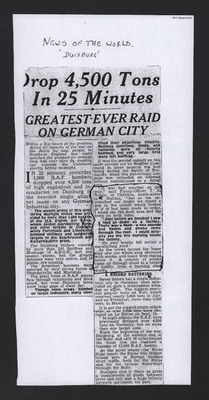 A newspaper cutting of a 1000 bomber attack on Duisburg. The cutting quotes Flying Officer Nopon, a bomb aimer on a Halifax.

News of the World

Within a few hours of the greatest Allied air assaults of the war on the Reich by day, people in Southern England last night watched the greatest air armada they had ever seen fly steadily out towards the Continent shortly before midnight.

IN 25 minutes yesterday 1,000 R.A.F. bombers dropped over 4,500 tons of high explosives and incendiaries on Duisburg in the heaviest single attack yet made on any German industrial city.

The second prong of this shattering daylight attack was provided by more than 1,000 heavies of the U.S. Eighth Air Force, which raided marshalling yards and other targets at Cologne, while Fortresses and Liberators bombed military and industrial targets in the Saarbrucken and Kaiserslautern areas.

The Duisburg raiders, covered by more than 300 Spitfires and Mustangs of A.D.G.B., met few enemy planes, but the ground defences were very active, and 14 planes are missing.
The American bombers were escorted by very strong forces of Thunderbolts and Mustangs.
The great force of R.A.F. planes flew through rainstorms and thick cloud, but over Duisburg there were large gaps of clear sky.

Though some crews bombed on target indicators, many identified their objectives visually. Railway junctions, docks, and factories were all heavily bombed, and very large fires were left burning.

It was the second assault on this scale carried out by Bomber Command in three months, the first being during the Battle of Normandy, when this pulverising tonnage was unloaded on German armour concentrated in a forest area.
[boxed] “It was bad weather on the way,” said Flying-Officer T.B. Nopon, of Charlton, bomb-aimer in a Halifax, “but as we approached our target we found a gap in the clouds which looked as if it had been made to order. I could see the dock area and the town on both sides.

“Just before we bombed I saw a load go down on a factory. There was a flash – a fire started and flames and smoke came through the roof. I could actually see the fire burning inside the factory.

“My own bombs fell across a marshalling yard.”
As the crews turned for home they saw the whole area obscured with smoke, and many fires raging below it. A column of smoke came up through cloud to a height of 5,000ft. from a burning steel works. [/boxed]

A RECORD BATTERING
Never before has a single industrial city in Germany been saturated on such a tremendous scale, day or night. The biggest previous attacks were on Kiel, which received nearly 3,000 tons in July, and on Frankfurt, more than 3,000 tons, in March.
It is not the biggest single attack ever, as over 5,000 tons were cascaded on Le Havre on Sept. 10.
In night attacks the R.A.F. have previously dropped over 4,500 tons on Germany, but on more than one target area.
Since the beginning of the war, Duisburg, at the western end of the Ruhr, and only 35 miles behind the front line, has received a tonnage of 12,500 R.A.F. bombs.
At the point where the River Ruhr meets the Rhine this largest inland port in Europe handles river traffic, both for the Rhine and for the various waterways through the Ruhr.
Nowhere else is there so great a transference of goods between river and rail, and a huge railway network surrounds the port.