49 items. An oral history interview with Henry Albert James Pollock (b. 1924, 2220546, 187029 Royal Air Force) his log book, documents and photographs. Henry Pollock completed 36 operations as a rear gunner with 78 squadron from RAF Breighton. After the war, he served in the Far East.

The collection has been donated to the IBCC Digital Archive by Henry Albert James Pollock and catalogued by Barry Hunter. 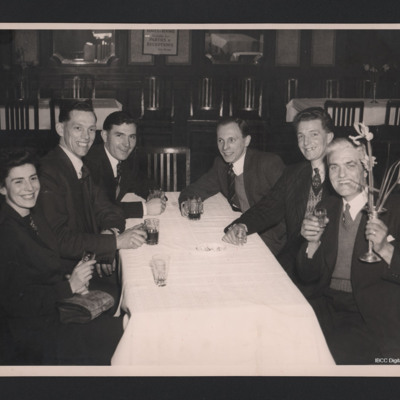 Five men and one woman at a reunion. They are sitting at a table. One man is holding up a vase of flowers. On the reverse -
'L - R
2 9 Alan Wilmer
3 Mr Polloc [sic]
4 B/A Tommy Noton
W/Op Daniels
F/E Stan Knight'
The reverse is stamped…

Henry Pollock with 20 Men and One Woman 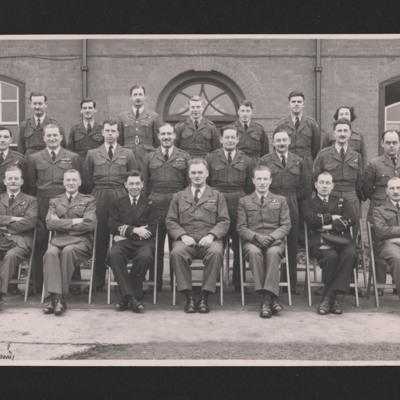 A mixed group of airmen, two naval officers, soldiers and one woman arranged in three rows outside a building. Henry is second row on far left. On the reverse 'Shawbury 56'. 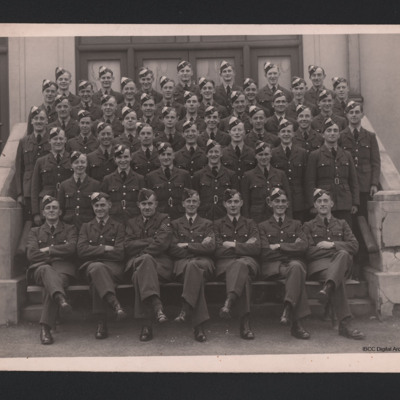 50 trainee airmen and instructors arranged on the steps at Regents Park. On the reverse 'see folder. Regents Park Aug. 43'. 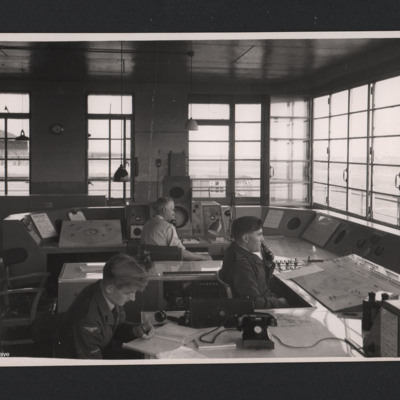 Two photographs of the inside of the control tower at North Luffenham.
Photo 1 has three airmen working with Henry holding a phone. On the reverse is 'N Luff'.
Photo 2 has Henry on a telephone with a second behind. On the reverse '1950s N.…

Servant outside a House 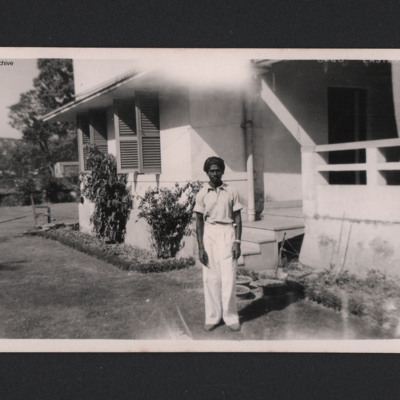 A servant standing outside a house. On the reverse is 'Tony Mr Pollock's Bearer ? Dah Nang'. 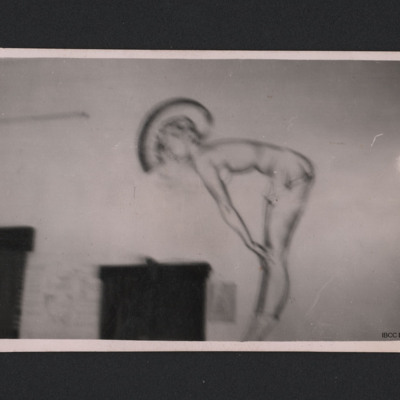 A drawing on a wall of a naked woman wearing a hat. On the reverse is 'Calcutta'. 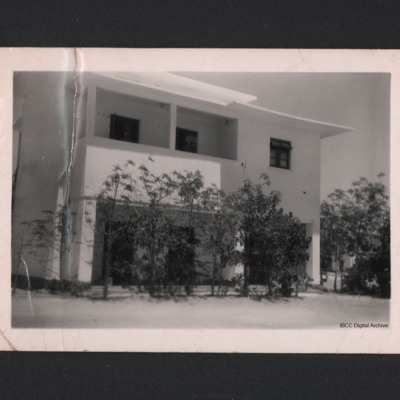 On the reverse is 'Aden'. 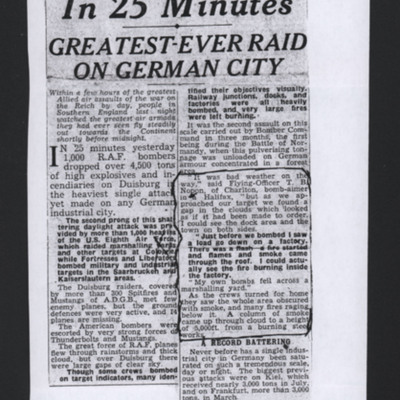 A newspaper cutting of a 1000 bomber attack on Duisburg. The cutting quotes Flying Officer Nopon, a bomb aimer on a Halifax. 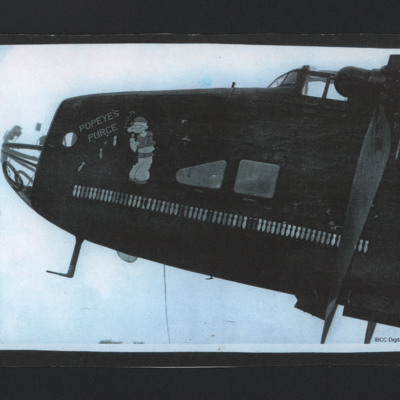 The nose of a Halifax showing over 60 operations. There is a Popeye cartoon and 'Popeye's Purge' painted on. 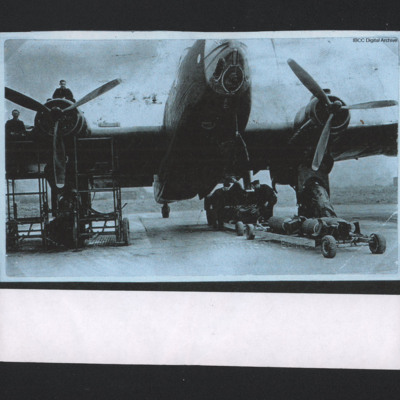 A front view of a Halifax being loaded with bombs. Two ground crew are working on the starboard inner engine. 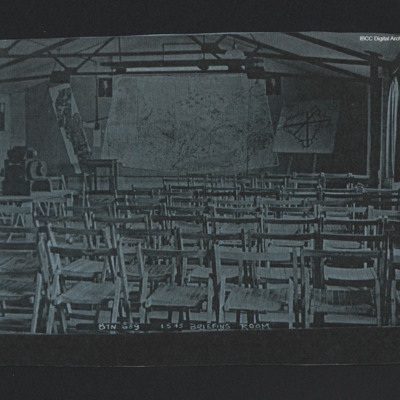 The briefing room at Breighton, decked with collapsible chairs. On the wall is a map of the UK extending to Germany. The image is annotated 'BTN G89 I.545 Briefing Room'. 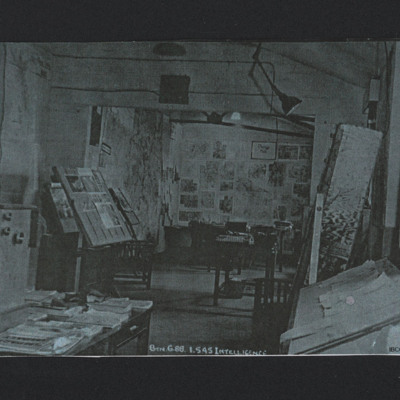 A view of the Intelligence Room at Breighton. There are boards covered in aerial photographs and maps. The image is annotated 'BTN G.88 I.545 Intelligence'. 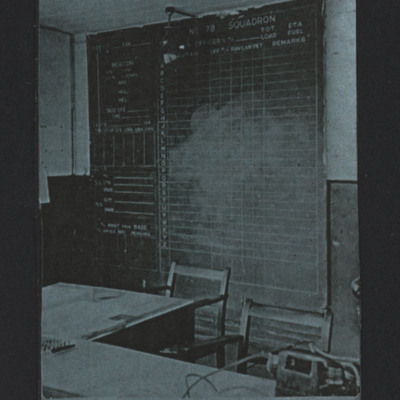 A view of the Operations room at Breighton. In the foreground is a table with a phone and on the wall is a board for aircraft operations, 78 Squadron. 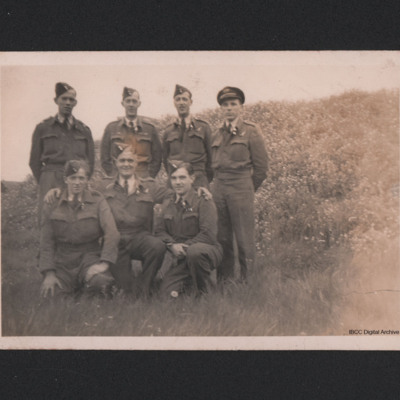 Two similar images of seven airmen grouped together. In the background is a large bush. On the reverse of the first photo is a handwritten comment which is not decipherable. 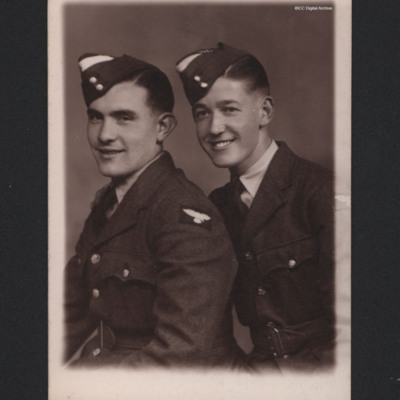 A half-length portrait of two airmen with trainee flashes on their caps. 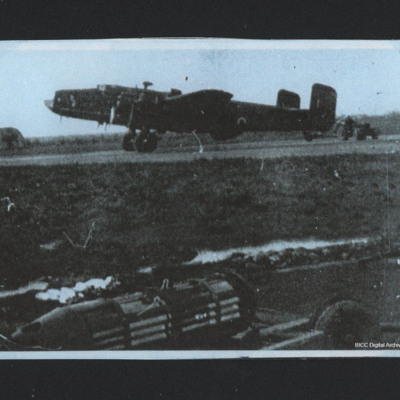 A Halifax and a tractor. In the foreground is a bomb trolley. 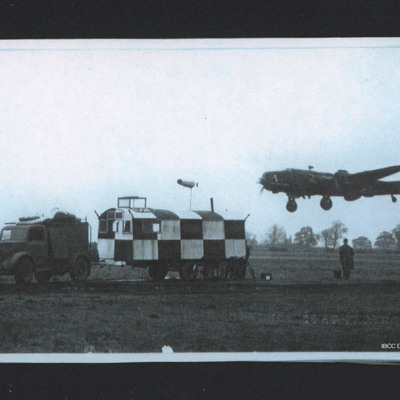 A Halifax about to touch down, watched by a single airman. In front is a red and white control caravan attached to a small truck. 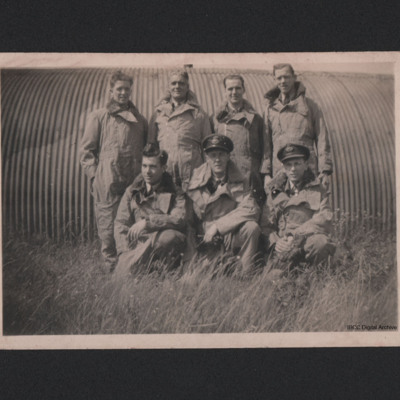 Five Airmen and their Halifax 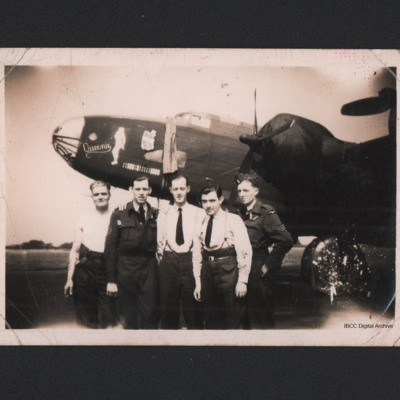 Three identical images of five airmen standing at the front of their Halifax . On its nose is 'Queenie' and about 20 operation 'bombs' painted on. 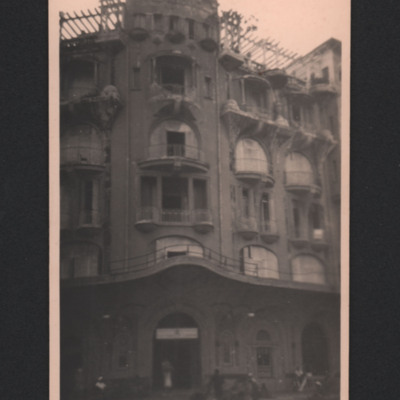 Three photographs of the Majestic Hotel in Saigon. The hotel was used by RAF Transport Command. On the reverse of photo 3 is 'Majestic H Saigon'. 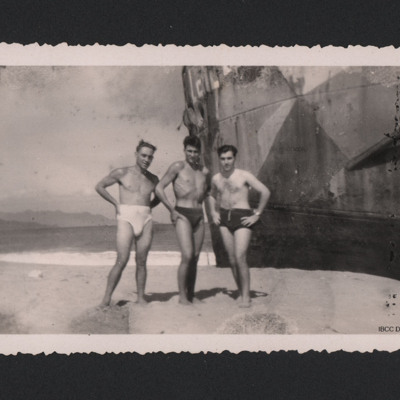 Two photographs of three men posing in swimming trunks. Behind is a ship.
On the reverse of photo 1 is 'S French liason [sic] officer'.

Crowd waiting for a Parade at Saigon 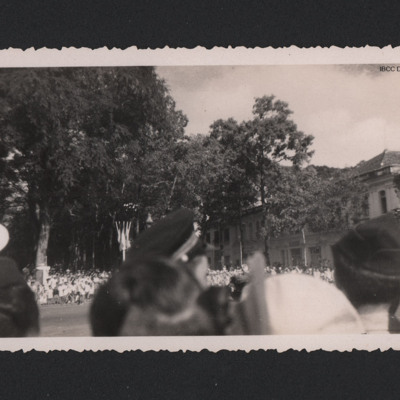 Two photographs of a crowd waiting for a parade. On the reverse of the second is 'S' 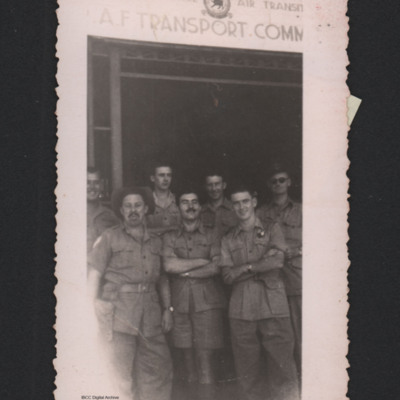 Seven men in khaki standing at the entrance to RAF Transport Command Air Transit Centre, Saigon. On the reverse 'Saigon'.

Henry Pollock at his Desk 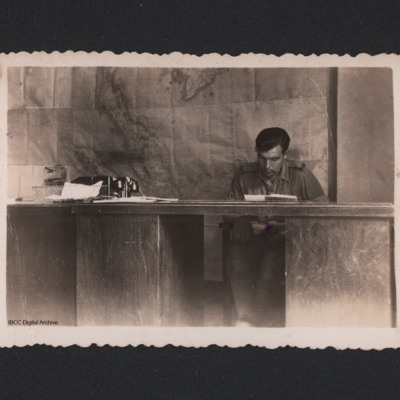 Henry sitting at his desk. Behind is a map with a route from Saigon to Kelantang and Singapore marked on. 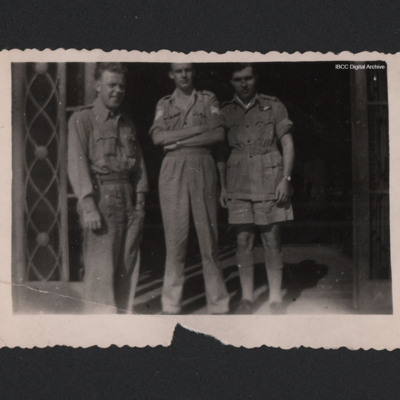