RAF shows the North its Secrets 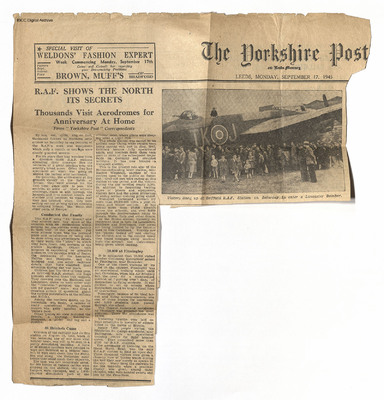 RAF shows the North its Secrets

A newspaper cutting with news of the RAF 'At Home' days.

R.A.F. SHOWS THE NORTH ITS SECRETS

By bus, car, cycle, and on foot, thousands flocked to Northern aerodromes on Saturday to see features of the R.A.F.’s work and equipment which only a month or two ago were closely guarded secrets.
For six years they had watched from a distance these R.A.F. stations spreading their runways like the tentacles of a giant octopus over the county’s broad acres. Often they had speculated on what was going on behind the barbed wire barricades.
On Saturday, the anniversary of the greatest victory in the Battle of Britain, they were allowed for the first time since1939 to pass the sentries, at some of them without challenge, roam at will through the hangers and into control towers, and clamber into bombers to whose roar they had listened when they were setting out not so long ago on missions to occupied France, the Ruhr, and other parts of Europe.

Conducted the Family
The R.A.F. were “At Home,” and they entered into the spirit of the occasion with an enthusiasm which ensured for the visitors every facility in their tour of the stations. For some airmen there was the personal pride and satisfaction of being able to show wives and sweethearts details of their work, the “kites” in which they have flown, and features of the station buildings. Others took pleasure in explaining to attentive audiences the valuable work of Radar, the intricacies of the Lancaster, Halifax and Mosquito, and the hundred and one other technical details that have absorbed their attention during the war years.
Children had the time of their lives. At Driffield R.A.F. station, the huge bombers attracted them like magnets. They crowded into the Halifaxes and Lancasters, spoke to each other over the “inter-com,” sampled the pilot’s and air gunners’ seats, and fired a ceaseless stream of questions about the various instruments at the officers and N.C.O.s.
Among the bombers drawn up for inspection was Rosie, a veteran of many operational flights, whose mascot was gaily painted on the ‘plane’s nose.
Other ‘planes on view included the Dakota, a Stirling, Wellington, Mosquito, a glider and tug and a Spitfire.

88 Heinkels Came
Evidence of the daylight raid on this station on August 15, 1940, when it was becoming one of the most vital bomber bases, was still to be seen in a partly demolished building. A force of 88 Heinkel bombers were detailed to wipe out Driffield as a bomber base, but 33 were shot down into the North Sea and along the Yorkshire coast before they could reach their objective.
The base was not completely saved, for 169 bombs of various calibre were dropped on the airfield, two of the hangars were damaged, and a 1,000-pounder demolished part of the officers’ mess, where pilots were sleeping after a night raid.
The whole station was moved to an airfield near Thirsk while repairs were being carried out, but in May, 1941, Driffield became fully operational again, and bombers from there took part in most of the subsequent major raids on Germany and occupied territory. It has now become a transport station.
This is the present role also of the Holme-on-Spalding Moor station, near Market Weighton, another of the centres open to the public on Saturday. Over 400 cars were parked at this station at one period, and the visitors during the day totalled nearly 2,000. In addition to inspecting varying types of ‘planes and equipment, visitors here had the added attraction of seeing normal training going ahead.
Transport Command aircraft fly more than 50,000,000 miles a year on trunk and feeder services. It has ferried more than 27,000 aircraft across the Atlantic, and over 8,000 through the Mediterranean route to Russia, Malta, Italy and other fronts.
At the Holme station, formerly an important base in turn for Lancasters, Halifaxes and Hurricanes, new crews are being trained to fly the Dakotas used in this Command. Visitors saw the ‘planes taking off and circling the airfield, and in the control tower they heard messages being received from the aircraft and instructions being given about landing.

10,000 at Finningley
It is estimated that 10,000 visited Bomber Command instructors’ school at Finningley, near Doncaster.
One of the finest stations of its kind in the country, Finningley was an operational training school until last Christmas, when the Air Ministry felt the need for a standardised method of “putting over” lines of instruction to flying students. It was decided to set up schools where instructors could be taught fixed lines of instruction.
Finningley, because of its ideal layout and living accommodation, was one of those chosen for conversion, and 2,000 students have passed through the school.
The Coastal Command aerodrome at Thornaby was probably the most popular. There the attendance was 40,000.
Yesterday wreaths were laid on local cenotaphs in memory of airmen killed in the Battle of Britain.
Nearly 7,000 people visited the Middleton St. George aerodrome, near Darlington now an operational training centre for light bomber crews. They subscribed more than £150 for R.A.F. charities.
The aerodrome at Leeming, on the Great North Road, was the only R.C.A.F. station to hold an open day. Three thousand visitors were given a close-up view of ‘planes which during the war they saw merely as specks in the sky. Many lined the runways to see the take-offs when a practical display was given, among them children, who were handed sweets and ices by the Canadians.

[photograph]
Visitors lined up at Driffield R.A.F. Station on Saturday to enter a Lancaster Bomber.