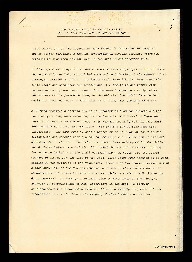 Recounts that Derrick Allen contacted a M Rudi Simon who lived in Tongess, Belgium through the Association of Veterans. M Simon was researching aircraft brought down in the local area. Derrick Allen had stated that he would like to visit the where his Lancaster crashed and he came down by parachute. M Simon and conducted research and discovered a small memorial to the crew and the location of the crash. There follows some historical scene setting of the ground situation and then an account of the last trip for Lancaster BV396 of 467 Squadron Royal Australian Air Force. The aircraft took off for Dusseldorf with 6 Australians: pilot Les Landridge, navigator Doug Baverly, bomb aimer Kiethe Woolaams, radio operator Bill Denny, on board mechanic Jack Halstead, Rear gunner Bill Leminand and one Englishman the mid-upper gunner Derrick Allen. Relates how aircraft was engaged by night-fighters and severely damaged. five of the crew managed to bail out but the rear gunner and the pilot did not escape. The aircraft exploded at 100 feet above ground scattering debris widely. Surviving crew were picked up by a United States Army anti-aircraft battery personnel who had seen aircraft on their radar but were not sure of nationality and were patrolling to find any crew. Surviving crew returned to England via Brussels.

A few months ago at the request of Rudi Simons an inhabitant of Tongres our newspaper published a request concerning an English aircraft which was supposed to have been brought down in the area on 2nd November 1944.

M. Simons, who was preparing a general work on this subject, is in contact with the Asssociation of Veterans, and had received by this channel the request of an airman, Mr. Derrick J. Allen. The latter would have liked to have found the place where his Lancaster had crashed and pay homage to his former crew members who had given their lives. Having been brought back to Spa after the success of his parachute drop, he thought that the point where he fell could not have been much further than 10 or 15kms from the town of d’Eau.

M. Simons received a certain amount of information from the readers but for the most part they were referring to the Lancaster which fell in Fagne de Berinzenne near la Petite Vecquee. This machine actually fell on 23rd 1944 and did not leave any survivors. Fortunately two letters were more encouraging. One came from M. Adelin Gueben of Le[sic] Reid, who at the time was living with his parents near a place called Vieus[sic] Pre and who saw an aircraft disintegrate in the air. The other one from a team made up of Lt. Co. Sablon and M. Louis Bedoret who had also identified the aircraft they were looking for as being linked with the small monument known as Vieux Pre, the former commune of La Reid, by the side of the road, which leads from Marteau to La Reid, passing by the memorial of the Maquisard. These last two people, besides having a good knowledge of the English language also had in their possession a lot of documents and access to certain sources. After a visit from M. Simons no doubt remained. So they gave up their time to researches in the field, to analysis of documents, and to many interviews in the area. A regular correspondence was established with Mr. Allen and finally they were able to reconstruct in all its detail the tragedy of this bomber and its crew.

2
To put it back into its historical context let us first recall the military situation at the time. The landings in Normandy had begun on 6th June 1944. Belgium had been liberated without any particularly outstanding battles in a few days at the beginning of September. Spa in particular had been liberated on 10th September 1944 by the troops of the “First USArmy”. The German forces who had abandoned Belgium without too much resistance had rallied on the Belgium/German border and supported on the Westwall (the Siegfried line) now were putting up a determined resistance. The U.S. Forces didn’t manage to get through, their communication lines were inordinately long. It was only on 28th November that the first convoy was able to unload in the port of Antwerp. A continuous front followed approximately the Belgium border and Spa and because of this found itself yet again in the zone of combat.

On 25th October General Hodges had just installed there the Head Quarters of the first army. This Army had just seized Aix-la-Chapelle and in the forest of Hurgen on the Roer was leading one of the most violent battles that the allies had ever had. The greater part of Holland were still strongly held by the forces of the Reich in particular Zelande which controlled the estuary of the l’Estaut [sic] and it was only on 9th November and with very heavy losses, just the Canadians lost 27,633 men, that the allies managed to seize the banks of the l’Escaut. No one then imagined the possibility of an aggressive return by the Germans, as it happened with the harrowing offensive of the Ardennes which started on 16th December. The objectives at the time were the Ruhr and the Sarre because the great strategists thought that the loss of the great industrial zones would very quickly put an end to the Reich.

Having set the scene lets[sic] go back to our Lancaster.

It was a heavy bomber, number DV 396 which belonged to the 467th RAAF squadron based in England at Waddington in Lincolnshire. Contrary to what the plaque on the little monument claims in good faith, this aircraft was part of the Royal Australian Air Force, so the courageous airmen who lost their lives in the Spa region came from a very long way away.

3
The inter allied High Command had actually spread its bombing missions according to the particular capacities of the fleets which they had. The day time missions to the Americans.They flew in compact formation at high altitude in quite comfortable machines with a large number of crew with a terrifying fire power in all directions, and they practiced carpet bombing, where you didn’t pick out any particular target. The night flights, much more risky, were given to the English and to the forces of their Empire. They flew at lower altitude in machines clearly less armed and uncomfortable, but the quality and the experience of their crew allied to the British tenacity and their scorn of risk allowed them to find and attack precise objectives. At the price certainly of great losses but with remarkable efficiency. When our Lancaster took off for it’s night bombing mission over Dusseldorf its crew was made up of 6 Australians, the pilot F/Officer Les Landridge, the navigator Doug Beverly, the bomb aimer Keith Woolaams, the radio operator Bill Denny, the onboard mechanic Jack Halstead. [sic] the rear gunner Bill Lemin, plus an Englishman who was mid-upper gunner Derrick Allen. Returning from his mission it was set on by German nigh[sic] fighters. A relatively slow and not very well armed machine, its chances were limited. Hit very seriously on the right rear tail fin it started to burn. An enormous hole opened between the hatch of the bomb hold and the tail. While the pilot stayed at the controls to try to bring the flaming aircraft above the allied lines, the rest of the crew gathered together on the right side between the two gaping openings. The aircraft was progressively loosing[sic] height and the pilot estimating that he had easily passed over the front line, they began to jump out. The courageous pilot still trying to control the aircraft to give a chance to his comrades.

The first to escape touched the ground on the highland of Creppe in a meadow situated not far from the road which was called the American Road. Others were scattered in the woods of Lebiolle and the last person remained hanging in the high trees situated on a small crest between the Villa du Vieux-Pre and the first bends in the road, safe and sound. He untangled himself on his own and ran across the meadow. Alas the rear gunner probably the last in the queue couldn't jump and was projected through one of the openings when the final explosion came. (Unless his parachute could not open as the height at that point was very low.) It is probably he who was found killed outright, half buried in the ground at the exact spot where today the monument stands.
[page break]

4
Many inhabitants of the region must remember having seen for a long long time the shape of his body imprinted on the earth of the Ardenne. As for the aircraft, it disintegrated before touching the ground in a great luminous explosion. The courageous pilot had finished his last mission sacrificing himself to save as many as possible of his crew. The disintegration happened at an altitude of 50-100mtrs. and the debris was scattered over a wide area, but without creating a localised crater. Some survivors were helped by the inhabitants of Creppe. Ms. Piette remembers that they prepared an enormous fricassee to build up one of them. An Australian not an Englishman.

In order to protect against aerial attack the Headquarters of the First Army 110th Battalion AA was on watch. Its gun battery, that had a still rather primitive radar and sound detector was billeted at the Villa Les Fawes. Having detected an aircraft and not knowing its nationality the Battery sent out patrols and were able to pick up fairly quickly the five survivors and take them to Spa. Amongst these was the gunner Derrick J. Allen. After questioning, medical visit and various checks he was put up for the night at the Hotel Etrangers in the rue du Marche (now the office of the Mutual). He did not have any time to stay in Spa because the following night, there he was already in Brussells, [sic] The Hotel Metropole, before flying off to England and being assigned immediately to a new crew and a new Lancaster. With this one he fortunately finished off the war.

So it was that hardly a few days after escaping a terrible death he was off again on a mission above Germany. He was just 20 years old in October 1944 and had signed on in the RAAF for the duration of the war.

Photo 1.
The crew with whom Mr. Allen finished the war with his new aircraft. He is crouched down, first row on the right.

Photo 3.
Mr. Allen at the door of his old Lancaster which came down at La Reid.

“The Pilgrimage of an English airman who in 1944 came down in the Spa region,” IBCC Digital Archive, accessed May 25, 2022, https://ibccdigitalarchive.lincoln.ac.uk/omeka/collections/document/2229.