75 items. The collection covers the career of Flight Sergeant Derrick John Allen (1880966 Royal Air Force) who was a mid-upper gunner on 467 Royal Australian Air Force Squadron at RAF Waddington in 1944-45. Collection contains his logbook, Royal Air Force documentation, notes on air gunners course and photographs of various aircrew. Collection also contains maps and photographs covering the loss of his Lancaster near Spa in Belgium from which he successfully bailed out on 2 November 1944. There is also an oral history interview with his family.

The collection has been loaned to the IBCC Digital Archive for digitisation by Judy Hodgson and catalogued by Nigel Huckins. 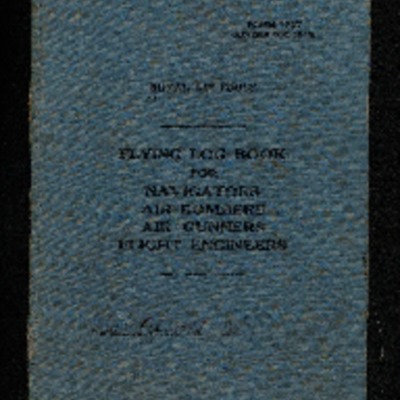 Derrick Allen was the mid-upper gunner on a Lancaster that crashed near Spa in Belgium. He had been making his way to bale out when the pilot asked him to help the rear gunner who was trapped in his turret. He managed to do this but the plane broke…

Derrick Allen with man and woman outside Buckingham Palace 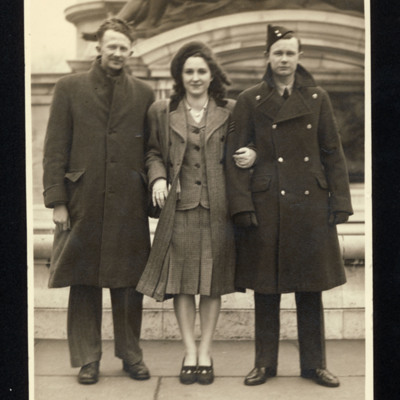 Derrick Allen on the right and a man on the left are arm in arm with a woman in the centre. Derrick is wearing greatcoat and side cap. The man and woman are in civilian clothes. In the background part of the Victoria Monument outside Buckingham…

Derrick Allen and his brother 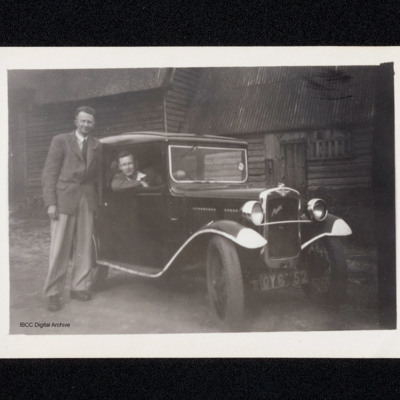 Derrick Allen is sitting in the driving seat of an Austin 12-6 car looking out of the open side window. Aubrey Allen is standing to his left. Both are wearing civilian clothes. In the background a wooden building with a thatched roof on the left… 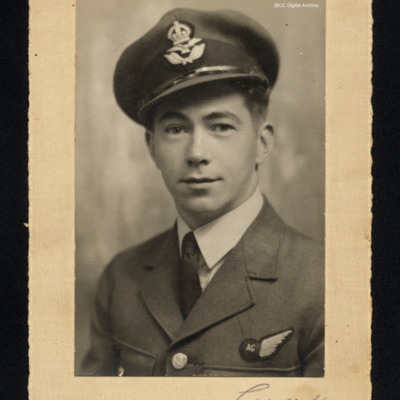 Two aircrew on a Lancaster engine 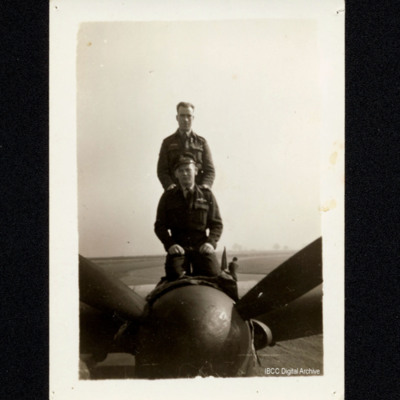 Two aircrew, one kneeling in front wearing a peaked cap, one standing behind on top of a Lancaster engine. Both are wearing battledress. Two propeller blades are visible. In the background a perimeter track and airfield. On the reverse 'F/Lt Evans,… 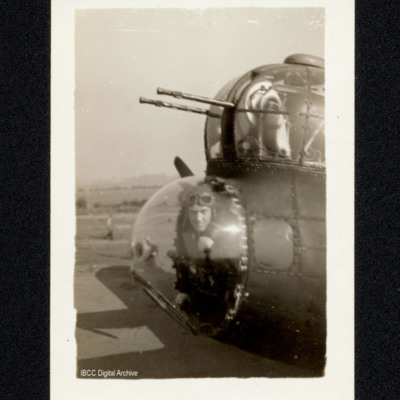 Front of a Lancaster showing front turret and bomb aimer's cupola. Aircrew wearing flying helmet and goggles in the cupola looking at camera. In the background open ground and hedges. On the reverse 'W/O Sutton Air Bomber April 1945'. 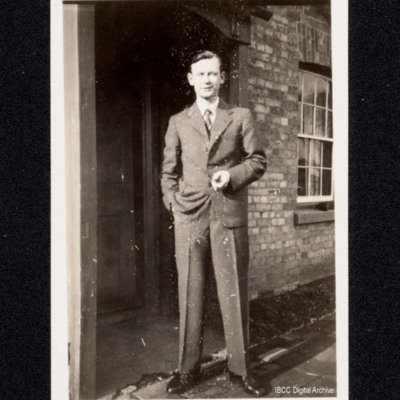 Full length portrait of Derrick Allen in suit standing with pipe in his left hand. In the background a brick building with door on the left and window on the right. On the reverse 'Derrick in his demob suit [.......]'. Second photograph same as the… 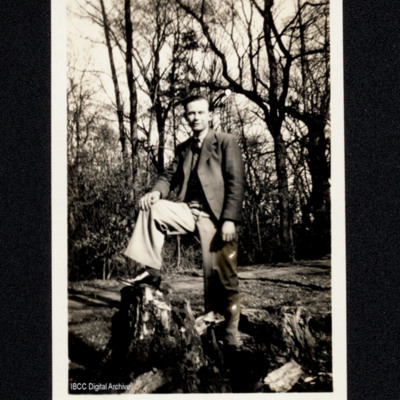 Full length portrait of Derrick Allen in civilian clothes standing with foot on tree stump. In the background trees. On the reverse 'D.J.A, 1945'. 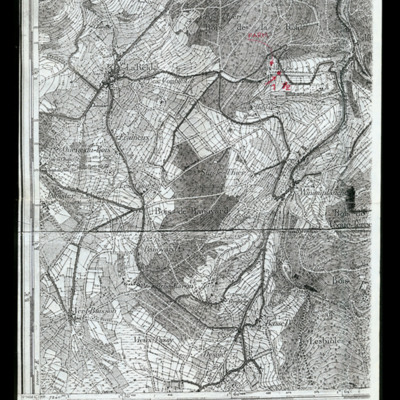 Map of the area near La Reid, Belgium annotated to show the area of the farm at Vioux Pre near to Bois de la Reid. 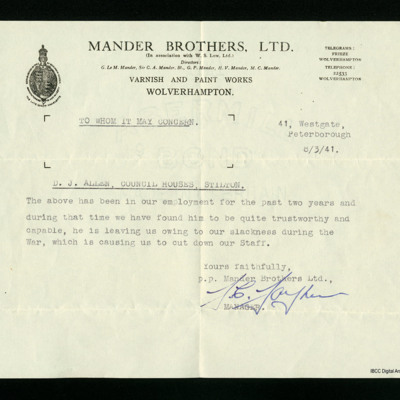 Good character reference for Derrick Allen after being laid off due to lack of work for company in wartime. 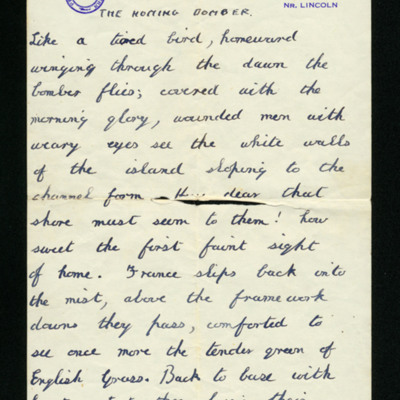 Poem written on RAF Waddington notepaper called The Homing Bomber. It describes a damaged bomber and its wounded crew making its way back to the UK. 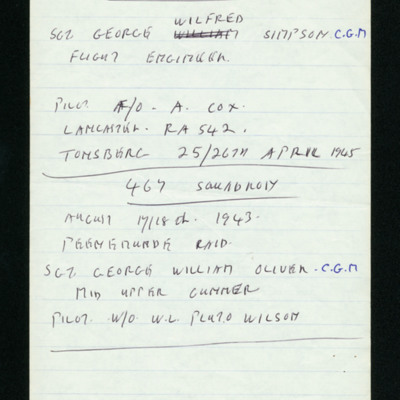 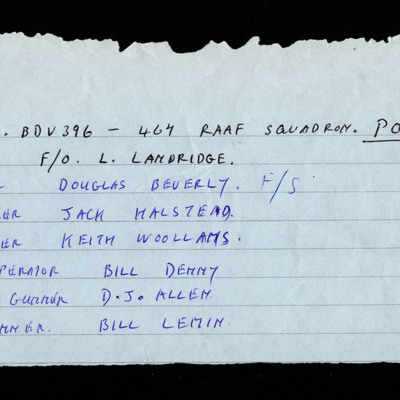 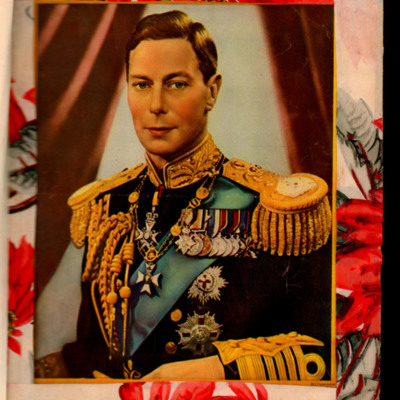 Head and shoulders portrait of King George VI in uniform of Admiral of the Fleet. In the background drawn curtains. 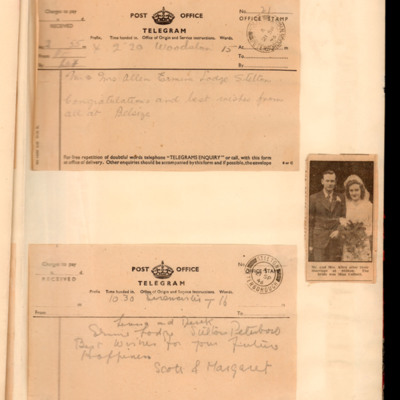 Two telegrams wishing Derrick Allen and his wife best wishes and future happiness. On the right a three-quarter length portrait of Derrick Allen in suit and his bride (was Miss Colbert) is wedding dress with bouquet. 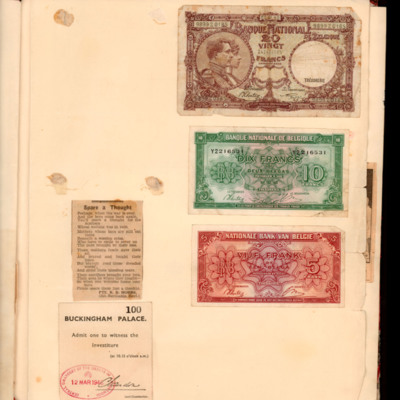 On the left a poem by Pte K R Hobbs (5th Northants Regt) entitled 'Spare a Thought' concerning mothers waiting in vain, Below ticket No 100 for entry of witness to investiture at Buckingham Palace. On the right, 20, 10 and 5 franc Belgian banknotes. 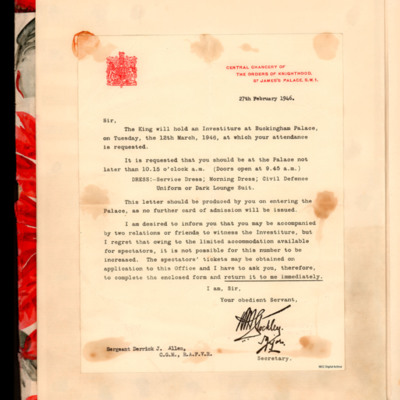 Notes that the King will hold investiture at Buckingham Palace on 12 March 1945. Derrick Allen requested to be at palace no later than 10.15. Goes on to details dress and who may accompany. 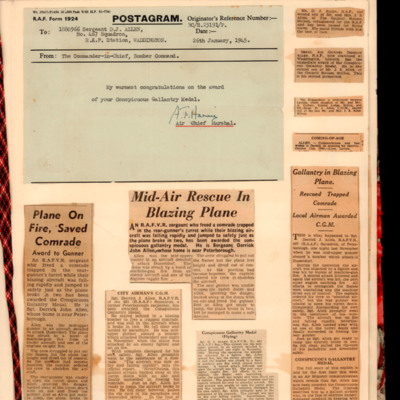 At the top a postagram congratulating Derrick Allen on his award of Conspicuous Gallantry Medal signed A T Harris. Six newspaper cuttings giving various accounts of actions in releasing rear gunner from jammed turret while Lancaster dives out of… 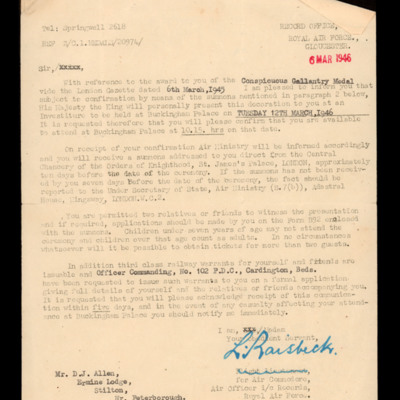 Gazetted on 6 March 1945, informs Derrick Allen that he will be awarded his medal by the King at an investiture at Buckingham palace on 12 March 1946. Goes on to discuss other relevant details concerned with investiture. 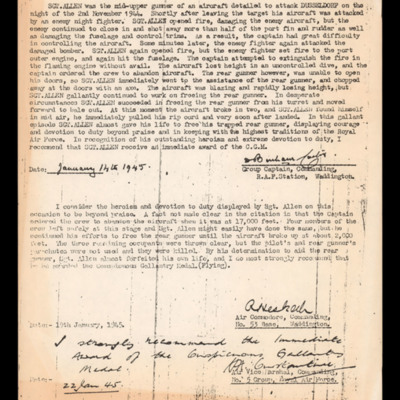 Account of night 2 November 1944. Sergeant Allen's Lancaster was attacked by night fighter after successful attack on Dusseldorf. Allen opened fire twice and damaged fighter but the Lancaster was badly damaged. Whilst Lancaster was in uncontrolled… 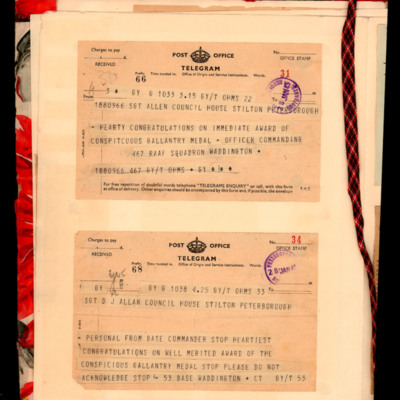 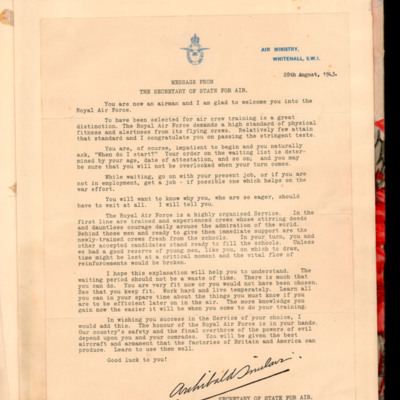 Welcome to the Royal Air Force and that selection for aircrew training is a great distinction. Explains how waiting list works and explains why he will have to wait. Encourages him to keep fit while waiting and to carry on with current job. 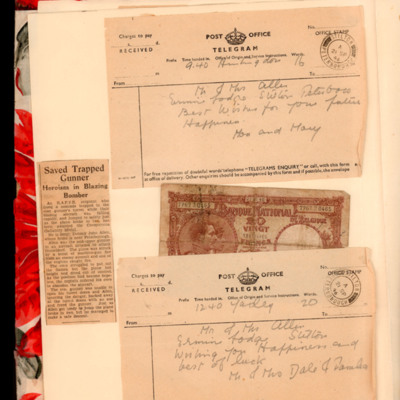 On the left a newspaper cutting with an account of how Derrick Allen freed the rear gunner from his jammed turret while his Lancaster was going down. On the right top and bottom, congratulatory wedding telegrams wishing future happiness. Between the… 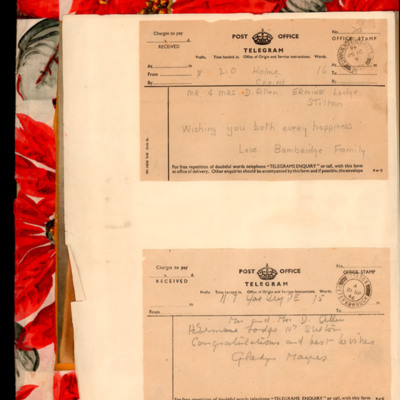 Two telegrams wishing Derrick Allen and his wife every happiness and best wishes.
View all 75 items