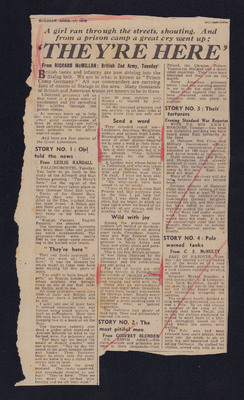 Account of British tanks driving into Stalag belt and liberating prisoners. Story of Polish girl in Fallingbostel announcing to prisoners that British tanks were here. Accounts of liberated prisoners.

A girl ran through the streets, shouting. And from a prison camp a great cry went up:

British tanks and infantry are now driving into the Stalag belt. We are in what is known as “Prison Camp Germany.” All our commanders are carrying lists of dozens of Stalags in the area. Many thousands of British and American troops are known to be in them.

Liberated prisoners tell us that there is a great wave of excitement and joy spreading like wildfire through the prison camps.

As convoys move up to help our own released war prisoners, other great convoys – some of them 20 miles long – are rolling back carrying thousands of German prisoners to the Allied captive cages.

And here are four stories of the Great Liberation.

STORY NO. 1: Girl told the news

FALLINGBOSTEL, Tuesday. You have to go back to the story of the Altmark and that famous greeting: “The Navy’s here,” for the equal of the scenes that have taken place in this German front line town.

Tanks of the Desert Rats, fighting their way from the Aller to the Elbe, crashed down the main street. A Polish girl saw them and ran as fast as she could to the great prisoner of war camp on the town’s outskirts.

The German guards hurriedly put down their rifles and pulled out white handkerchiefs. The prisoners – there were nearly 7000 in the camp – came swarming to the barbed wire fences.

Then our tanks appeared. A great cry went up: “They’re here.” It was the moment for which many of these men have been waiting for five years or more.

“You ought to have heard the yells,” and English bomber pilot, whose airplane was brought down on one of our first raids on Berlin, said to me.

All these prisoners – more than 2000 of them are British and American – have a terrible tale to tell.

I went into one of their huts. It seemed impossible that any human being could survive in such an atmosphere. More than 300 men have been living here – sleeping two in a bunk or on the floor.

The Germans recently shot dead a glider pilot captured at Arnhem because he went to the barbed wire, the prisoners said.

“Ten days ago we heard the sound of distant gunfire,” said one prisoner. “Day by day the sound of the guns became louder and louder. Then Typhoons began to circle over the camp and we knew that it was a signal that rescue was at hand.

“At last came the great moment. Our tanks appeared, and everybody shouted as one man: “They’re here.” Then we tore down the barbed wire fencing and we all went mad.”

[Missing words] were 90 men stricken with disease or wasted by malnutrition.

They crowded round me – Londoners, Scotsmen, Welshmen; soldiers and airmen from Leeds, Birmingham, Liverpool and a score of other places – begging me to send a word to their families. I wish I could give just a few of their messages, but it is not allowed. Their families must wait for the official notification.

A London man whose home is in Tottenham and who was taken prisoner at Dunkirk, said: “My wife and children must think I’m dead. I have not been able to write home for a long time.

“No letter-cards have been issued to us for weeks.

“I was in the march from East Prussia and., like everyone else, by the time I got here last month I was more dead than alive, but we began to pluck up hope again when we heard of the advance of our armies and the crossing of the Rhine.”

Among the prisoners were soldiers left behind at Dunkirk; Commandos captured on daring coast raids, Canadians, Australians and New Zealand pilots, men of the Eighth Army taken prisoner in North Africa and Italy, and glider pilots and paratroopers cut off at Arnhem.

This is the first British prisoner of war camp liberated by the advance of our armies deep into Germany, and the celebrations are still going on.

The fires of battle are still blazing fiercely in Fallingbostel, but crowds of liberated prisoners are parading the streets shouting and singing, and wild with joy.

There was an extraordinary scene last night when thousands of these lean, hungry men sacked the German town. Nearly every man came away carrying on his shoulder a great packing-case of preserved meat or canned vegetables.

The Germans had plenty of food here. They had deliberately staved these men.

STORY NO. 2: The most pitiful men

U.S. NINTH ARMY. – The slave-workers and prisoners are here in their thousands – from Poland, the Ukraine, France, Yugoslavia, Holland and a dozen other countries. They have been liberated and they are on the march.

Some American prisoners whom I met this morning seemed to me to be the most pitiful.

Since their capture they have been marched almost continuously from one place to another.

STORY NO. 3: Their torturers

WITH U.S. 9TH ARMY, HANOVER, Tuesday. – You need not disbelieve anything you have heard about Nazi barbarity to the Jews.

Eight months ago 1000 Polish and Hungarian Jews, already enslaved in their countries, were driven like cattle across Germany to this pen. Eight hundred are dead.

Many of the survivors will die now, because they are beyond hope.

German citizens of Hanover claim they knew nothing of this awful place, but at least 30 large houses of the comfort-loving, God-fearing German burghers overlook the site, and they could not have failed to see slaves crawling around the yards.

If the Nazis had really wanted work from these people they would have fed them. It is all too nauseatingly clear that they brought them here to indulge in their pathological passion for cruelty.

EAST OF HANOVER, Tuesday. – An excited civilian rushed out of the woods on to a road east of Hanover, gesticulating to a tank column rumbling forward at speed.

Sergeant Bryant Shrader, a tank commander, of B Company, 771st Tank Battalion, waved to the man to get out of the way, but the civilian began panting and scrambling alongside the vehicles.

The sergeant finally decided to stop when he discovered the man was a Pole. By an odd chance a member of the crew of the leading tank knew Polish, and to him the civilian explained he wished to warn them of a German strongpost ahead on the road, where the enemy were waiting.

The Pole, who had been released from slave-labour, went back into the woods to get on with his self-appointed task of killing Germans. He stalked his victims, armed only with an axe.