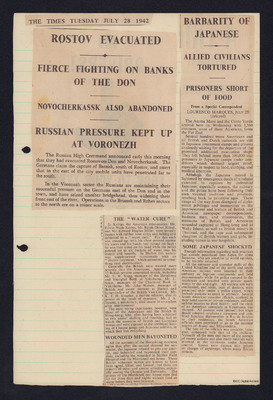 FIERCE FIGHTING ON BANKS OF THE DON

RUSSIAN PRESSURE KEPT UP AT VORONEZH

The Russian High Command announced early this morning that they had evacuated Rostov-on-Don and Novocherkassk. The Germans claim the capture of Bataisk, south of Rostov, and assert that to the east of the city mobile units have penetrated far to the south.

In the Voronezh sector the Russians are maintaining their successful pressure on the Germans east of the Don and in the town, and have seized another bridgehead, thus widening their front east of the river. Operations in the Briansk and Rzhev sectors to the north are on a minor scale.

In Keihjo, the American missionaries, Mr. Edwin Wade Koons, Mr. Ralph Oliver Reiner, and Mr. Edward Hughes Miller, were severely beaten with rubber hose strips and belting and subjected to a “water cure.” For this each was trussed up, with his chest pressed against his knees and his hands tied behind his back; he was then stood on his head while the police poured up to six buckets of water into his mouth and nostrils. In Harbin this torture was supplemented occasionally with an “electric treatment,” which amounted to something near electrocution.

Generally the British were treated more severely than the Americans. Approximately 12 British persons committed suicide, including Mr. E.W. Stagg, manager of the Hongkong and Shanghai Bank at Yokohama, Mr. L. Sykes, manager of the Chartered Bank at Yokohama, Mr. John Watson, manager of British real estate interests at Harbin and father-in-law of the British Vice-Consul. Mr. K.F.H. Krugher, a marine adjuster, died in prison as the result of exposure, Mr. J.A. Hewitt, a missionary, died insane in an asylum after imprisonment.

The most trying experiences, however, were those of the Americans and the British in Hong-kong, who, after having been subjected to two weeks’ shelling and bombing, had to watch the massacre of British and Canadian troops and were exposed to the combined looting of Chinese gangs and Japanese soldiers, in which they lost everything.

All the accounts of the Hong-kong evacuees agree that after the second demand for surrender, the Japanese refused to give any quarter, and beheaded and bayoneted their captives, including the wounded in Stanley Field Hospital and the Maryknoll rest house. Three British volunteer nurses are known to have been raped, killed, and burned; but there are reports of other and similar atrocities, especially among the Chinese and Eurasians. The priests of the Maryknoll rest house were tied up for three days and nights without food or water before they were interned.
[missing words]

From a Special Correspondent

The Asama Maru and the Conte Verde arrived here on Wednesday with 1,560 evacuees, most of them American, from the Far East.

Several hundred more Americans and all British and Dutch nationals are still in Japanese internment camps and prisons anxiously waiting for the departure of the promised additional evacuation ships. They left behind more than 100,000 war prisoners in Japanese camps under conditions which demand urgent relief, especially in respect to food, clothing, and medical attention.

Although the Japanese record is lightened by courageous deeds of kindness extended to captives by individual Japanese, especially women, the military and the police have been following their own vaunted tradition and practices, reaching back to primitive ages. These range all the way from disregard of diplomatic privileges and immunities to the imprisonment and torture of British and American newspaper correspondents, business men, and missionaries, the massacre of British and American wounded captured at Hong-kong and at Wake Island, as well as British miners in Thailand, and the rape and subsequent slaughter of British women and girls, including nurses in war hospitals.

Enough information regarding such practices has already percolated into Japan for some Japanese, who are sensitive to world opinion, to be frankly ashamed.

All the embassy and consular staffs of the United Kingdom and of the north and south American nations were interned in their embassy or legation compounds and held [italics] incommunicado [/italics] while the police camped in the residences and invaded even private apartments by day and night. All wireless sets were confiscated, and visits, even of doctors, were permitted only under a police escort, which forbade patients to speak to anybody. Several South American consular officials, confined to their hotel rooms or private residences, suffered serious injuries to their health: and the clerk of an American consulate in Yokohama was slapped. All protests were ignored; but when Brazil adopted retaliatory measures and confined Japanese diplomatists in Rio de Janeiro to their residences, the South American officials were permitted to go to the summer resorts of Atami and Miyanoshita.

The fate of the officials was enviable, however, compared with that of the civilians. Virtually all the men and many of the women of enemy nations and also many neutrals were interned in the territories under Japanese control. Scores were thrown into prison on charges of espionage, where many British remain.