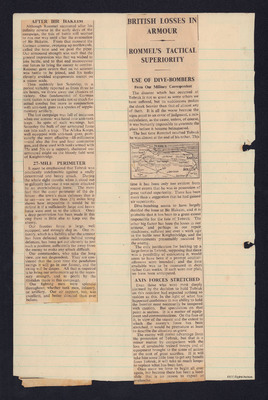 Although Rommel recovered after his definite reverse in the early days of the campaign, the tide of battle still seemed to run our way until after the evacuation of Bir Hakeim. From that moment the German armour, sweeping up northwards, called the tune and we paid the piper. Our armoured strength was such that the general impression was that we wished to join battle, and to that end manoeuvred our forces to bring the enemy to combat. Rommel gave orders that on no account was battle to be joined, and his tanks cleverly avoided engagements except on a minor scale.

Then suddenly last Saturday, in a period variably reported as from three to six hours, we threw away our chances of victory. One fundamental of German tank tactics is to use tanks not so much for actual combat but more in conjunction with anti-tank guns as a species of supplementary artillery.

The last campaign was full of instances when our armour was lured into anti-tank traps. In spite of such warnings, last Saturday the bulk of our armoured force ran into such a trap. The Afrika Korps, well equipped with anti-tank guns, particularly the most effective – 88-millimetre – and also the five and four centimetre gun, and these used with tanks armed with 75s and 50s as a support, shattered our armoured might on the bloody field west of Knightsbridge.

It must be emphasized that Tobruk was practically indefensible against a really determined and heavy attack. During the whole eight months when it stood out so gallantly last year it was never attacked by an overwhelming force. The mere fact that the outer perimeter of the defences – the town’s main defences that is to say – are no less than 27 1/2 miles long shows how impossible it would be to defend it if a sufficiently large and heavy force were sent in to the attack. Once a deep penetration has been made in this ring there is little else to keep out the enemy.

Our frontier force is large, well equipped, and strongly dug in. Our infantry, which is a liability after the armour has been defeated unless behind strong defences, has been got out cleverly to just such a position, sufficiently far away from the enemy to make any attack difficult.

Our commanders, who take the long view, are not despondent. They are convinced that the next time the pendulum swings it will go in our favour, and the swing will be deeper. All that is required is to bring our armaments up to the necessary strength, and to profit by the mistakes made in this campaign.

Our fighting men were splendid throughout, whether tank men, infantry, or artillery. Our air support, too, was excellent, and better directed than ever before.

From Our Military Correspondent

The disaster which has occurred at Tobruk is not as great as some others we have suffered, but its suddenness makes the shock heavier than that of almost any of them. It is all the worse because the signs point to an error of judgement, a miscalculation, as the cause, unless, of course, it was humanly impossible to evacuate the place before it became beleaguered.

The last time Rommel reached Tobruk he was almost at the end of his tether. This

time it has been only too evident from recent events that he was in possession of great tactical superiority. There has been more than a suggestion that he had gained air superiority.

Dive-bombing seems to have largely decided the issue at Bir Hakeim, and it is probably that it has been to a great extent responsible for the fate of Tobruk. The other big factor has been the losses in our armour, and perhaps in our repair machinery, suffered just over a week ago in the battle near Knightsbridge, and the reinforcements presumably received by the enemy.

The only justification for locking up a large force in Tobruk, supposing that there was a possibility of extricating it, would seem to have been if a prompt counter-offensive were intended; and the time available was to be measured in days rather than weeks. If such were our plan, we have been anticipated.

Even those who were most deeply alarmed by the decision to hold Tobruk on this occasion had expected nothing so sudden as this. In the light of what has happened confidence in our ability to hold the frontier must necessarily be tempered with caution. But speculation on that point is useless. It is a matter of equipment and communications. On the face of it, in view of the season and the extent to which the enemy’s force has been stretched, it would be premature at least to describe the situation as grave.

The enemy will derive advantage from the possession of Tobruk, but that is a minor matter by comparison with the loss of invaluable trained troops and of equipment brought to the scene of action at the cost of great sacrifice. If it will take him some little time to get any benefit from Tobruk, it will take us much longer to replace what has been lost.

Once more we have to begin all over again, but because there has been a landslide that is no reason to expect an avalanche.