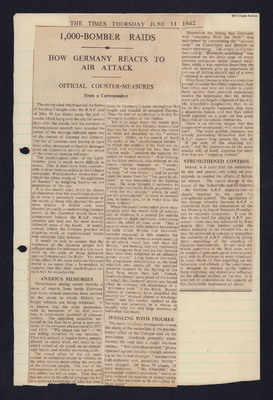 How Germany reacts to air attacks. Official counter-measure. Article discusses effect of operation against Cologne. Section on anxious memories mentions that effect casualties on eastern front and air attacks revives first world war saying "Wir siegen uns tot", "We are killing ourselves by our victories". Goes on to discuss German moral and leadership views. Section on juggling with figures discusses propaganda. Strengthening control mentions that German air raid organisation has been taken over by the SS.

HOW GERMANY REACTS TO AIR ATTACK

The strong wind which fanned the flames of burning Cologne after the R.A.F. raid of May 30 has blown away the pall of smoke which hung over the city for several days after the attack, and the cameras of reconnaissance aircraft have revealed the extent of the damage inflicted upon one of the centres of German war industry. The list of factories now known to have been either destroyed or heavily damaged gives an impressive picture of the extent of the material damage inflicted.

The psychological effect of the 1,000-bomber raids is much more difficult to assess. That if must have been considerable is clear from an article in the Cologne newspaper [italics] Westdeutscher Beobachter [/italics], in which the editor wrote of “the nightmare of Sunday” as weighing heavily on the population of the city.

It is abundantly clear, from the choice of objectives, that this psychological effect is at most a secondary consideration in the minds of those who planned the great mass attacks. If British raids were directed primarily at undermining German moral, as Dr. Goebbels would have his compatriots believe, the R.A.F. would certainly not seek out the most heavily defended areas of the Reich. It would, instead, follow the German practice of attacking small or medium-sized towns with relatively light defences.

It would be rash to assume that the resistance of the German people will collapse under the influence of a few more raids on the scale of those delivered against Cologne and the Ruhr. Yet, even if the effect of the mass raids on German moral is no more than a by-product, it remains true that their psychological results will be considerable.

Nevertheless during recent months a mass of reports from inside Germany and from neutral countries have testified to the strain to which Hitler’s unhappy subjects are being subjected. It is known that the older generation, with its memories of the first world war, is increasingly doubtful of ultimate victory. The appalling casualties sustained in the East have given a new currency to the ominous phrase heard in 1917 and 1918: “Wir siegen uns tot” – “We are killing ourselves by our victories.” Thus it is natural to inquire how a people, already so sorely tried, will react to the added ordeal of air attack on an exceedingly heavy, and steadily increasing, scale.

The moral effect of the air raids cannot be estimated except in relation to the other factors determining the attitude of the German people. The fear of the consequences of defeat is very great, and will stiffen the will to resist. That fear is due not only to the official propaganda but to a growing knowledge of what has been done in Germany’s name throughout the length and breadth of occupied Europe. Thus the fear of retribution is to-day the strongest support of the régime.

Yet it is clear from the recent pronouncements of the German leaders that they are far from happy about the moral of what are described as the “weaker natures.” Hitler, in his speech of April 26, spoke of the “psychological burden” to which the soldiers in the East are exposed, and expressed his fear that this burden might “paralyse the capacity for action of weaker natures.” And Göring, in his latest outburst, also referred to the heavy burden imposed on “weaker natures” by war conditions. “I speak,” he said “of two fronts”; and he called upon the home front for “the same hardihood” as was demanded of the fighting front. He even thought it necessary to exhort the ordinarily docile population to “obey the war decrees” which, he said, are not promulgated “in order to torment you, to annoy you, or to make your life more difficult.”

When Germany’s own rulers avow their concern over the moral both of soldiers and of civilians, it is natural for outside observers to draw optimistic conclusions about the effect of mass raids. Thus a neutral observer, with intimate knowledge of both Great Britain and Germany recently expressed in this country the opinion that the Germans would stand up to air attack much less well than the British, “not because they are necessarily less courageous than you are but because they have been subjected to an infinitely greater strain.” Long years of overwork, the progressive deterioration in the food situation, and, above all, the personal anxieties aroused by the fighting in the East have taken their toll. Indeed, Goebbels himself gave proof of the extent to which the Germans’ nerves are frayed when he ordained the observance of a “politeness week” in the Reich. Recent visitors to Germany have described the country as “strained almost to breaking-point,” and this verdict, applied to the German war economy as a whole, is equally valid for very large numbers of individual Germans.

The tenor of official propaganda reveals the alarm of the authorities at the psychological effect of the Cologne raid on the population. Goebbels promptly transformed the raid into a major German success. “Not more than seventy” planes operated against the city – though, according to the [italics] Lokal-Anzeiger, [/italics] “innumerable high-explosive and incendiary bombs” were dropped. “Mr. Churchill,” the propaganda ministry explained, “seems to have ordered the number of planes taking part in this incursion to be multiplied by 10 or more.”

Meanwhile the fiction that Germany was “returning blow for blow” was maintained by representing the “reprisal raids” on Canterbury and Ipswich as major operations. The attack on Canterbury and its “Bolshevist archbishop” was announced on the front page of every German newspaper under banner headlines, while a war reporter describing the attack on Ipswich gave an impression of swarms of raiding aircraft and of a town “reduced to smouldering ruins.”

Thus those Germans who are credulous enough to accept the official reports at their face value, and who are unable to check them against their personal experience, receive the impression that the British mass raids are largely a figment of the wily Mr. Churchill’s imagination, that, in so far as they actually happened, they were a disastrous failure, and that they called forth reprisals on a scale not less great than that of the attacks themselves.

There is an obvious danger that this imaginative propaganda will recoil upon itself. The more gullible Germans are already persuading themselves that the R.A.F. cannot long sustain the loss of “50 per cent. of the attacking aircraft,” and the continuance of the mass attacks will, of itself, disprove the story that they are “crippling failures.”

Indeed, it is clear that the authorities do not, and cannot, rely solely on propaganda to combat the effects of British air attacks. The recent change in the status of the Sicherheits-und-Hilfsdienst – the German A.R.P. organization – is clearly inspired by the need for strengthened control. The significance of this change, whereby German A.R.P. is transferred from the competence of the Air Ministry to that of Heinrich Himmler, can be variously interpreted. It may be due to the need for placing A.R.P. personnel – older men less influenced by Nazi dogma than their juniors – under the direct authority of the dreaded S.S., or it may be attributed to a desire to strengthen the authority of A.R.P. officials by giving them something of the standing of Gestapo functionaries. In any case the whole apparatus of the Nazi state, with its armies of spies and [italics] agents provocateurs [/italics] and with its [italics] Blockwart [/italics]in every street and in every block of flats reporting on the behaviour and attitude of his neighbours, is designed to prevent public opinion from exercising any deleterious influence on the efficient conduct of the war. It is wise not to underestimate the capacity of this formidable instrument of terror.