The last take off, RAF Farewell to Lancasters 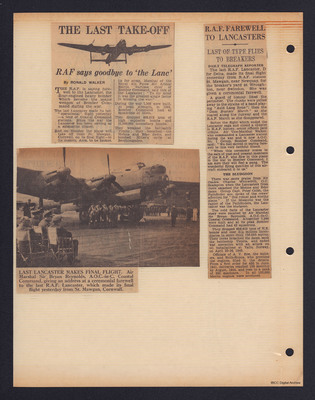 The last take off, RAF Farewell to Lancasters

Top - newspaper cutting the 'Last Take-off - RAF says goodbye to "the Lanc"' with photograph of airborne Lancaster. Describes how last Lancaster made last operational flight - a tour of Coastal Command Stations. It took off from St Mawgan and flew to Avro where it will be broken up for scrap. Comments from Sir Arthur Harris and statistics about how many aircraft built etc.

THE LAST TAKE-OFF
[picture]
RAF says goodbye to ‘the Lanc’
By RONALD WALKER
THE R.A.F. is saying farewell to the Lancaster, the four-engined heavy bomber which became the major weapon of Bomber Command during the war.
The last Lancaster made its last “operational” flight yesterday – tour of Coastal Command stations. Since the war the Lancaster has been serving as a submarine chaser.
And on Monday the plane will take off from St. Mawgan, Cornwall, on its final flight – to its makers, Avro, to be broken up for scrap. Marshal of the Royal Air Force Sir Arthur Harris, wartime chief of Bomber Command, said this of the Lancaster: “To my mind it was the greatest single factor in winning the war.”
During the war 7,366 were built. At peak strength, in 1944, Bomber Command had 42 squadrons of them.
They dropped 608,612 tons of high explosive bombs and 51,500,000 incendiary bombs.
They wrecked the battleship Tirpitz; they breached the Mohne and Eder dams, and bombed Hitler’s eyrie at Berchtesgaden.

R.A.F. FAREWELL TO LANCASTERS
LAST OF TYPE FLIES TO BREAKERS
DAILY TELEGRAPH REPORTER
The last R.A.F. Lancaster, D for Delta, made its final flight yesterday from R.A.F. station St. Mawgan, near Newquay, for the breaker’s yard at Wroughton, near Swindon. She was given a ceremonial farewell.
A guard of honour lined the perimeter. The chocks were pulled away to the strains of a band playing “Auld Lang Syne”; then the “Dam Busters’ March” as she roared along the runway and the R.A.F. March as she disappeared.
Before the flight which ended the Lancaster saga and closed a chapter in R.A.F. history, senior officers paid tribute. Air Vice-Marshal Walker, who commanded a Lancaster station during the war and is now A.O.C. No. 1 Group Bomber Command, said: “We feel moved in saying farewell to this very faithful friend.
“When this ceremony comes to the ears of past and present members of the R.A.F. who flew in this plane in the war in Bomber Command, I am sure they will feel a pang. The wonderful flying qualities of this aircraft endeared it to us.”
THE BLUDGEON
There was more praise from Air Cmdre. Charles Whitworth, O.C. Scampton when the Lancasters from there smashed the Mohne and Eder dams. Group Capt. Peter Cribb, the Pathfinder ace, spoke of the crews’ affection for “this robust and worthy plane.” If the Mosquito was the rapier of the Pathfinders, the Lancaster was the bludgeon.
The cold facts of the Lancaster story were recalled by Air Marshal Sir Bryan Reynolds, A.O.C.-in-C. Coastal Command. Altogether 7,366 were built and at its peak Bomber Command had 42 squadrons.
They dropped 608,612 tons of H.E. bombs and over 51 1/2 million incendiaries in more than 156,000 sorties. Their crews breached the dams, sank the battleship Tirpitz, and ended war operation with an attack on oil installations at Vallo, Norway, on April 25-26, 1945.
Officials of A.V. Roe, the builders, and Rolls-Royce, who provided the engines, filled in the details. From a first order for 450 in June, 1941, deliveries reached 155 monthly by August, 1944, and rose to a peak of 293 machines. In all 150,000 Merlin engines were produced.