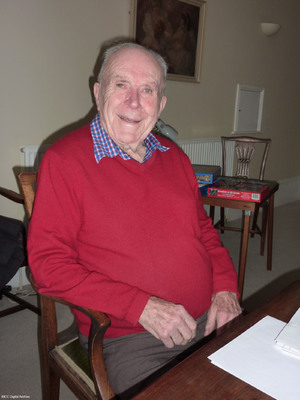 Jack Harris resumes describing his post-war career in the Royal Air Force. In October 1955, he became the commanding officer of 542 Squadron, a special duties squadron responsible for sampling radioactive fallout produced by American and Soviet atom and hydrogen bomb tests. He describes the sampling process and the impact on his health in later life. In 1957 he was promoted to wing commander and produced specifications for new aircraft until he was posted to RAF Wildenrath in 1960. In 1962, he transferred to the NATO headquarters at Fontainebleau where he was responsible for the photo reconnaissance squadrons. He was posted back to the Air Ministry in July 1965 to join the Manning Directorate, where he remained until he retired in 1967 after twenty-seven years of service. Finally, he describes his role in the formation of the 550 Squadron Association and RAF North Killingholme Association and the organisation of their annual reunions. He also details his involvement in a civilian industry based organisation called the British Hospitals Export Council.