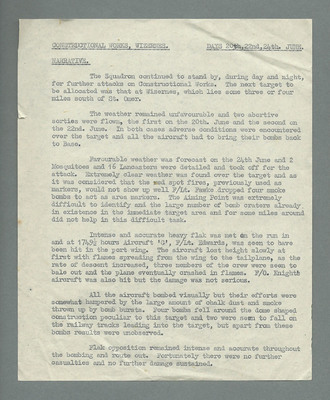 States that the next constructional works target was at Wizernes three or four miles south of St Omer. Reports two abortive sorties due to weather on 20th and 22nd June. Favourable weather forecast for 24 June. Two Mosquitos and 16 Lancasters took off for attack. Describes marking and difficulty in identifying aiming point due to large number of existing craters. Describes heavy defensive fire and one aircraft shot down and another damaged. All aircraft bombed visually but aiming hampered by chalk dust and smoke.

The Squadron continued to stand by, during day and night, for further attacks on Constructional Works. The next target to be allocated was that at Wizernes, which lies some three or four miles south of St. Omer.

The weather remained unfavourable and two abortive sorties were flown, the first on the 20th. June and the second on the 22nd. June. In both cases adverse conditions were encountered over the target and all the aircraft had to bring their bombs back to Base.

Favourable weather was forecast on the 24th June and 2 Mosquitoes and 16 Lancasters were detailed and took off for the attack. Extremely clear weather was found over the target and as it was considered that the red spot fires, previously used as markers, would not show up well F/Lt. Fawke dropped four smoke bombs to act as area markers. The Aiming Point was extremely difficult to identify and the large number of bomb craters already in existence in the immediate target area and for some miles around did not help in this difficult task.

Intense and accurate heavy flak was met on the run in and at 1749 1/2 hours Aircraft ‘G’, F/Lt. Edwards, was seen to have been hit in the port wing. The aircraft lost height slowly at first with flames spreading from the wing to the tailplane, as the rate of descent increased, three members of the crew were seen to bale out and the plane eventually crashed in flames. F/O. Knight’s aircraft was also hit but the damage was not serious.

All the aircraft bombed visually but their efforts were somewhat hampered by the large amount of chalk dust and smoke thrown up by bomb bursts. Four bombs fell around the dome shaped construction peculiar to this target and two were seen to fall on the railway tracks leading into the target, but apart from these bombs results were unobserved.

Flak opposition remained intense and accurate throughout the bombing and route out. Fortunately there were no further casualties and no further damage sustained.